We all know that CNN is one of the largest offenders when it comes to Fake News.  Jim Acosta has given up any pretense of reporting on the White House and is instead using his opportunity to be close to the Presidency to become the news himself, rather than report on the news.  But the rot goes even deeper than that.  This is what Vox Day refers to as SJW Convergence, when an organization becomes so committed to the Social Justice Narrative that they are no longer capable of performing their primary function.  CNN’s primary function is supposed to be reporting on the news.  CNN’s primary function these days seems to be attacking Donald Trump and supporting a left wing narrative that Christian Morality is no longer desirable or somehow a negative influence on society.
Take this article:  Cuckolding can be positive for some couples, study says 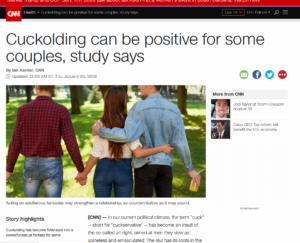 The article is presented as health news.  It even has a picture of a normal couple with an extra man tacked on.  But when you click on the link, you discover that the study they are talking about is entitled “The Psychology of Gay Men’s Cuckolding Fantasies”.  This is a dishonest representation of what they are “reporting” on.  Marriage is a Holy institution, ordained by God Himself as a union between a Man and a Woman.  In fairness, if you actually read the article it does discuss that the fantasies of gay men are not relevant when discussing normal men.  But how many people are going to get past the opening picture and the first paragraph?  It’s a subtle and dishonest attempt to spread misinformation throughout our culture.  And it’s a danger that we all need to be aware of.

Video: The Western Tradition, part 18 – The Age of Charlemagne