Given the audience here at Men Of The West, I think it’s safe to assume that most everybody is familiar with the story of Elijah on Mount Carmel (If you are not, the account is recorded in 1 Kings 18).  Elijah is remembered as one of the greatest Old Testament prophets.  Because the odds were against him and he showed up anyway.  But, over time,  the odds being against him wore on Elijah.  And in the aftermath of the great triumph God handed him at Mount Carmel, we see Elijah fleeing for his life, certain that Jezebel was going to kill him.  And we have it recorded that God didn’t chastise Elijah for his lapse of faith, what God had to say was, “Arise, eat, because the journey is too great for you.” (1 Kings 19:7).  Being outnumbered was truly demoralizing for Elijah, even though he had just been handed a tremendous victory. 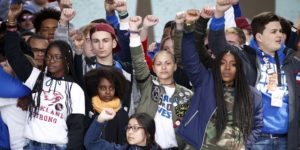 We have seen this weekend the so called “March For Our Lives”.  Organized by the usual bunch of leftists, the purpose of this march is singularly to trick you into falling into the same trap that befell Elijah.  To make us believe that we are alone and isolated.  And it is a powerful weapon in the enemy’s hands.  It is for this reason that we are commanded to seek the fellowship of other believers ( not forsaking our own assembling together, as is the habit of some, but encouraging one another; – Hebrews 10:25).
But we are not alone.  Aside from the fact that God will never forsake us, there are far more of us than we get credit for.  The media likes to use misleading camera angles to imply that the crowds at these events are larger than they really are, or smaller than they really are (some of the Trump and Clinton rally pictures come to mind as good examples of this sort of misleading reporting).  It is absolutely vital that the believers seek out others to encourage them.  If you aren’t engaged in the Body of Christ, the time has come to Shut Up And Go To Church.  It doesn’t matter if you feel like you need to go church or not.  The Church needs you.
This past Sunday was Palm Sunday, marking the triumphal entry of Jesus into Jerusalem.  Next Sunday, we celebrate His victory over death and hell.  There are so many people who only go to church on Christmas and Easter.  If you are one of them, this time, make a commitment to go every Sunday.  Christ went to the Cross to redeem us from our sins.  The Church needs you.  Volunteer to help with something.  Jesus voluntarily took up a Cross.  Is it really too much to ask that you put forward your best effort to support His Church?
Somewhere, there is somebody who is watching the world on the march and they feel alone and isolated.  Don’t fall into the trap that has been laid before us.  Join with your brothers and sisters in Christ to preserve a country where we are free to give Him the Honor that is due.