As I write this, it is the evening of September 27th.  It just was announced that the Senate has the votes to push Kavanaugh through.  Which  is a good thing, because we simply cannot allow the behavior that the Democrats have engaged in to be rewarded.  It has been a disgusting display.  It was so disgusting that Lindsey Graham, a man who is notorious for his willingness to compromise, has reached his breaking point and has become the man of the hour in his rant on his utter disgust.  The Democrats have ceaselessly demanded an FBI investigation.  Lets just get something clear for a moment. If the lady doesn’t remember exactly where she was, when it was, and the people she cites as witnesses all say it never happened, the investigation is over. In order to investigate anything further, you would have to know where or when so that you’d have some chance of ever finding another witness. She doesn’t remember. It’s over. Done. Finished. 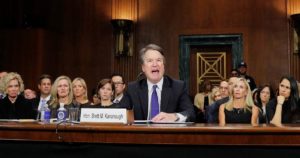 My take on Dr. Christine Ford is that she is an emotionally damaged woman who at some point probably had something bad happen to her.  But her story isn’t corroborated by the witnesses that she herself said were there.  In fact, the witnesses signed statements under the penalty of perjury saying that it never happened.   Yet, the Democrats leaked her name to the media and sicked the lyin’ press on her.  There is no way that Dianne Feinstein did not know how damaged Christine Ford is.  There is no way that Dianne Feinstein didn’t know that this woman’s claims were dubious at best.  This was an exceptionally cynical ploy by the Democrats to try to stall this nomination indefinitely and ruin people’s lives.
What we are seeing can only be described as evil.  There are reasons why we expect for there to be multiple witnesses before we believe an accusation.  The presumption of innocence is vital to our system of government.  The unfortunate reality is that people lie.  And women are people.  People lie for all sorts of reasons.  If somebody makes an accusation you have to evaluate the credibility of the allegation.  We saw even the New York Times reach the point where they wouldn’t join in on this smear campaign because the allegations were so frivolous that they couldn’t find even a fig leaf to hide behind.  That is how far down the rabbit hole this has gone.  The New York Times finally found a lie they wouldn’t repeat about a conservative.
I not only hope that Brett Kavanaugh is a successful Supreme Court Justice, I hope that the Republicans in the Senate censure the Democrats who spread this slander and used a broken woman for their sinister ends, and expel from the body Diane Feinstein, the mastermind of this travesty.

When A Righteously Angry Man Awakens