Editor’s note: The following is extracted from Under the Stars and Bars, by Walter A. Clark (published 1900).  All spelling in the original.

It was the winter of ’64, and to those of us who wore the gray it was likewise the “winter of our discontent.” The hopes of the Confederacy were on the wane. The clouds that hung above it had no silver lining, free or otherwise. Sherman was “marching through Georgia,” leaving in his wake the ashes of many a Southern home. Hood’s reckless raid on Nashville had ended in disaster and his ragged battalions were making tracks for the Tennessee river, (some of them with bare feet) at a quickstep known to Confederate tactics as “double distance on half rations.” The morale of the army was shattered if not destroyed. If the soliloquy of a gaunt Tennesseean as he rose from a fall in the mud on the retreat fairly represented the sentiment of his comrades, it was badly shattered. He is reported to have said: “Ain’t we in a —— of a fix, a one-eyed president, a one-legged general and a one-horse Confederacy.”

The Oglethorpes had fortunately escaped the butchery at Franklin against which Forrest had so strongly protested. As this immunity was due to our having been detained with Smith’s brigade to ferry a salt train across the Tennessee river, salt had literally “saved our bacon.”

After rejoining the army, we had been again detached to operate under Forrest near Murfreesboro and in this way had missed the rout at Nashville. Aside from these immunities the campaign had been one of exceptional hardships. The weather was bitterly cold and our wardrobes were not excessively heavy. The writer wore a thin fatigue jacket, with no overcoat and slept under a single blanket with the thermometer at nine degrees above zero. For a week prior to the retreat we had been engaged in the pleasant pastime of handling with ungloved hands, railroad ties and rails encased in sleet and snow. In addition to these hardships our commissary department was but illy supplied. And yet I cannot recall a single complaint made by a soldier during that campaign. It is my deliberate conviction, based upon this and similar evidence, that the Confederate soldier fought harder on shorter rations and grumbled less under greater privations than any soldier in history. The battle of Nashville opened on the morning of December 15th and for two days, thirty miles away, we listened to the thunder of the artillery and anxiously awaited the issue. At 1 a. m. Dec. 17th we were aroused to begin the longest, hardest forced march of our four years’ service. Columbia, the point of junction with Hood’s retreating army, is sixty miles away and we have to make it in forty-eight hours or run the risk of almost certain capture by a force ten times our own. It is cold, dark and raining—a dreary combination. The roads are a mass of mud and before we have tramped a mile one of my shoe strings breaks, leaving the shoe imbedded six inches deep in the yielding soil. Fishing it out, I resume the march with one bare foot, but the rocks in the mud cut and bruise it at every step and I am forced to stop for repairs. Taking the strap from my rolled blanket, slits are cut in the flaps of the shoe, the strap is buckled around so as to hold it in place, and I hurry forward to rejoin my command. For twenty-one hours we plow wearily through the mud, camping at 10 p. m. after marching 35 miles. Dr. McIntyre, in one of his Lyceum lectures, says that he had no proper appreciation of either absolute silence or absolute darkness until he stood within the central chamber of the Wyandotte cavern. If he had tramped with Forrest that winter day he would probably have added to his experience an adequate conception of absolute fatigue.

Five hours’ rest and we are again on the march, but with slower step, for the strain of the previous day has told on the boys. In the early morning we halt to rest and I breakfast on an ear of corn picked up by the roadside, smearing it with black grease scraped from the bottom of my frying pan. About midday Forrest dismounts a number of his cavalry and gives up his own horse for a time to help the “barefoot” brigade along. By 10 p. m.we have made 25 miles and are completely fagged. Only five of the thirty Oglethorpes reach camp that night, Dick Morris, the writer, and three others whose names I do not recall. Dick is short-limbed, but he has the grit and the habit of getting there. On reaching Columbia we are assigned to the rear guard under Forrest and Walthall, who are instructed by Hood to sacrifice every man in the command if necessary to ensure the safety of his army. Manning trenches half filled with snow and holding the enemy in check for a few days so as to give Hood a fair start in the race, we begin our retreat Dec. 22 and on Christmas Eve camp near Pulaski, Tenn. Coiled up in a single blanket on the cold, bare ground, no visions of Santa Claus nor hopes of a Christmas menu on the morrow brighten our dreams.

Early Christmas morning we are gathered around the camp fire awaiting orders to march. Frank Stone, tall and thin, so thin that Charlie Goetchius had advised him always to present a side view to the enemy, as a minie ball would never reach his anatomy in that position, ambles up on a horse he had secured from one of the cavalry. Frank had tried manfully to keep up with the procession. Half sick, his shoes worn soleless and his feet lacerated and bleeding, he had marched when every step was agony and had crawled over the rocky portions of the road on his hands and knees until human nature could endure no more. Fortunately one of Forrest’s cavalry gave him a lift that saved him from a Northern prison. Frank had no saddle and to supply that need the boys had piled his steed with blankets to a depth of five or six inches. As he rode up his eye fell on a lot of cooking utensils that had to be left for lack of transportation, and turning to Will Daniel he said, “Lieutenant, hadn’t I better take along some of these?” Gen. Forrest was standing a few feet away, grave and silent. Attracted by Frank’s question, he turned and inspecting the blanket outfit for a moment he said, “I think you’ve got a —— sight more now than you’re entitled to.” Frank made no reply, but the criticism was thoroughly unjust for no truer, braver soldier wore the gray.

The bugle sounds and we are again on the march. About midday we halt on the summit of a ridge with an old line of breastworks skirting its crest. Glad to have a rest we adjust ourselves to take advantage of the respite, when the ominous “Fall in,” “Fall in” comes down the line. The ranks are hastily formed, the trenches are manned and Morton’s battery is planted a short distance in their rear and commanding the road. Our regiment is placed as a support for the battery and as we line up, Forrest passes us on foot going to the front in a half bent position. Reaching the trenches he watches the advance of the enemy for a few minutes and then hurries to the rear. In a moment we hear the clatter of a horse’s feet and the “Wizard of the Saddle” dashes by at half speed, riding magnificently, his martial figure as straight as an arrow and looking six inches taller than his wont, a very god of war, yelling as he reaches the waiting ranks: “Charge!” “Charge!” “CHARGE!” Over the breastworks flashes a line of gray and down the slope they sweep, yelling at every step. The captain commanding our regiment is undecided as to his duty, but finally orders us to retain our position in the rear of the battery. Just then Gen. Featherston rides up, “What regiment is this?” “63rd Ga.” “What are you doing here?” “Supporting this battery.” “Battery the d—l. Get over them breastworks and get quick,” and we “get.” But the skirmish is soon over. The Yankees have fled, leaving a piece of artillery and a number of horses in our possession.

We hold our position until late in the afternoon, when “Red” Jackson, with his cavalry, relieves us and we resume the march. As we are filing off the enemy reappears and the cavalry carbines are waking the echoes. We are directly in the line of fire and the hiss of the minies does not make pleasant music to march by. But Jackson repels the attack and we have no further trouble with our friends, the enemy. Night comes on and if there was ever a darker or more starless one I can not place it. Tramping, tramping in the cold and mud and darkness, companies and regiments are all commingled and no one knows where he is, or where he ought to be. Too dark to see the file next in front, we walk by faith and not by sight. Elmore Dunbar was carrying the colors and but for his occasional whistling imitation of the bugle call in order to let us know “where he was at,” our regiment would have lost in the darkness all semblance of its organization. I can not well conceive how a larger share of unadulterated physical comfort could have been compressed into the five solid hours for which we kept it up.

At 11 p. m. we are ordered to halt, and camp near Sugar Creek. The sound never was more welcome, nor fell more sweetly on our ears than on that Christmas night. Dinnerless and supperless and completely worn out we hailed it with almost rapture for it brought the promise of rest and sleep. Of all the Christmas days that have come to me in life, only this stands out in gloomy prominence as utterly wanting in every element of the season’s cheer and gladness. Yet looking backward through the mists of more than thirty years, recalling all its dangers and discomforts, its toil and weariness and hunger, I would not if I could blot that day’s record from my memory, for o’er its somber shadows fell and falls today the light that comes to every true heart in the path of duty; while gilding all its gloom there comes across the waste of years a vision of the knightly Forrest, the bravest of the brave, for as he rode the lines that day, the light of battle in his eye and the thunderous “Charge!” upon his lips he rode into my heart as well, the impersonation of chivalry, and rides there still. 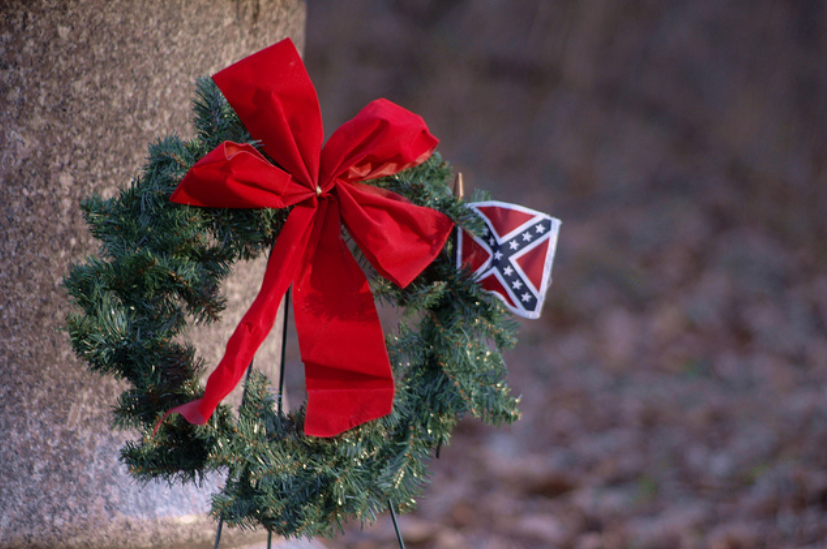