Last Friday, the Department of Justice announced that they would graciously allow the United States Congress access to their secret files.  They referred to this as “An extraordinary accommodation” only after House Oversight Committee Chairman Devan Nunes apparently sent them a strongly worded letter and it actually worked.  Now, in case you failed your high school civics class, the United States Congress has the responsibility and authority of  oversight of all federal agencies.
The question that must be asked, and seems to be ignored by most of the media, is on what grounds does ANY Federal Agency withhold information from the Congress when it is demanded of them?  The Congress has certain rules regarding which committees can request what and which federal agencies are under the oversight of which committee.  Usually, there is a committee in each house of the Congress responsible for oversight of particular functions of the Federal Government.   As long as the Congress follows their own rules regarding which committees have oversight of which agencies, there should be no question as to whether or not an agency should turn information over when it is demanded of them.
This has turned into a longstanding issue.  Eric Holder, as Attorney General, refused to turn over documents on the Fast and Furious scandal, and became the first Attorney General to be held in Contempt of Congress.  It is truly a shame that the Congress stopped there.  They should have impeached him for his impertinence.
The Congress has failed to enforce their authority, and they have failed to pass a budget.  In fact, the United States has not had a budget since 2009.  It’s 2018.  In one more year that will be a decade.   The Congress represents the people of the United States and it is past time they start looking out for our interests.
It seems that the only “Extraordinary accommodation” going on here is the Congress accommodating out of control federal agencies.  And it needs to stop.  Now.  And it seems that Donald Trump himself is not too happy with the DOJ’s foot dragging in this matter. 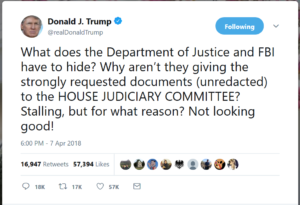 We have a President who is famous for firing people.  Maybe he’ll see this article.  Make not cooperating with the Congress a firable offense again!  DRAIN THE SWAMP!