This is just one of the many gems the author pulls from books written in the early 20th Century. In the book What’s Wrong With China by Paul Midler, the author explores some of the myths we tell ourselves about China and the current trade deals being negotiated. He does this with some insightful stories he has lived and that his friends have related to him. These stories do well to illustrate the points the author is trying to drive home to the readers.

Early on I was reminded of a scene from the show The Closer, starring Kyra Sedgwick. In the scene Sedgwick’s character asks another character, “If we all stop lying to each other, how will we ever get to the truth?” This is an apt metaphor for the lesson of the book. 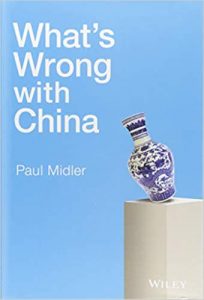 In broad strokes, this book explores the trouble that develops when a low trust society and a high trust society attempt to do business. One side is assuming that the other is lying and trying to seek an advantage over them. The other side assumes that a deal is a deal, and that contracts will be honored. It goes further than that, in that it allows the latter group to make mistakes regarding the motivations of the former. Specifically, the Chinese have developed a particular method of flattery that is designed to manipulate the newcomers into looking the other way.

For example, Midler writes, “Chinese factory bosses are better at guilt tripping than Jewish Grandmothers. They are especially skilled at eliciting unnecessary apologies and they enjoy capturing the moral high ground, especially when it was not theirs in the first place.”

The book starts with a story about the author when he went to a class on how to speak Mandarin. The teacher asked him why he came back to China. He didn’t have an answer, so the teacher recommended that he tell people who ask, “I am on the Pirate Ship.” This was a reference to the story about someone riding on the back of a tiger, who was unsure how to get off the back of the tiger. The author explains that he was unsure about her exact meaning, was China the Pirate Ship?

The book flows very well. It goes from stories about things that happened in China to the author’s thoughts about the Chinese Social Culture. He puts quotes from missionaries, traders and government officials from the West into the book. Unfortunately, these quotes often come from the time before Mao came to power. It is important to note, however, these quotes all still apply to what the author has experienced in modern day China.

One of the best examples of how the Chinese perceive actions very differently than Americans is from a scandal where someone was creating fake invoices to funnel money to himself on the side. When he was found out, the authorities were trying to track him down. It came out eventually that the Chinese General Manager working for the foreign company was leaking information to the fraudster. Not because he liked the man who had faked the invoices, but because they feared the man had done so much damage to the company that it might not recover. So, if they needed help getting another job later it was possible that the scamp who had caused all the trouble would land on his feet and they might need a job with him in the future.

After finishing I can honestly say this book illustrates not only why the Chinese will fail, but also why they appear to be winning today. The Chinese are not a culture that builds things to last. They may have been, a few centuries ago, but they are not that way today. They build things quickly and without much care for their lasting value. They tear down and replace things when they are outdated or falling apart. This short sighted approach leads not to awe-inspiring Gothic churches and Tibetan temples, but to fly-by-night circus entertainment. It gives the illusion of wealth and prosperity without the foundation to sustain it across generations.

The Bible teaches us to be people of honor who deal honestly with others.
Luke 6:38 “Give, and it will be given to you. They will pour into your lap a good measure—pressed down, shaken together, and running over. For by your standard of measure it will be measured to you in return.”

Proverbs 20:10 “Differing weights and differing measures, Both of them are abominable to the Lord.”

Proverbs 20:23 “Differing weights are an abomination to the Lord, And a false scale is not good.”

Leviticus 19:36 “You shall have just balances, just weights, a just ephah, and a just hin; I am the Lord your God, who brought you out from the land of Egypt.”

These verses are a foundational building block of Western Civilization. Without this belief, without the idea that a contract is binding and that a man’s word is his bond, society will crumble under the weight of the lies and distrust. Remember:

“Distrust saps the foundation of things.”