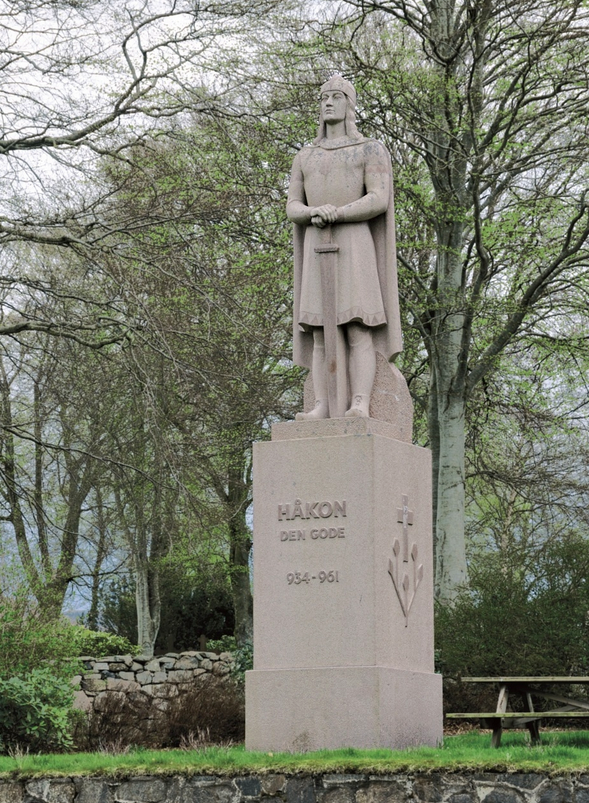 Editor’s note:  The following is extracted from Early Kings of Norway, by Thomas Carlyle (published 1800).  All spelling in the original.


Eric Blood-axe, whose practical reign is counted to have begun about A.D. 930, had by this time, or within a year or so of this time, pretty much extinguished all his brother kings, and crushed down recalcitrant spirits, in his violent way; but had naturally become entirely unpopular in Norway, and filled it with silent discontent and even rage against him. Hakon Fairhair’s last son, the little foster-child of Athelstan in England, who had been baptized and carefully educated, was come to his fourteenth or fifteenth year at his father’s death; a very shining youth, as Athelstan saw with just pleasure. So soon as the few preliminary preparations had been settled, Hakon, furnished with a ship or two by Athelstan, suddenly appeared in Norway got acknowledged by the Peasant Thing in Trondhjem “the news of which flew over Norway, like fire through dried grass,” says an old chronicler. So that Eric, with his Queen Gunhild, and seven small children, had to run; no other shift for Eric. They went to the Orkneys first of all, then to England, and he “got Northumberland as earldom,” I vaguely hear, from Athelstan. But Eric soon died, and his queen, with her children, went back to the Orkneys in search of refuge or help; to little purpose there or elsewhere. From Orkney she went to Denmark, where Harald Blue-tooth took her poor eldest boy as foster-child; but I fear did not very faithfully keep that promise. The Danes had been robbing extensively during the late tumults in Norway; this the Christian Hakon, now established there, paid in kind, and the two countries were at war; so that Gunhild’s little boy was a welcome card in the hand of Blue-tooth.
Hakon proved a brilliant and successful king; regulated many things, public law among others (Gule-Thing Law, Frost-Thing Law: these are little codes of his accepted by their respective Things, and had a salutary effect in their time); with prompt dexterity he drove back the Blue-tooth foster-son invasions every time they came; and on the whole gained for himself the name of Hakon the Good. These Danish invasions were a frequent source of trouble to him, but his greatest and continual trouble was that of extirpating heathen idolatry from Norway, and introducing the Christian Evangel in its stead. His transcendent anxiety to achieve this salutary enterprise was all along his grand difficulty and stumbling-block; the heathen opposition to it being also rooted and great. Bishops and priests from England Hakon had, preaching and baptizing what they could, but making only slow progress; much too slow for Hakon’s zeal. On the other hand, every Yule-tide, when the chief heathen were assembled in his own palace on their grand sacrificial festival, there was great pressure put upon Hakon, as to sprinkling with horse-blood, drinking Yule-beer, eating horse-flesh, and the other distressing rites; the whole of which Hakon abhorred, and with all his steadfastness strove to reject utterly. Sigurd, Jarl of Lade (Trondhjem), a liberal heathen, not openly a Christian, was ever a wise counsellor and conciliator in such affairs; and proved of great help to Hakon. Once, for example, there having risen at a Yule-feast, loud, almost stormful demand that Hakon, like a true man and brother, should drink Yule-beer with them in their sacred hightide, Sigurd persuaded him to comply, for peace’s sake, at least, in form. Hakon took the cup in his left hand (excellent hot beer), and with his right cut the sign of the cross above it, then drank a draught. “Yes; but what is this with the king’s right hand?” cried the company. “Don’t you see?” answered shifty Sigurd; “he makes the sign of Thor’s hammer before drinking!” which quenched the matter for the time. 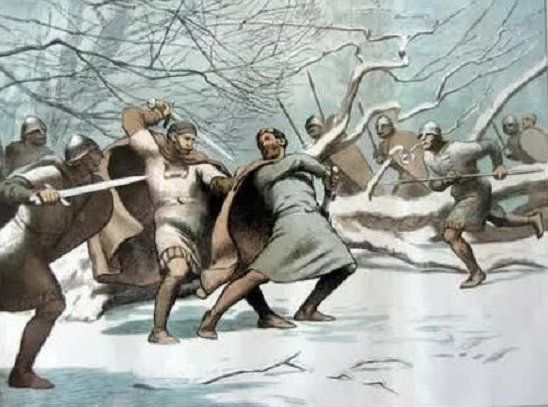 Snorro considers the fall of these two champion uncles as the crisis of the fight; the Danish force being much disheartened by such a sight, and King Hakon now pressing on so hard that all men gave way before him, the battle on the Ericson part became a whirl of recoil; and in a few minutes more a torrent of mere flight and haste to get on board their ships, and put to sea again; in which operation many of them were drowned, says Snorro; survivors making instant sail for Denmark in that sad condition.
This seems to have been King Hakon’s finest battle, and the most conspicuous of his victories, due not a little to his own grand qualities shown on the occasion. But, alas! it was his last also. He was still zealously directing the chase of that mad Danish flight, or whirl of recoil towards their ships, when an arrow, shot Most likely at a venture, hit him under the left armpit; and this proved his death.
He was helped into his ship, and made sail for Alrekstad, where his chief residence in those parts was; but had to stop at a smaller place of his (which had been his mother’s, and where he himself was born)—a place called Hella (the Flat Rock), still known as “Hakon’s Hella,” faint from loss of blood, and crushed down as he had never before felt. Having no son and only one daughter, he appointed these invasive sons of Eric to be sent for, and if he died to become king; but to “spare his friends and kindred.” “If a longer life be granted me,” he said, “I will go out of this land to Christian men, and do penance for what I have committed against God. But if I die in the country of the heathen, let me have such burial as you yourselves think fittest.” These are his last recorded words. And in heathen fashion he was buried, and besung by Eyvind and the Skalds, though himself a zealously Christian king. Hakon the Good; so one still finds him worthy of being called. The sorrow on Hakon’s death, Snorro tells us, was so great and universal, “that he was lamented both by friends and enemies; and they said that never again would Norway see such a king.”
Share this