Ok, on the Colin Kaepernick and police shootings of unarmed suspects because of racism:
I’ll preface this long post by pointing out that I’ve done quite a bit of criminal defense work and I regularly post articles critical of police brutality, abuse, and such. I posted one yesterday pointing out that the militarization (and related aggression) of police in this country is bad for both civilians AND the reputation of police departments. I am very bothered by police misconduct and constitutional violations. In other

words, I’ve taken an interest in the stats and evidence related to these issues for quite some time.
The evidence is that Kaepernick is actually NOT “woke” and he’s protesting a relatively minor issue (in the overall scheme of problematic issues) for the wrong reason.
Shocker: The stats show that a non-white officer is MORE likely to shoot a black or Latino suspect than a white officer is.

“New research reports that, while some officers may by driven by personal prejudice, the bias that can serve as a catalyst for killings is more institutional than individual…
“White officers do not kill black suspects at a higher rate compared with nonwhite officers,” concludes a research team led by Charles Menifield, dean of the School of Public Affairs and Administration at Rutgers University–Newark. “The killing of black suspects is a police problem, not a white police problem.”…
Menifield and his colleagues constructed a database of all confirmed incidents in which deadly force was used by police in the United States during 2014 and 2015…
The victims were overwhelmingly male (95.5 percent), and less than 1 percent were unarmed at the time of the incident. “The gun could been in the car, or on them, but it was there at the time they were killed,” Menifield noted…
Crunching the numbers, the researchers report “white police officers actually kill black and other minority suspects at lower rates than we would expect if killings were randomly distributed among officers of all races.”
In contrast, “we find that nonwhite officers kill both black and Latino suspects at significantly higher rates than white officers,” they write. “This is likely due to the fact that minority police officers tend to be assigned to minority neighborhoods, and therefore have more contact with minority suspects.”

“… when it comes to the most lethal form of force — police shootings — the study finds no racial bias.
“It is the most surprising result of my career,” said Roland G. Fryer Jr., the author of the study and a professor of economics at Harvard. The study examined more than 1,000 shootings in 10 major police departments, in Texas, Florida and California…
In shootings in these 10 cities involving officers, officers were more likely to fire their weapons without having first been attacked when the suspects were white. Black and white civilians involved in police shootings were equally likely to have been carrying a weapon. Both results undercut the idea of racial bias in police use of lethal force…
But police shootings are only part of the picture. What about situations in which an officer might be expected to fire, but doesn’t?…
Mr. Fryer found that in such situations, officers in Houston were about 20 percent less likely to shoot if the suspects were black. This estimate was not precise, and firmer conclusions would require more data. But in various models controlling for different factors and using different definitions of tense situations, Mr. Fryer found that blacks were either less likely to be shot or there was no difference between blacks and whites.”

But consider that police also kill unarmed white suspects in the following numbers:

That’s a total of 102 unarmed whites killed by police in the same time period. Yes, it’s lower per capita. It also shows that police aren’t shooting only minorities that are unarmed.
And let’s put the problem in context. 19 unarmed blacks and 22 unarmed whites were killed by police in 2016. That’s a total of 41 deaths.
37,461 people died in auto accidents in 2016. 17,250 people were murdered in 2016. For the last 20 years, the total murders per year has basically fluctuated between 14,000 and 17,000.

Here’s another shocker from another African-American professor:
“Each year, roughly 7,000 blacks are murdered. Ninety-four percent of the time, the murderer is another black person. According to the Bureau of Justice Statistics, between 1976 and 2011, there were 279,384 black murder victims. Using the 94 percent figure means that 262,621 were murdered by other blacks. Though blacks are 13 percent of the nation’s population, they account for more than 50 percent of homicide victims… 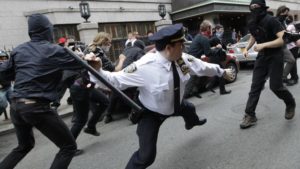 The magnitude of this tragic mayhem can be viewed in another light. According to a Tuskegee Institute study, between the years 1882 and 1968, 3,446 blacks were lynched at the hands of whites. Black fatalities during the Korean War (3,075), Vietnam War (7,243) and all wars since 1980 (8,197) come to 18,515, a number that pales in comparison with black loss of life at home. It’s a tragic commentary to be able to say that young black males have a greater chance of reaching maturity on the battlefields of Iraq and Afghanistan than on the streets of Philadelphia, Chicago, Detroit, Oakland, Newark and other cities.”
Kaepernick is spending a lot of time protesting approximately 25 police shootings a year – because of alleged racism which isn’t supported by the evidence. There are much larger problems in the country to deal with… and he’s approaching it from the wrong perspective. He’d be better off protesting the militarization of police, no-knock raids, use of SWAT to serve search warrants, etc… He’d likely accomplish more by working with black communities to reduce crime rates in those communities.

But those things aren’t “sexy”. Claiming racism as the chief underlying cause of police shootings gets more headlines. And stirs up racial animosity.

Hymn: Are You Washed In The Blood?