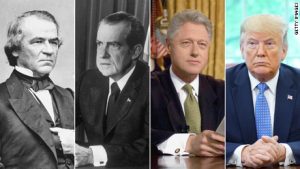 The house is NOT an impartial grand jury any more than the Senate is an impartial petit jury. Neither are. And in the current political theater/fiasco, we’re almost certainly going to see the Republican held Senate refuse to convict now that the Democrat held House has charged. And everyone who understands the system knew months ago that if the Dems went forward with impeachment, that would be the outcome in both legislative bodies.
And if control of the two legislative bodies were switched, there’s no doubt that Trump (and Clinton) wouldn’t have been impeached.
If the outcome of a grand jury is already known before the votes are cast, then it’s fixed. If the outcome of a petit/trial jury is already known before the votes are cast, then it’s fixed.
And it’s fixed because almost all the politicians in D.C. have zero actual principles that they stand by. If they did, the votes wouldn’t be split down party lines. The applicable law would be applied impartially by each member regardless of party, and you’d see either most people of both parties voting one way, or you’d see splits in the vote near the middle in both parties.
There’s a principle in civil law called “unclean hands”. Basically, if you file suit against someone and the jury concludes that you also did bad things related to the suit, then the jury can legitimately refuse to give you anything even though the person you sued actually did wrong you.
“For example, the plaintiff might bring a breach of contract suit against the defendant. However, if the plaintiff acted in bad faith when initially drafting the contract, then the defendant can raise the unclean hands defense, among other potential defenses.”
https://www.upcounsel.com/unclean-hands
Virtually every elected official in the House and Senate has cut deals against the stated principles they campaigned on. Virtually every elected official in the House and Senate has proposed or voted for something that is patently unconstitutional (IMO, Trump has done that re: firearms laws, for one example of likely many). The idea of using political power to gain political advantage is common, everyday practice in D.C. – yet half the people involved are pretending it never happens because it’s politically convenient right now. 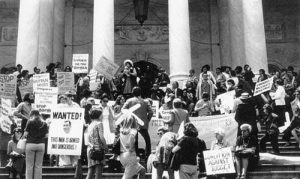 We ought to be impeaching and convicting (or expelling, in the case of Congress) a lot more politicians for refusing to uphold their oath to support and defend the constitution. And that would be most of them. If the powers that be in D.C. want to start impartially impeaching and convicting lots of politicians for lots of things, I’m on board.
But until we take it seriously and start doing that (and “we” can’t really do anything about it – the powers that be will protect their own), I’m going to sit back alternately amused and discouraged at the continued hypocrisy in D.C. If they want to impeach and convict Trump for what he’s done… well, Christ said something I’d argue is applicable to the situation (and I’ve got no objection to applying it to Clinton’s case back in the day, as well):
“Let him who is without sin among you be the first to throw a stone at her.”
Virtually all of them have done similar things to Trump and Clinton – albeit perhaps on a smaller scale. A pox on both their houses for their unclean hands in participating in such a biased and partial process.
Oh yea – I DO have a solution to propose re: the biased and partial nature of the impeachment and trial proceedings. Let’s amend the Constitution and get the politicians out of the process completely. Since we mostly have a two party system, anytime a politician from one of those two parties is up for impeachment and/or trial, put a bunch of US citizens who are registered as third party or independent voters on the grand jury and let them decide whether or not there is sufficient evidence to charge/convict. Pay them handsomely so they’re willing to take the time to do it. We’d be a lot closer to having impartial juries that way than the way we’re doing it now.

Hymn: It Came Upon the Midnight Clear