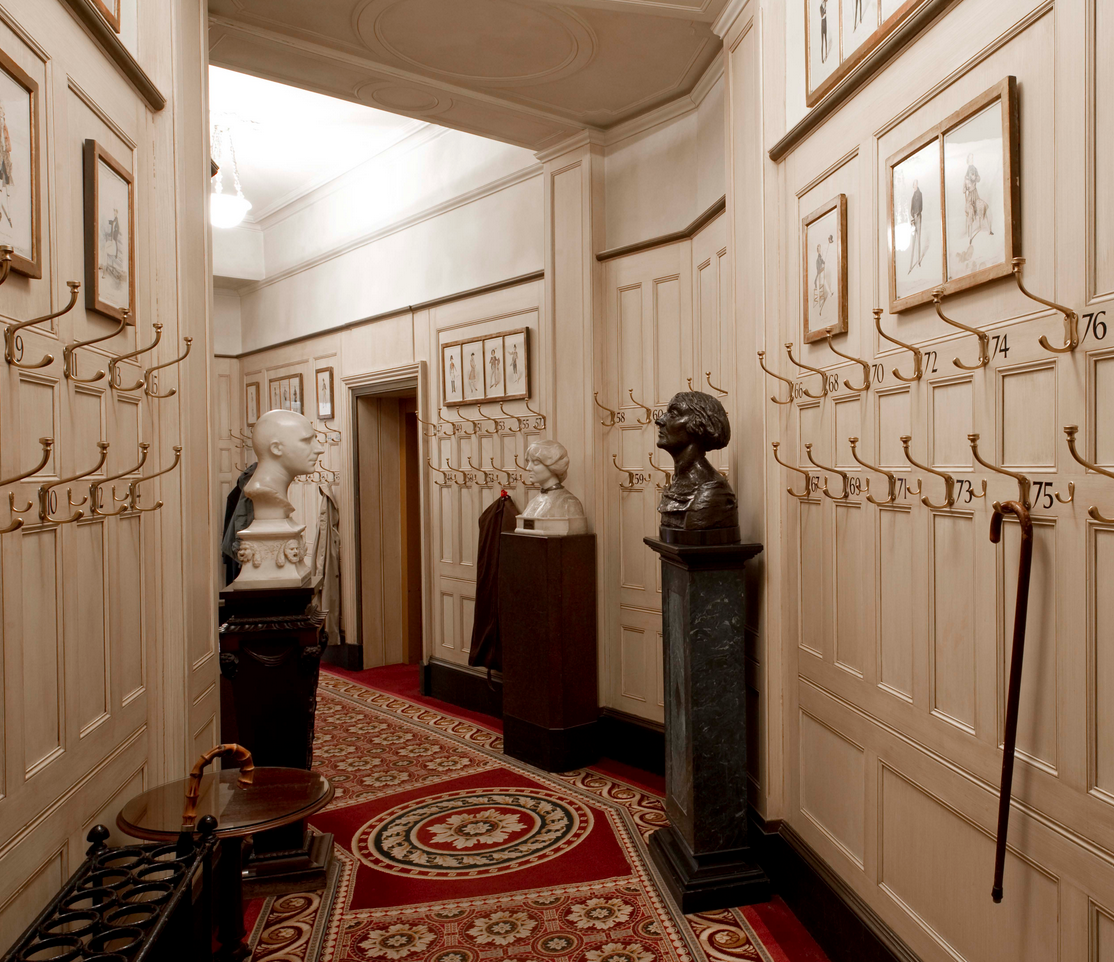 Editor’s note:  The following is extracted from Club Life of London, by John Timbs (published 1866).  All spelling in the original.


The Club, in the general acceptation of the term, may be regarded as one of the earliest offshoots of Man’s habitually gregarious and social inclination; and as an instance of that remarkable influence which, in an early stage of society, the powers of Nature exercise over the fortunes of mankind. It may not be traceable to the time

“When Adam dolve, and Eve span;”

but, it is natural to imagine that concurrent with the force of numbers must have increased the tendency of men to associate for some common object. This may have been the enjoyment of the staple of life; for, our elegant Essayist, writing with ages of experience at his beck, has truly said, “all celebrated Clubs were founded upon eating and drinking, which are points where most men agree, and in which the learned and the illiterate, the dull and the airy, the philosopher and the buffoon, can all of them bear a part.”


For special proof of the antiquity of the practice it may suffice to refer to the polished Athenians, who had, besides their general symposia, friendly meetings, where every one sent his own portion of the feast, bore a proportionate part of the expense, or gave a pledge at a fixed price. A regard for clubbism existed even in Lycurgan Sparta: the public tables consisted generally of fifteen persons each, and all vacancies were filled up by ballot, in which unanimous consent was indispensable for election; and the other laws, as described by Plutarch, differ but slightly from those of modern Clubs. Justus Lipsius mentions a bonâ fide Roman Club, the members of which were bound by certain organized rules and regulations. Cicero records (De Senectute) the pleasure he took in frequenting the meetings of those social parties of his time, termed confraternities, where, according to a good old custom, a president was appointed; and he adds that the principal satisfaction he received from such entertainments, arose much less from the pleasures of the palate than from the opportunity thereby afforded him of enjoying excellent company and conversation.
The cognomen Club claims descent from the Anglo-Saxon; for Skinner derives it from clifian, cleofian (our cleave), from the division of the reckoning among the guests around the table. The word signifies uniting to divide, like clave, including the correlative meanings to adhere and to separate. “In conclusion, Club is evidently, as far as form is concerned, derived from cleave” (to split), but in signification it would seem to be more closely allied to cleave (to adhere). It is not surprising that two verbs, identical in form (in Eng.) and connected in signification, should sometimes coalesce.
To the Friday-street or more properly Bread-street Club, said to have been originated by Sir Walter Raleigh, was long assigned the priority of date in England; but we have an instance of two centuries earlier. In the reign of Henry IV, there was a Club called “La Court de bone Compagnie,” of which the worthy old poet Occleve was a member, and probably Chaucer. In the works of the former are two ballads, written about 1413; one, a congratulation from the brethren to Henry Somer, on his appointment of the Sub-Treasurer of the Exchequer, and who received Chaucer’s pension for him. In the other ballad, Occleve, after dwelling on some of their rules and observances, gives Somer notice that he is expected to be in the chair at their next meeting, and that the “styward” has warned him that he is

That there were certain conditions to be observed by this Society, appears from the latter epistle, which commences with an answer to a letter of remonstrance the “Court” has received from Henry Somer, against some undue extravagance, and a breach of their rules. This Society of four centuries and a half since was evidently a jovial company.
Still, we do not yet find the term “Club.” Mr. Carlyle, in his History of Frederick the Great, assumes that the vow of the Chivalry Orders—Gelübde—in vogue about A.D. 1190, “passed to us in a singularly dwindled condition: Club we now call it.” To this it is objected that the mere resemblance in sound of Gelübde and Club is inconclusive, for the Orders of Templars, Hospitallers, and Prussian Knights, were never called clubs in England; and the origin of the noun need not be sought for beyond its verb to club, when persons joined in paying the cost of the mutual entertainment. Moreover, Klubb in German means the social club; and that word is borrowed from the English, the native word being Zeche, which, from its root and compound, conveys the idea generally of joint expenditure, and specially in drinking.


About the end of the sixteenth or the beginning of the seventeenth century, there was established the famous Club at the Mermaid Tavern, in Bread-street, of which Shakspeare, Beaumont, Fletcher, Raleigh, Selden, Donne, &c., were members. Ben Jonson had a Club, of which he appears to have been the founder, that met at the Devil Tavern, between Middle-Temple gate and Temple Bar.
Not until shortly after this date do we find the word Club. Aubrey says: “We now use the word clubbe for a sodality in a taverne.” In 1659, Aubrey became a member of the Rota, a political Club, which met at the Turk’s Head, in New Palace Yard: “here we had,” says Aubrey, “(very formally) a balloting box, and balloted how things should be carried, by way of Tentamens. The room was every evening as full as it could be crammed.” Of this Rota political Club we shall presently say more. It is worthy of notice that politics were thus early introduced into English Club-life. Dryden, some twenty years after the above date, asks: “What right has any man to meet in factious Clubs to vilify the Government?”
Three years after the Great Fire, in 1669, there was established in the City, the Civil Club, which exists to this day. All the members are citizens, and are proud of their Society, on account of its antiquity, and of its being the only Club which attaches to its staff the reputed office of a chaplain. The members appear to have first clubbed together for the sake of mutual aid and support; but the name of the founder of the Club, and the circumstances of its origin, have unfortunately been lost with its early records. The time at which it was established was one of severe trials, when the Great Plague and the Great Fire had broken up much society, and many old associations; the object and recommendation being, as one of the rules express it, “that members should give preference to each other in their respective callings;” and that “but one person of the same trade or profession should be a member of the Club.” This is the rule of the old middle-class clubs called “One of a Trade.”
The Civil Club met for many years at the Old Ship Tavern, in Water-lane, upon which being taken down, the Club removed to the New Corn Exchange Tavern, in Mark Lane. The records, which are extant, show among former members Parliament men, baronets, and aldermen; the chaplain is the incumbent of St. Olave-by-the-Tower, Hart-street. Two high carved chairs, bearing date 1669, are used by the stewards.
At the time of the Revolution, the Treason Club, as it was commonly called, met at the Rose tavern, in Covent Garden, to consult with Lord Colchester, Mr. Thomas Wharton, Colonel Talmash, Colonel Godfrey, and many others of their party; and it was there resolved that the regiment under Lieutenant-Colonel Langstone’s command should desert entire, as they did, on Sunday, Nov. 1688.
In Friday-street, Cheapside, was held the Wednesday Club, at which, in 1695, certain conferences took place under the direction of William Paterson, which ultimately led to the establishment of the Bank of England. Such is the general belief; but Mr. Saxe Bannister, in his Life of Paterson, p. 93, observes: “It has been a matter of much doubt whether the Bank of England was originally proposed from a Club or Society in the City of London. The Dialogue Conferences of the Wednesday Club, in Friday-street, have been quoted as if first published in 1695. No such publication has been met with of a date before 1706;” and Mr. Bannister states his reasons for supposing it was not preceded by any other book. Still, Paterson wrote the papers entitled the Wednesday Club Conferences.

Club is defined by Dr. Johnson to be “an assembly of good fellows, meeting under certain conditions;” but by Todd, “an association of persons subjected to particular rules.” It is plain that the latter definition is at least not that of a Club, as distinguished from any other kind of association; although it may be more comprehensive than is necessary, to take in all the gatherings that in modern times have assumed the name of Clubs. Johnson’s, however, is the more exact account of the true old English Club.
The golden period of the Clubs was, however, in the time of the Spectator, in whose rich humour their memories are embalmed. “Man,” writes Addison, in No. 9, “is said to be a sociable animal; and as an instance of it we may observe, that we take all occasions and pretences of forming ourselves into those little nocturnal assemblies, which are commonly known by the name of Clubs. When a set of men find themselves agree in any particular, though never so trivial, they establish themselves into a kind of fraternity, and meet once or twice a week, upon the account of such a fantastic resemblance.”
Pall Mall was noted for its tavern Clubs more than two centuries since. “The first time that Pepys mentions Pell Mell,” writes Cunningham, “is under the 26th of July, 1660, where he says ‘We went to Wood’s (our old house for clubbing), ‘and there we spent till ten at night.’ This is not only one of the earliest references to Pall Mall as an inhabited locality, but one of the earliest uses of the word ‘clubbing,’ in its modern signification of a Club, and additionally interesting, seeing that the street still maintains what Johnson would have called its ‘clubbable’ character.”


In Spence’s Anecdotes (Supplemental,) we read: “There was a Club held at the King’s Head, in Pall Mall, that arrogantly called itself ‘The World.’ Lord Stanhope, then (now Lord Chesterfield), Lord Herbert, &c., were members. Epigrams were proposed to be written on the glasses, by each member after dinner; once, when Dr. Young was invited thither, the Doctor would have declined writing, because he had no diamond: Lord Stanhope lent him his, and he wrote immediately—

The first modern Club mansion in Pall Mall was No. 86, opened as a subscription house, called the Albion Hotel. It was originally built for Edward Duke of York, brother of George III, and is now the office of Ordnance, (correspondence.)