The Ardennes campaign was the hardest our soldiers ever had to fight, not because of the intensity of battle, but because of the inclemency of the weather in Europe’s last primeval region. Here, in the Ardennes, wild boar and deer still find sanctuary in the virgin forests from the hunter and the more dangerous adversary armed only with the road engineer’s theodolyte or the merchant’s scales. The snowfall and the freeze that December and January turned the Ardennes into a very still and white landscape, like a strangely unreal photograph. Every soldier who was in the Ardennes will recall the unreality of that coldness, because after a little time riding in a jeep or lying on the ground, not only the limbs but the senses were numbed, and you went about in a coma. This weather and this whole campaign came upon the American army unprepared. The men were not properly clad. They had inadequate clothing for the freezing temperature and dazzling white background against which they fought. Our equipment was not snow-camouflaged, so that the black hulks of our tanks, guns, and trucks could be seen for miles huddled on the snow-covered hills. 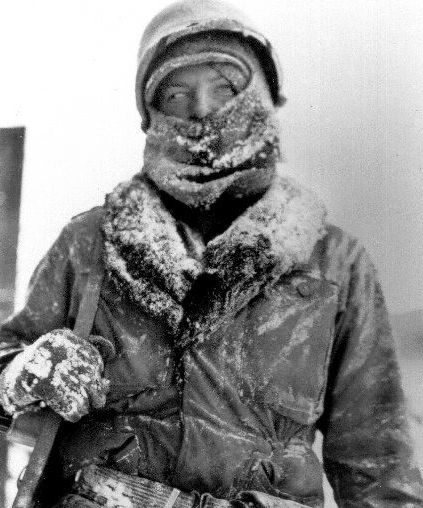 We began to see some strange sights. After men had clad themselves in as many suits of G.I. underwear as they could pull on, they wore anything else they could find to keep warm. Women’s dresses were draped round their shoulders, scarves round their heads. Pixie caps of curious shape and design covered their ears and necks, and only the eyes were visible. Infantrymen made little sapling bowers in their foxholes, chipped from the frozen hillsides with axes. They slept in two’s, in each other’s arms. Since I had to ride four or five hours in an open jeep from the city of Luxembourg to the front fifty miles away, I wore everything I had, and emerged in the morning dressed, from the skin outwards as follows: a layer of woolen underwear, two pair of woolen socks, boots, and cloth snow-overshoes; regulation G.I. uniform, with my dress blouse over the light zipper jacket; over the dress blouse a short leather and fur coat taken from a German Wehrmacht warehouse in Verdun; over the fur jacket my army raincoat, with the wool lining; on my head a wool balaclava helmet, with garrison cap on the top of this; long scarf round my neck. It was difficult to move under this weight of clothing, but one simply wedged one self in the back of a jeep with a similarly clad colleague, and sat there in a half coma until the end of the journey. In the command posts in a farmhouse, where a stove was burning, we discarded some of these clothes by layers. It was always a problem to get at a pencil and paper. 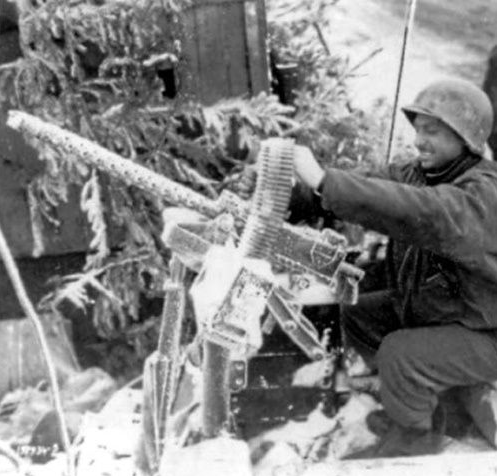 Conditions such as these, which tried the endurance of every man in the army, were a personal challenge to Patton and his creed of physical toughness. As an army commander, he could have directed operations from some warm nook at his headquarters, now situated in Luxembourg city, where the Army staff had moved into the many fine and even luxurious hotels. But now Patton, whose reputation in the Third Army was based on his ubiquity along the Front itself, drove himself beyond the endurance of ordinary men of his age. Every day he sallied forth in his jeep, well-bedecked with stars; and in this open vehicle he sat himself stiffly in the front seat beside his driver, folded his arms across his bemedalled chest, and whizzed along the ice-bound roads, shouting at military policemen to keep the convoys moving, personally challenging guards to discover if they knew the password for the day, inspecting isolated groups of men, stamping into command posts, and studying the course of the battle from forward observation posts. He would return to his headquarters at the end of the day, and walk into the evening briefing, a very tired and old-looking man. The cold was no respecter of Patton’s big stature or harsh voice, and it lined his face with stiff wrinkles, watered his blue eyes, and gripped his vocal cords, so that his voice was as mild as an old woman’s when he spoke to his staff. 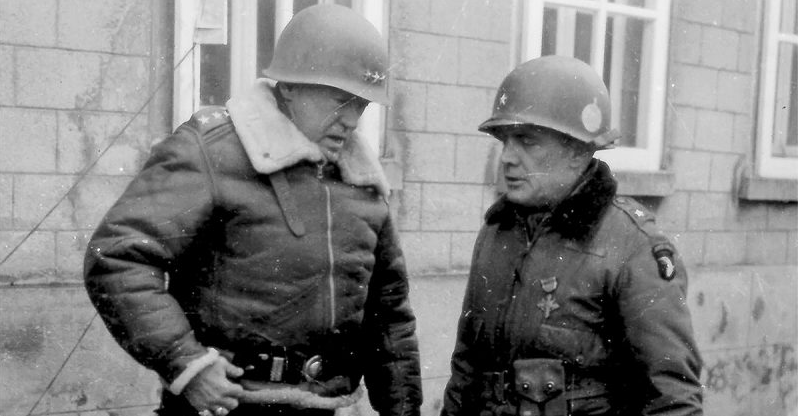 There was a change in General Patton in those days. I believe he was undergoing a religious spell, brought on by the imminent danger to his fellow Americans, the generals who were his personal friends, and the officers and men who had died in great numbers during von Rundstedt’s first onslaught; and who continued to fight and die through Christmastide. That Christmas of 1944 had been the gloomiest any American could have experienced. There were no celebrations; and there was nothing for us to do but fight and wait. It was a time when the longing for home became most acute. I don’t know what Patton did to celebrate the birthday of the Prince of Peace; but most of the time he was in the field, visiting combat units. Everybody went about their daily routine and ate cold storage turkey in the evening for the sake of the tradition. Patton, one supposes, thought of home, as the rest of us did. The lovely, nostalgic music of the carols issuing from the radios affected his quick emotions, and one can visualize this big soldier whose poetic yearnings are so strong, sitting at his desk composing one of those pieces with their confused imagery which so sharply demarcates the dualism of his nature — the man who weeps over one injured soldier and pummels another. 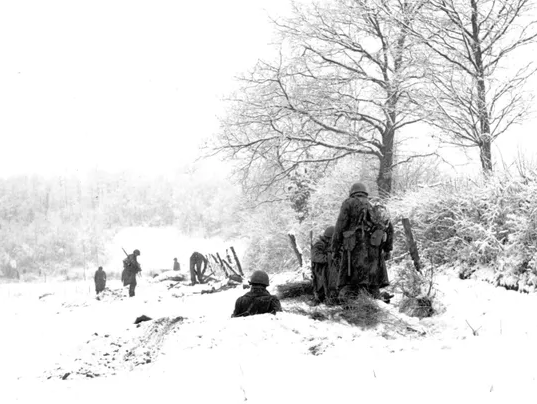 Patton’s seasonal association with the Almighty was typified in what vaguely resembles an Order of the Day to God from General George S. Patton, Jr., Third Army, Commanding. The Order took the conventional form of a Christmas card, which was neatly printed and circulated throughout the entire Army. The tone of this prayer is respectful, as befits a subordinate general addressing the Supreme Commander of the Universe. In it, General Patton is asking for some consideration for his army, as a good commander asks for replacements of men or equipment. But God is no quartermaster, and seldom intervenes in this department of war, concerning himself, as the Old Testament shows, primarily with climatic and geographic matters. Thus, he once parted a river for the Israelites to make a dry crossing; and on another occasion kept the sun in the western heavens long enough to enable a victorious battle to continue until the enemy were annihilated.

Customarily, then, God is only appealed to by warlike men nowadays on matters pertaining to meteorology, and Patton is a traditionalist in this respect. His prayer, it will be noted, is couched in the diplomatic language of a West Pointer, and this is what it says:

“Almighty and most merciful Father, we humbly beseech Thee, of Thy great goodness, to restrain these immoderate rains with which we have had to contend. Grant us fair weather for battle. Graciously hearken to us as soldiers who call upon Thee that, armed with Thy power, we may advance from victory to victory, and crush the oppression and wickedness of our enemies, and establish Thy justice among men and nations. Amen.” 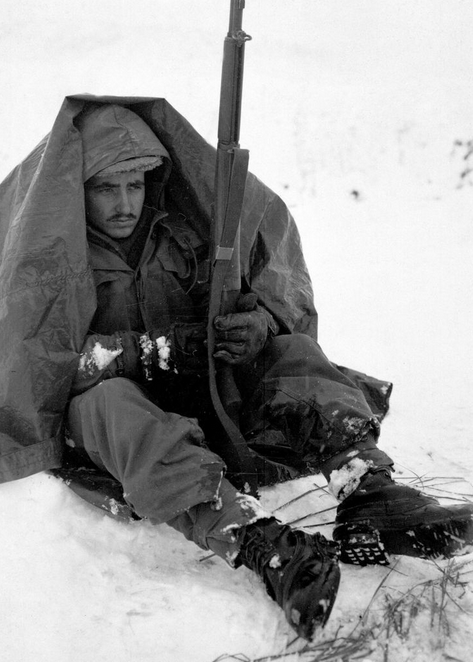 The prayerful Christmas card was received by the half million men of the Third Army without noticeable emotion. To the majority of them, the petitioner and the Petitioned were both vague and remote personalities who somehow governed their immediate destinies from high places to which they had no access. Those destinies were now being lived out in fields and woods in a foreign land; and it was natural that the weary rifleman, crouched in his hole, should see and think only as far as the next range of hills or the next forested slope to which he had to advance on the morrow.

The rains did stop soon after the printing and distribution of Patton’s request. Who of us can say whether the General’s prayer was answered, or whether some unknown soldier’s praying much more silently in his water-soaked slit trench was the one who was heard; or whether the prayers of millions of anxious wives and mothers made the rains to stop; or whether they discontinued in the cause of justice among men and nations; or whether a cold front moved down from the Arctic and changed the weather from wet and warm to dry and cold?

The rains did stop. And Patton was able to re-deploy his army. Our fighters and bombers took off from airfields near and distant. And after several weeks the High Command was able to report that the situation in the Ardennes was restored.

We Were Never Asked

"The Meaning of the Crusade" by G. K. Chesterton

More than any other foreign nation, the relationship of the United States to Israel dominates our

In my 14th livestream I talk about the political realignment that is occurring before our eyes,

Everything Old is New Again

Who is Really Behind Free Meds for Covid-19? Editor’s Note: A new friend, Gustavus Adolphus, has

A modern phenomena this crowd will be familiar with is Cancel Culture. This is when a