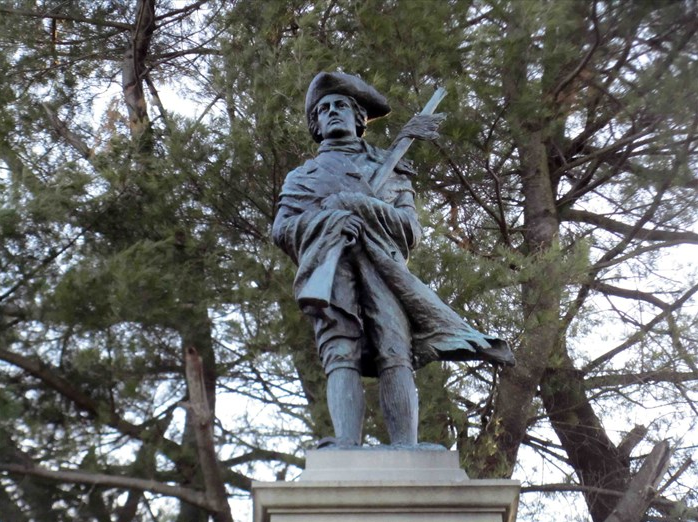 Editor’s note:  The following is extracted from The World’s Greatest Military Spies and Secret Service Agents, by George Barton (published 1917).

This is the story of how a private soldier in the New Jersey Brigade displayed remarkable shrewdness and unusual courage, and participated in the glory of one of the most successful campaigns of the Revolutionary War by acting as the agent of General Lafayette in entering the British lines, and obtaining valuable information concerning the movements of Cornwallis.
It is quite possible that other private soldiers of the Continental army may have performed exploits just as thrilling in their nature, but Charles Morgan had the good fortune to be the man of the hour, and the fact that he secured precisely the information that was desired at one of the critical stages of the Revolution stamps him as a man of more than ordinary intelligence and resourcefulness. Nothing succeeds like success, and Morgan succeeded far beyond his most sanguine expectations.
General Lafayette had reached a point in his campaign where he desired to obtain accurate information regarding the resources and intentions of the enemy. He had been worrying Cornwallis for several weeks and in the summer of 1781 the British commander reached Virginia after vainly pursuing the French general and destroying millions of dollars’ worth of property. Eventually he reached Yorktown, on a narrow peninsula at the mouth of the York River. He had no desire to go to this place, but did so because there was nothing else to do under the circumstances. During his chase of Lafayette he boastingly said: “The boy cannot escape me,” but to his amazement the youngster with a larger army had turned around and begun to chase him. It was then that Cornwallis had retreated to Yorktown in order to get help by sea from New York. There he began the work of fortifying himself, little dreaming that he was placing himself in a trap from which it would be almost impossible to escape. While he was waiting for the soldiers to arrive from New York a French fleet of warships under Count de Grasse was coming to block him. This was the great opportunity of the Continental army to strike a blow that might be heard around the world. Washington’s plan, and it was concurred in by Lafayette, was to march rapidly south from the Hudson to Yorktown, and, with the help of the French fleet on one side and Lafayette and his army on the other, to capture Cornwallis with his whole force. Needless to say, a movement of this character required an immense sum of money for provisions, pay and powder. In this crisis Robert Morris, patriot and Philadelphia financier, came to the rescue and furnished nearly $1,500,000 for the work of putting the patriot army in the proper condition.


Lafayette disposed his forces with great military ability, but there were some points in the proposed plan of campaign which were not quite clear to his mind. He was anxious to procure exact information of the strength of the forces under Cornwallis, and if possible to learn the exact nature of that general’s plan of campaign. He looked about him for some courageous and intelligent man who could obtain the information he desired. His choice fell upon Charles Morgan, a member of the New Jersey Brigade, who had attracted his attention by bravery in battle. He sent for Morgan and told him that he considered him a proper agent for the accomplishment of his purpose and proposed that he should enter the British camp in the character of a deserter, but in reality a spy.
The soldier was delighted at the thought of being selected for such a hazardous enterprise. Lafayette at that time was in all the glory of his young manhood. To Morgan he was the very embodiment of romance. He had looked upon him for months with wonder and delight. He was to him the bright particular hero of the Revolution. That a man should give up family, friends and fortune, and all of the prospects of a great career, should leave his own country to go to a foreign shore for the purpose of casting his lot with the struggling colonists, made him sublimely heroic. The courtly airs of the young nobleman also captivated the imagination of the New Jersey soldier. Morgan, before entering the army, had been a farmer. He was sturdy and wholesome, yet without the benefits of an education, and the French general dazzled him with his simplicity of manner no less than by his natural assumption of authority. He could scarcely believe his ears when he was told that he was to act as the confidential agent of the General in such an important enterprise.
“This mission,” said Lafayette, “is a dangerous one. It may cost you your life. Under the circumstances I am not willing to order you to do what I desire. If you go to the camp of Cornwallis it must be a voluntary act, and with the full understanding of its possible consequences.”
“I am perfectly willing,” was the prompt reply, “and am glad to serve you and my country.”
The Marquis beamed upon him with satisfaction in his countenance. He spoke to him in a fatherly manner and added:
“Now, if there is any assistance you require from me, either with money or men, do not hesitate to ask for it.”
Morgan shook his head.
“None at all. I am glad to take the risk, but I would not like to do this work unless my motives are perfectly understood. I only ask one thing and that is that if I should be detected and executed you will cause a notice to be inserted in the New Jersey papers saying that I was acting under the orders of my commanding officer.”
The required condition was readily accepted by the General, who then proceeded to explain just what he wished to ascertain.
That night Morgan entered the British lines in the guise of a deserter, and was warmly welcomed by the English soldiers. The officer who first met him looked at Morgan with some curiosity, and said:
“Why did you leave the rebels? Were you afraid that they were about to be defeated?”
Morgan protested warmly that he had no such thought in his mind.
“I have been with the American army from the beginning of the war,” he said, “and I went into the contest with all my heart and soul. While I served with General Washington I was perfectly satisfied and I would have gone until the end, but when they put me under the charge of a Frenchman I felt that it was time to call a halt. I was unwilling to fight under a foreigner. I did not like it, I chafed under it, and finally I made up my mind to desert, and here I am.”

With this story, which was given with an air of the greatest plausibility, the British were satisfied. They received the supposed deserter without suspicion and assigned him to duty as a soldier in one of the English regiments. But before going on actual duty the young man was taken to Cornwallis and his story repeated. The British general was attired in all the glory of his high office and the members of his staff presented a glittering array of gold lace. Morgan could not help but contrast their prosperous appearance with the shabby and threadbare condition of the American army. Cornwallis was an imposing looking man who evidently was filled with the importance of his rank. He spoke harshly enough to his officers, but assumed a kindly manner with the deserter from the American ranks.
“How many men has Lafayette under his command?” he asked.
Morgan gave a quick reply, giving the number at much less than the actual force under the French general.
“How long will it take the Marquis to cross the James River?” asked Cornwallis.
“Three hours, my lord,” was the answer.
“Three hours,” exclaimed Cornwallis. “Don’t you think it is more likely to take three days?”
“Not at all, my lord,” was the response. “The Marquis has a certain number of boats, and each boat will carry a certain number of men, and if your Lordship will take the trouble of calculating you can find that he can cross the stream in about three hours.”
Cornwallis turned to his officers and began speaking in an undertone to them. There was much discussion and a great deal of shaking of heads, and finally the Earl said in the hearing of Morgan:
“The scheme will not do. We will have to change some of the lines.” 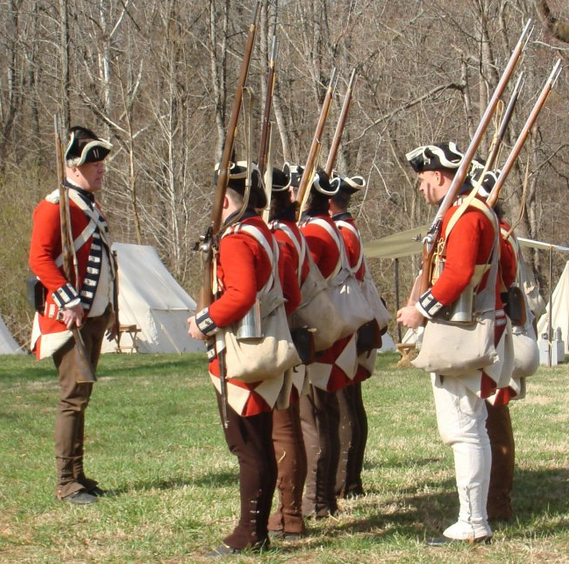 After that Morgan was assigned to his position with one of the English regiments. He was a hale fellow well met, and it did not take him long to win their confidence. The circumstances under which he had come to the British army gave him considerable latitude and he was able to go and come pretty much as he pleased. He talked freely with the officers and they, in turn, regarding him as a zealous convert to their cause, did not hesitate to furnish him with the kind of information which he most desired. Once or twice after that he was called before Cornwallis and cross-questioned concerning the plans of the American army. He stood this ordeal with amazing self-possession, and by his native shrewdness managed to obtain much more information than he gave, the difference being that his news was the product of his imagination, while the information he obtained was accurate and clearly outlined the movement of the forces under Cornwallis. 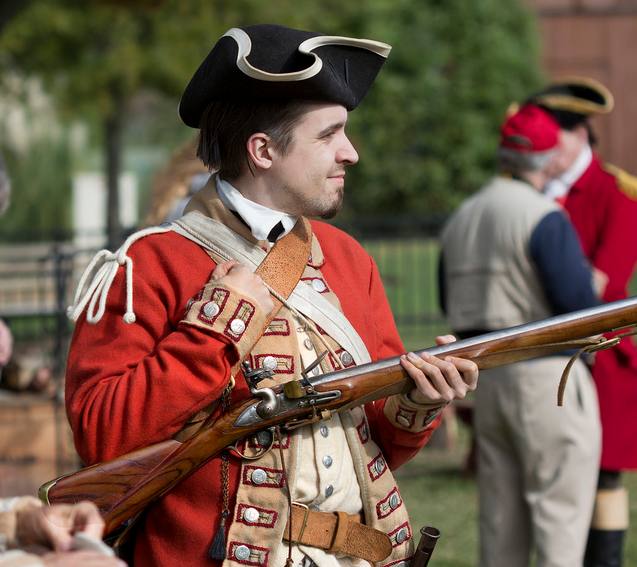 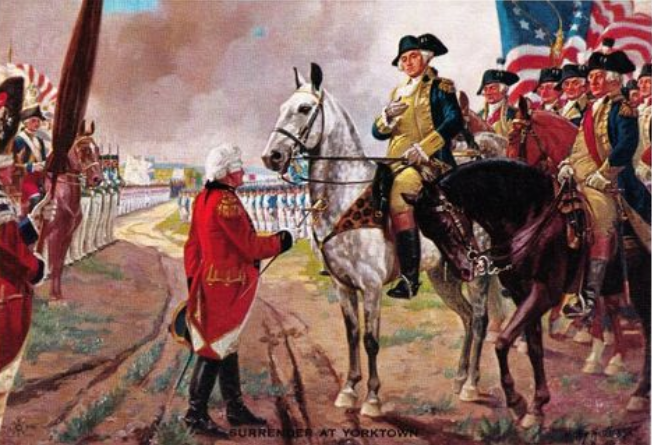 The fall of Yorktown practically ended the war of the Revolution. Washington had conquered. Lafayette’s confidence in the struggling colonists was fully vindicated and his great respect for George Washington increased. As has been said, it was the victory of a great and good man in a great and good cause.
The news of the surrender was sent post-haste to London. The excited messenger who announced the sad tidings to Lord North, the Prime Minister of the British Government, afterwards said that that functionary threw up his arms as though he had received a shot and cried dramatically:
“It is all over!”
And so it was; and in the victory at Yorktown none of the Continental troops fought more bravely or showed to greater advantage than those who served under the leadership of Lafayette. Among the privates in the New Jersey Brigade none fought with greater courage than Charles Morgan, who had served as the personal spy of the great Frenchman in the camp of Cornwallis. But in his case virtue and courage had to be their own reward. Many of the soldiers who deserved great honor were compelled to go unrewarded, and Charles Morgan was apparently one of these, for after his exploit, and the ending of the war, his name does not appear in any of the records of that great event. Like many other deserving men, he was lost in the mists of obscurity.
Share this

Sermon: The Beauty And Blessing Of Forgiveness