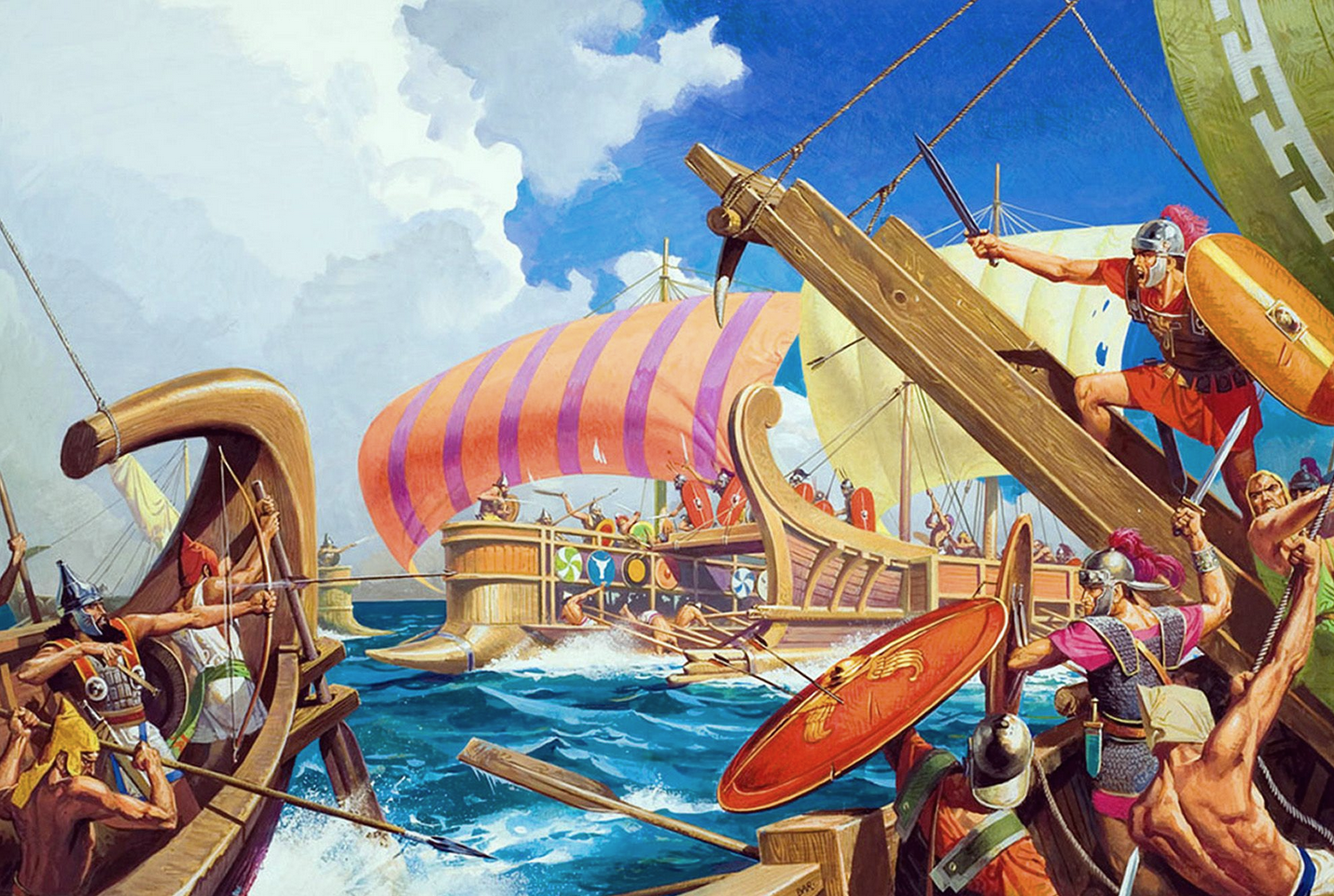 Editor’s note:  The following is extracted from Stories of Courage and Heroism, edited by William Patten (published 1918).


The first wars that the Romans engaged in beyond the bounds of Italy, were with the Carthaginians.
The first dispute between Rome and Carthage was about their possession in the island of Sicily; and the war thus begun had lasted eight years, when it was resolved to send an army to fight the Carthaginians on their own shores. The army and fleet were placed under the command of the two consuls, Lucius Manlius and Marcus Attilius Regulus. On the way, there was a great sea-fight with the Carthaginian fleet, and this was the first naval battle that the Romans ever gained. It made the way to Africa free; but the soldiers, who had never been so far from home before, murmured, for they expected to meet not only human enemies, but monstrous serpents, lions, elephants, asses with horns, and dog-headed monsters, to have a scorching sun overhead, and a noisome marsh under their feet. However, Regulus sternly put a stop to all murmurs, by making it known that disaffection would be punished by death, and the army safely landed, and set up a fortification at Clypea, and plundered the whole country round. Orders here came from Rome that Manlius should return thither, but that Regulus should remain to carry on the war. This was a great grief to him. He was a very poor man, with nothing of his own but a little farm of seven acres, and the person whom he had employed to cultivate it had died in his absence; a hired laborer had undertaken the care of it, but had been unfaithful, and had run away with his tools and his cattle, so that he was afraid that, unless he could return quickly, his wife and children would starve. However, the Senate engaged to provide for his family, and he remained, making expeditions into the country round, in the course of which the Romans really did fall in with a serpent, as monstrous as their imagination had depicted. It was said to be 120 feet long, and dwelt upon the banks of the river Bagrada, where it used to devour the Roman soldiers as they went to fetch water. It had such tough scales that they were obliged to attack it with their engines meant for battering city walls; and only succeeded with much difficulty in destroying it. 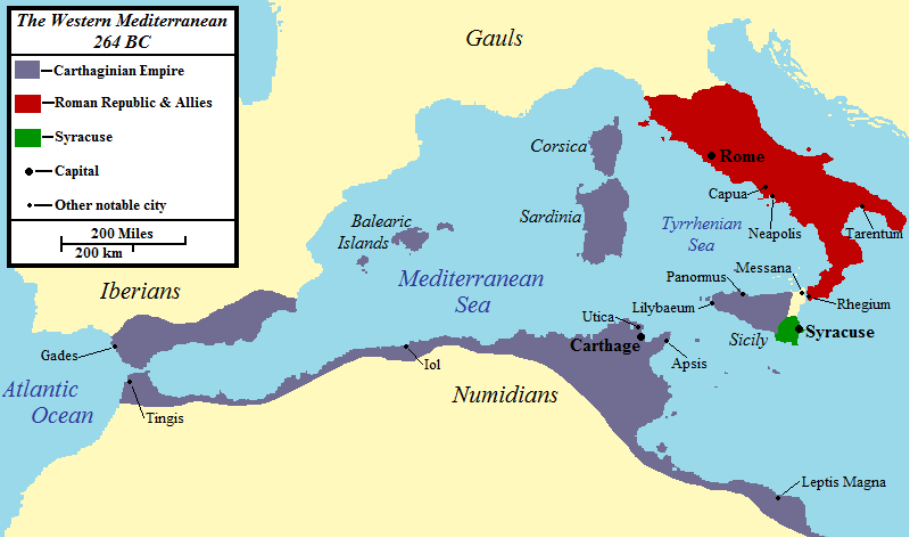 The country was most beautiful, covered with fertile corn-fields and full of rich fruit-trees, and all the rich Carthaginians had country-houses and gardens, which were made delicious with fountains, trees, land flowers. The Roman soldiers, plain, hardy, fierce, and pitiless, did, it must be feared, cruel damage among these peaceful scenes; they boasted of having sacked 300 villages, and mercy was not yet known to them. The Carthaginian army, though strong in horsemen and in elephants, kept upon the hills and did nothing to save the country, and the wild desert tribes of Numidians came rushing in to plunder what the Romans had left. The Carthaginians sent to offer terms of peace; but Regulus, who had become uplifted by his conquests, made such demands that the messengers remonstrated. He answered, “Men who are good for anything should either conquer or submit to their betters;” and he sent them rudely away, like a stern old Roman as he was.
His merit was that he had no more mercy on himself than on others. 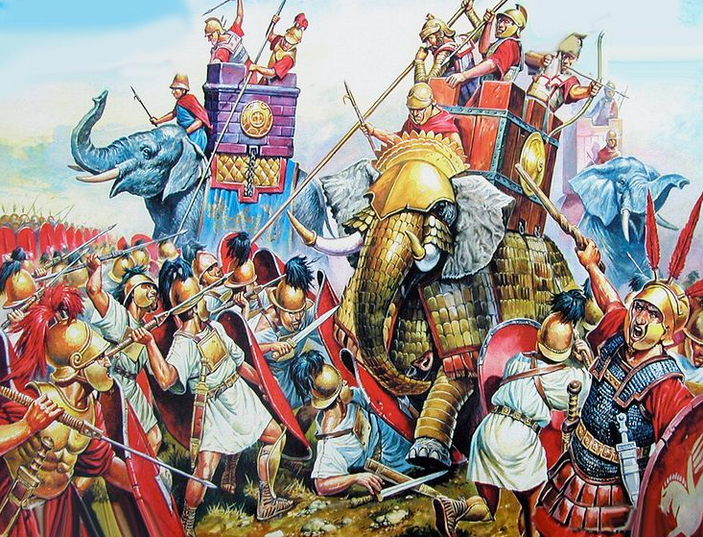 The Carthaginians were driven to extremity, and made horrible offerings to Moloch, giving the little children of the noblest families to be dropped into the fire between the brazen hands of his statue, and grown-up people of the noblest families rushed in of their own accord, hoping thus to propitiate their gods, and obtain safety for their country. Their time was not yet fully come, and a respite was granted to them. They had sent, in their distress, to hire soldiers in Greece, and among these came a Spartan, named Xanthippus, who at once took the command, and led the army out to battle, with a long line of elephants ranged in front of them, and with clouds of horsemen hovering on the wings, The Romans had not yet learnt the best mode of fighting with elephants, namely, to leave lanes in their columns where these huge beasts might advance harmlessly; instead of which, the ranks were thrust and trampled down by the creatures’ bulk, and they suffered a terrible defeat; Regulus himself was seized by the horsemen, and dragged into Carthage, where the victors feasted and rejoiced through half the night, and testified their thanks to Moloch by offering in his fires the bravest of their captives.
Regulus himself was not, however, one of these victims. He was kept a close prisoner for two years, pining and sickening in his loneliness, while in the meantime the war continued, and at last a victory so decisive was gained by the Romans, that the people of Carthage were discouraged, and resolved to ask terms of peace. They thought that no one would be so readily listened to at Rome as Regulus, and they therefore sent him there with their envoys, having first made him swear that he would come back to his prison if there should neither be peace nor an exchange of prisoners. They little knew how much more a true-hearted Roman cared for his city than for himself—for his word than for his life.
Worn and dejected, the captive warrior came to the outside of the gates of his own city, and there paused, refusing to enter. “I am no longer a Roman citizen,” he said; “I am but the barbarians’ slave, and the Senate may not give audience to strangers within the walls.”
His wife Marcia ran out to greet him, with his two sons, but he did not look up, and received their caresses as one beneath their notice, as a mere slave, and he continued, in spite of all entreaty, to remain outside the city, and would not even go to the little farm he had loved so well.
The Roman Senate, as he would not come in to them, came out to hold their meeting in the Campagna.
The ambassadors spoke first, then Regulus, standing up, said, as one repeating a task, “Conscript fathers, being a slave to the Carthaginians, I come on the part of my masters to treat with you concerning peace, and an exchange of prisoners.” He then turned to go away with the ambassadors, as a stranger might not be present at the deliberations of the Senate. His old friends pressed him to stay and give his opinion as a senator who had twice been consul; but he refused to degrade that dignity by claiming it, slave as he was. But, at the command of his Carthaginian masters, he remained, though not taking his seat.
Then he spoke. He told the senators to persevere in the war. He said he had seen the distress of Carthage, and that a peace would be only to her advantage, not to that of Rome, and therefore he strongly advised that the war should continue. Then, as to the exchange of prisoners, the Carthaginian generals, who were in the hands of the Romans, were in full health and strength, whilst he himself was too much broken down to be fit for service again, and indeed he believed that his enemies had given him a slow poison, and that he could not live long. Thus he insisted that no exchange of prisoners should be made.
It was wonderful, even to Romans, to hear a man thus pleading against himself, and their chief priest came forward, and declared that, as his oath had been wrested from him by force, he was not bound by it to return to his captivity. But Regulus was too noble to listen to this for a moment. “Have you resolved to dishonor me?” he said. “I am not ignorant that death and the extremest tortures are preparing for me; but what are these to the shame of an infamous action, or the wounds of a guilty mind? Slave as I am to Carthage, I have still the spirit of a Roman. I have sworn to return. It is my duty to go; let the gods take care of the rest.” 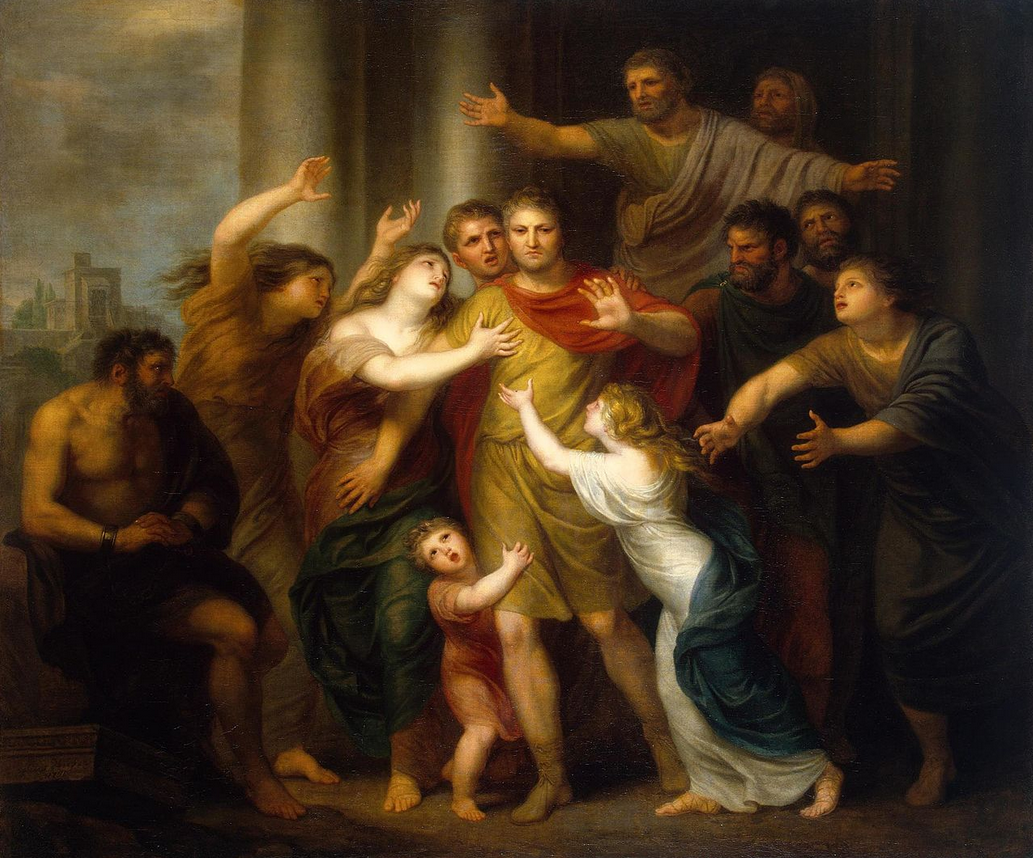 The Senate decided to follow the advice of Regulus, though they bitterly regretted his sacrifice. His wife wept and entreated in vain that they would detain him; they could merely repeat their permission to him to remain; but nothing could prevail with him to break his word, and he turned back to the chains and death he expected as calmly as if he had been returning to his home. This was in the year B.C. 249.
“Let the gods take care of the rest,” said the Roman; the gods whom alone he knew, and through whom he ignorantly worshiped the true God, whose Light was shining out even in this heathen’s truth and constancy. How his trust was fulfilled is not known. The Senate, after the next victory, gave two Carthaginian generals to his wife and sons to hold as pledges for his good treatment; but when tidings arrived that Regulus was dead, Marcia began to treat them both with savage cruelty, though one of them assured her that he had been careful to have her husband well used. Horrible stories were told that Regulus had been put out in the sun with his eyelids cut off, rolled down a hill in a barrel with spikes, killed by being constantly kept awake, or else crucified. Marcia seems to have heard, and perhaps believed in these horrors, and avenged them on her unhappy captives till one had died, and the Senate sent for her sons and severely reprimanded them. They declared it was their mother’s doing, not theirs, and thenceforth were careful of the comfort of the remaining prisoner. 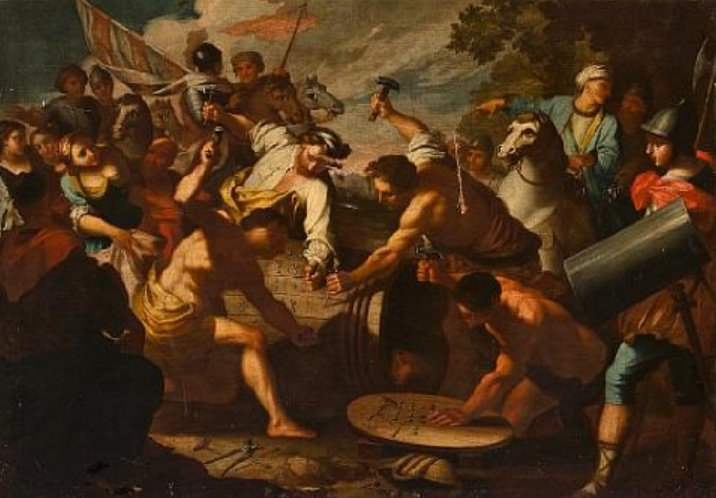 It may thus be hoped that the frightful tale of Regulus’ sufferings was but formed by report acting on the fancy of a vindictive woman, and that Regulus was permitted to die in peace of the disease brought on far more probably by the climate and imprisonment, than by the poison to which he ascribed it. It is not the tortures he may have endured that make him one of the noblest characters of history, but the resolution that would neither let him save himself at the risk of his country’s prosperity, nor forfeit the word that he had pledged.

"The Song of Seven Cities" by Rudyard Kipling