John McCain’s funeral was this past weekend.  In a truly disgusting spectacle, it turned into a Trump Bashing Event.  After a week of being lectured of how one must respect McCain’s service to this country and how he loved the country above all, his funeral was, in true McCain style, an opportunity to stab conservatives in the back one last time from beyond the grave.
In death, he was the same pathetic petty little man that he was in life.
And in this event, we see where people’s true colors lie.  Donald Trump was explicitly not invited.  Which is not surprising considering that 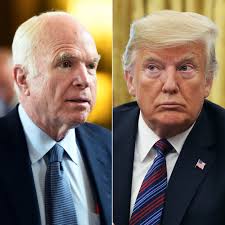 Trump has made it a point in every speech to take a dig at McCain for his vote to keep Obamacare.  We are told that McCain was a statesman for selling out Americans who empowered the Republicans on 6 years of promises to rid us of Obamacare.  One man took his promise seriously.  One man betrayed the people who put their faith in him.  But Trump is the bad guy and McCain is the hero.
We are told that Donald Trump’s marital infidelity and his treatment of women make him a horrible person.  However, McCain’s own marital indiscretions are not any better. But yet again, Trump is the bad guy.
So, what’s the difference?  John McCain is a globalist.  Trump is a nationalist.  Look at who McCain had singing his praises.  Barack Obama and Joe Biden.  This is just another case of the media trying to shove a narrative down our throats rather than simply reporting the news.  Our self-appointed betters continue to think that their job is to lead us down the “right” path of history rather than to simply do the job of a journalist and report the facts.  And all they have managed to do is underline that John McCain was on the side of the globalists and that Donald Trump is on the side of America.