Editor’s Note: Our buddy, Adam Piggott, the Gentleman Adventurer, shares another post with us. He focuses on his own nation in Australia, but that is part of Western Culture, so is relevant to those of us in the Northern Hemisphere, as well.

Whenever I write an article on race I’ll always get someone who will respond with a comment like this one:

What if the migrant is more K selective, more embracing of free market and free speech, and more conscientious than locals?

That comment was left on Facebook by someone with the surname of Li. It seems that some of the interlopers, or at least those who possess half a brain and a modicum of situational awareness, are looking around at Australia’s out of control diversity with a growing sense of unease. As well they should. Implicit in this objection is the argument that the invader is of a better quality than the original inhabitant, thereby rendering the takeover and subversion of the original nation and its people acceptable due to the superiority of the incoming replacements.

It is of course an entirely racist viewpoint, but the prevailing wisdom of the last 50 years has been the lie that only white people are capable of being racist. The left have based their entire existence on this deceit, and as The Z Man points out it was the great sin of conservatives to abandon the acceptance of the human condition for one that attempted to do away with the hierarchical and tribal reality of humans. 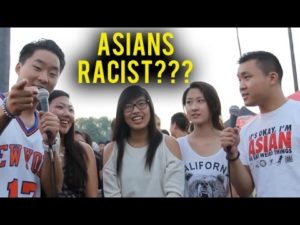 cortex. But people, white people at least, don’t like to consider this reality because of the fact that it makes them so uncomfortable. Whites are so conditioned by the prog left lies of race that even the idea of thinking of an observation along these lines is enough to send most good whites into paroxysms of despair at their obvious inherent racism.

But as any Asian can tell you, racism is a good thing. Racism has allowed Japan to stay entirely Japanese. Racism has done the same for China, as well as every other country in the region. The Indian government is in the process of expelling 4 million people of Bangladeshi origin, many of whom originally came to India in 1971 as well as a great many born in India. It matters not to the Indians as they have proven to be incompatible with the host nation and thus their time is up.

Do you think that there might be some conscientious K selective free market and free speech embracers in that enormous number of people? Most probably, but out the door they are in the process of going. The Indian government understands that for India to survive and prosper in the region then it has to remain inherently Indian.

Our own succession of Australian governments over the past 50 years have completely discarded this reality and instead set about on a course to replace the native white population of British origin with a worldwide hodgepodge of whomever they could get and whomever would cough up the university money to get in the back door. That Australia is held up in Europe as some sort of bastion of the defense of borders is quite possibly the most ridiculous and laughable idea since New Coke. Sure we stopped a couple of thousand from coming in the naughty way, but at the same time we have been importing a quarter of a million a year, the vast majority from India and China, and some think that the real figure is up to three times that amount on an annual basis.

It’s not unusual for the viewpoint in the quoted comment to be expressed by a native Australian. In fact, I would say that the vast majority of the time this is the case. The idea is that if the new arrivals are harder working than the “bad whites” then they should be let in and human instinct should be allowed to take its course. By human instinct what the native Australian hopes for is for the lower class white trash of Australia to disappear, replaced by their hardworking Asian betters. Implicit in this is the fact that the new arrivals will still be on a social level several rungs lower than the original acceptable whites.

Tensions in Australia between the different classes are historical and go back to convict times. Australia required hard men to conquer its terrible landscape, but the inconvenience for the city dwellers was that those hard men tend to sire children. In its most basic form this was a clash between the English and the Irish, with the Scots placed somewhere uncomfortably in the middle. The hope was that a need for hard men would die out, but two world wars and a mining boom and bust cycle that has lasted over a hundred years put paid to that hope.

Which is why Australian conservatives were so quick to jump on the theory of the bad racist whites. The lower class yobbos that the upper classes had to put up with could be replaced by the new arrivals. The fact that the new arrivals tended to compete directly for the lower class jobs and businesses was all part of the grand design. This attitude is reflected in the USA with the disdain that the chattering classes holds for those living in what is termed ‘flyover country’. Hillary Clinton labelled them as deplorables, which was only a step too far because of what it finally awakened. Those attitudes have not disappeared; if anything they have only grown stronger. Politico’s Marc Caputo recently mocked attendees of a Trump rally as ‘toothless garbage people.’

Class war has been a feature of Australia and the USA since their foundations, a fact that is only now becoming readily apparent since for most of their history these two nations have held themselves aloof and apart from Great Britain in this respect.

What the upper classes didn’t count on was the ferocious nationalism and tribalism that is implicit in many of these imported populations. New arrivals to Australia in the 1950s and 60s made a conscious effort to integrate as well as they could because they had no choice in the matter since they were vastly outnumbered by the native population. But today with that no longer the case every granddaughter of an immigrant is proudly declaring her allegiance to whatever nation her people originally came from.

In other words, the idea was to replace the bad whites with compliant servant races which would do the jobs that the bad whites previously did and that the good whites think are beneath them. What wasn’t anticipated is that the invitational populations would eventually band together in their respective tribal groups and begin the process of attempting to take over. This had not been considered because of the concurrent belief in the lie that people other than whites not only cannot be racist but they will not align themselves along tribal lines.

The lie regarding racism was adopted as an attempt to convince themselves that there would be no consequences for the mass importation of foreigners for them; for the good whites.

This steaming pot of races and inter-tribal factions has been unwittingly set up over the past 50 years for an eventual implosion along racial and tribal lines that could well make the Rwanda massacres look like an African picnic. The Li’s of the world are the unfortunate ones who will be caught in the middle. No amount of K selection superiority is going to help you when the good whites and the bad whites get down to finishing a long and dirty business.

Video: The Power Of Hope

The Globalists Show Their Colors