Editor’s note:  The following is extracted from Tales of Wonder, by Lord Dunsany (published 1916). All spelling in the original.

In an ill-lit ancient tavern that I know, are many tales of the sea; but not without the wine of Gorgondy, that I had of a private bargain from the gnomes, was the tale laid bare for which I had waited of an evening for the greater part of a year.

I knew my man and listened to his stories, sitting amid the bluster of his oaths; I plied him with rum and whiskey and mixed drinks, but there never came the tale for which I sought, and as a last resort I went to the Huthneth Mountains and bargained there all night with the chiefs of the gnomes.

When I came to the ancient tavern and entered the low-roofed room, bringing the hoard of the gnomes in a bottle of hammered iron, my man had not yet arrived. The sailors laughed at my old iron bottle, but I sat down and waited; had I opened it then they would have wept and sung. I was well content to wait, for I knew my man had the story, and it was such a one as had profoundly stirred the incredulity of the faithless.

He entered and greeted me, and sat down and called for brandy. He was a hard man to turn from his purpose, and, uncorking my iron bottle, I sought to dissuade him from brandy for fear that when the brandy bit his throat he should refuse to leave it for any other wine. He lifted his head and said deep and dreadful things of any man that should dare to speak against brandy.

I swore that I said nothing against brandy but added that it was often given to children, while Gorgondy was only drunk by men of such depravity that they had abandoned sin because all the usual vices had come to seem genteel. When he asked if Gorgondy was a bad wine to drink I said that it was so bad that if a man sipped it that was the one touch that made damnation certain. Then he asked me what I had in the iron bottle, and I said it was Gorgondy; and then he shouted for the largest tumbler in that ill-lit ancient tavern, and stood up and shook his fist at me when it came, and swore, and told me to fill it with the wine that I got on that bitter night from the treasure house of the gnomes.

As he drank it he told me that he had met men who had spoken against wine, and that they had mentioned Heaven; and therefore he would not go there—no, not he; and that once he had sent one of them to Hell, but when he got there he would turn him out, and he had no use for milksops.

Over the second tumbler he was thoughtful, but still he said no word of the tale he knew, until I feared that it would never be heard. But when the third glass of that terrific wine had burned its way down his gullet, and vindicated the wickedness of the gnomes, his reticence withered like a leaf in the fire, and he bellowed out the secret.

I had long known that there is in ships a will or way of their own, and had even suspected that when sailors die or abandon their ships at sea, a derelict, being left to her own devices, may seek her own ends; but I had never dreamed by night, or fancied during the day, that the ships had a god that they worshipped, or that they secretly slipped away to a temple in the sea.

Over the fourth glass of the wine that the gnomes so sinfully brew but have kept so wisely from man, until the bargain that I had with their elders all through that autumn night, the sailor told me the story. I do not tell it as he told it to me because of the oaths that were in it; nor is it from delicacy that I refrain from writing these oaths verbatim, but merely because the horror they caused in me at the time troubles me still whenever I put them on paper, and I continue to shudder until I have blotted them out. Therefore, I tell the story in my own words, which, if they possess a certain decency that was not in the mouth of that sailor, unfortunately do not smack, as his did, of rum and blood and the sea.

You would take a ship to be a dead thing like a table, as dead as bits of iron and canvas and wood. That is because you always live on shore, and have never seen the sea, and drink milk. Milk is a more accursed drink than water.

There is only one moment in the history of ships, that carry crews on board, when they act by their own free will. This moment comes when all the crew are drunk. As the last man falls drunk on to the deck, the ship is free of man, and immediately slips away. She slips away at once on a new course and is never one yard out in a hundred miles.

It was like this one night with the Sea-Fancy. Bill Smiles was there himself, and can vouch for it. Bill Smiles has never told this tale before for fear that anyone should call him a liar. Nobody dislikes being hung as much as Bill Smiles would, but he won’t be called a liar. I tell the tale as I heard it, relevancies and irrelevancies, though in my more decent words; and as I made no doubts of the truth of it then, I hardly like to now; others can please themselves.

It is not often that the whole of a crew is drunk. The crew of the Sea-Fancy was no drunkener than others. It happened like this.

The captain was always drunk. One day a fancy he had that some spiders were plotting against him, or a sudden bleeding he had from both his ears, made him think that drinking might be bad for his health. Next day he signed the pledge. He was sober all that morning and all the afternoon, but at evening he saw a sailor drinking a glass of beer, and a fit of madness seized him, and he said things that seemed bad to Bill Smiles. And next morning he made all of them take the pledge.

For two days nobody had a drop to drink, unless you count water, and on the third morning the captain was quite drunk. It stood to reason they all had a glass or two then, except the man at the wheel; and towards evening the man at the wheel could bear it no longer, and seems to have had his glass like all the rest, for the ship’s course wobbled a bit and made a circle or two. Then all of a sudden she went off south by east under full canvas till midnight, and never altered her course. And at midnight she came to the wide wet courts of the Temple in the Sea. 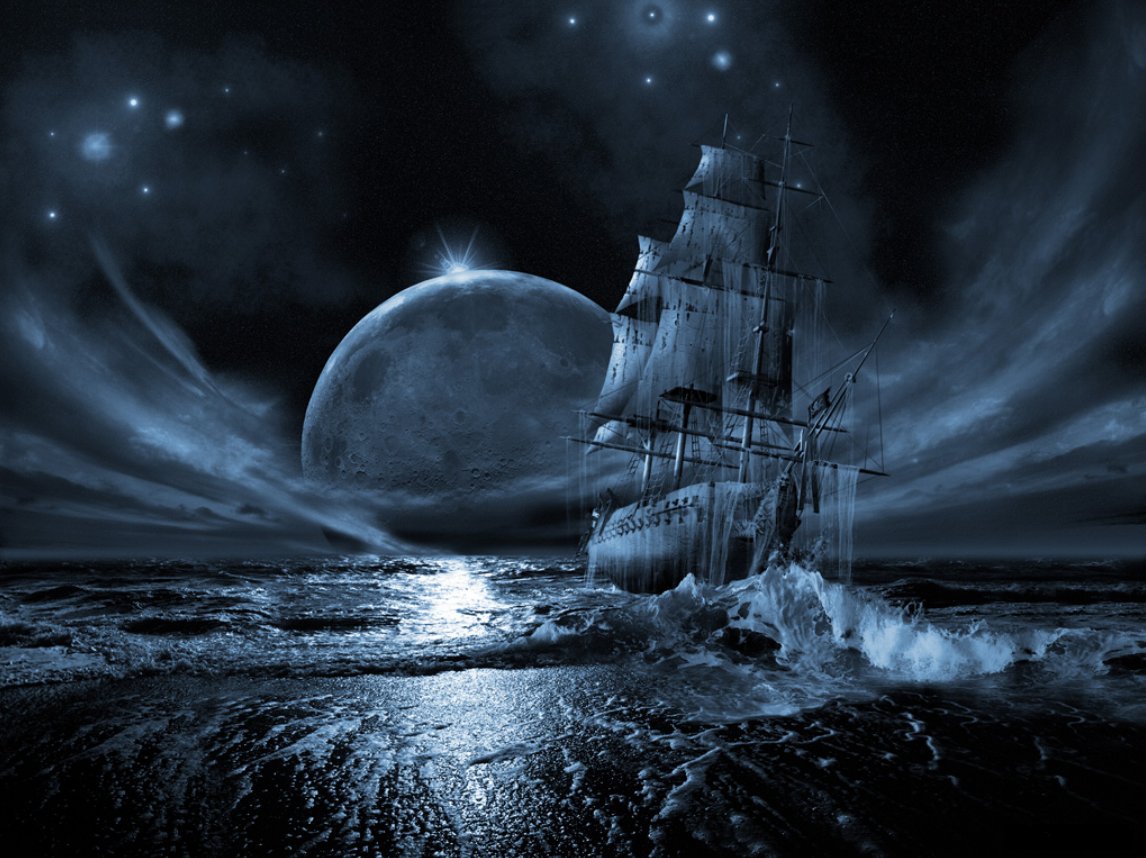 Midnight and moonlight and the Temple in the Sea Bill Smiles clearly remembers, and all the derelicts in the world were there, the old abandoned ships. The figureheads were nodding to themselves and blinking at the image. The image was a woman of white marble on a pedestal in the outer court of the Temple of the Sea: she was clearly the love of all the man-deserted ships, or the goddess to whom they prayed their heathen prayers. And as Bill Smiles was watching them, the lips of the figureheads moved; they all began to pray. But all at once their lips were closed with a snap when they saw that there were men on the Sea-Fancy. They all came crowding up and nodded and nodded and nodded to see if all were drunk, and that’s when they made their mistake about old Bill Smiles, although he couldn’t move. They would have given up the treasuries of the gulfs sooner than let men hear the prayers they said or guess their love for the goddess. It is the intimate secret of the sea. 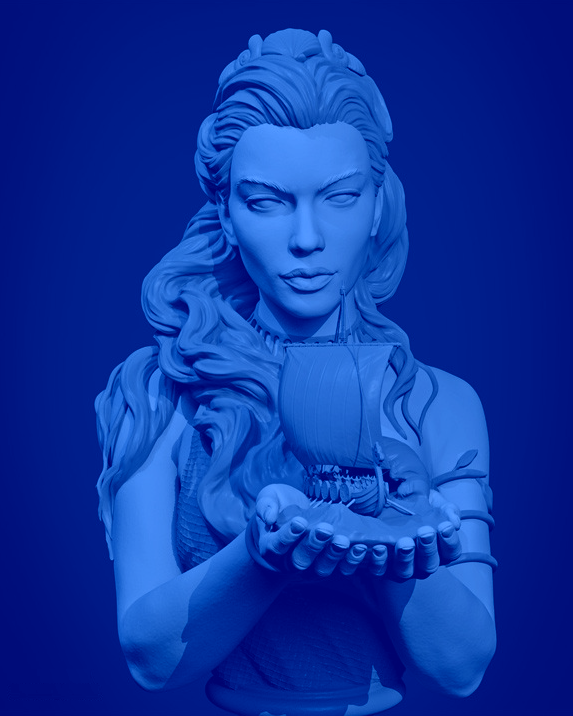 The sailor paused. And, in my eagerness to hear what lyrical or blasphemous thing those figureheads prayed by moonlight at midnight in the sea to the woman of marble who was a goddess to ships, I pressed on the sailor more of my Gorgondy wine that the gnomes so wickedly brew.

I should never have done it; but there he was sitting silent while the secret was almost mine. He took it moodily and drank a glass; and with the other glasses that he had had he fell a prey to the villainy of the gnomes who brew this unbridled wine to no good end. His body leaned forward slowly, then fell on to the table, his face being sideways and full of a wicked smile, and, saying very clearly the one word, “Hell,” he became silent for ever with the secret he had from the sea.