On Monday, we kicked off a discussion on Student Loan Debt.  Lets continue by looking at how we untangle the knot.  As I see it, we have a couple of options.

Let’s look at each of these three options. 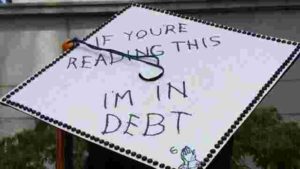 Option number one is the libertarian way to handle it. The problem is that the political left is already wise to this.  You think that the “no bankruptcy” clause got into Obamacare by accident?  Oh no.  Just as they planned for Obamacare to ultimately fail and usher in “single payer”, they planned for the education bubble to burst, and for all of those poor young people to not just need a government bail out, but to be demanding the government take over the financial sector that did this to them!  They were predatory lenders and they have profited mightily from loans we can’t afford and can never discharge!  This is the move that most of the folks on the right would make.  Don’t meddle in the economy, because meddling to solve a problem caused by meddling will only make the problem worse.  And normally I would agree, and before you libertarians sperg out make sure to read option three.
Option number two, to simply bail them out, does nothing to resolve the problem.  This is clearly what the Obamacare No Bankruptcy clause is intended to ultimately culminate in.  Right now, student loan debt stands at more than a trillion dollars.  That number is only going to continue to grow.  Ultimately, it will become a number that the government will say is “too big to fail”.  And there will be a nationalization of this, bringing the long sought after government control of the financial sector.  This endgame is something that we have to avoid at all costs.
Option Three, head off the problem and restructure the debt is what we really have to do.  This can be as simple as the promised repeal of Obamacare, which would permit young folks who got in over their heads to declare bankruptcy and reorganize their debt under the law to something that they could manage.  It could be coupled with legislation guaranteeing that the lenders will not lose money as long as they agree to a restructuring of the loans to stop the interest from compounding.  We might even take the money we were otherwise going to give as grants to colleges and universities and instead set it aside for dealing with this problem.  After all, the universities themselves are not guiltless in this problem.  Their feeding frenzy at the Federal Trough is a large part of it!   Ultimately, we are going to have to start shutting off the spigot of federal funds to these universities no matter what we do.  The market has been artificially expanded, and the contraction is going to be painful for the universities to weather.  And if the universities are really intellectually honest, they knew that the federal gravy train was going to have to stop at some point.  Many of them have overbuilt, expecting enrollment to grow indefinitely.  As the Austrians would say, we have a very serious misallocation of resources.
Unfortunately, there isn’t a silver bullet that solves this problem.  But the federal government created this bubble.  And if we don’t start to deflate it, and fast, it’s going to pop and the results are going to be more disastrous than the 2008 financial crisis.  The difference will be that while in 2008 it was a bunch of nameless, faceless bankers who stood to lose everything if we didn’t bail them out, in the near future, it will be sons, daughters, nieces, and nephews who are hamstrung by this.  And just like a hurricane, this thing has the capacity of merging with other fiscal storms and becoming even more of a nightmare.

100 Years Ago Today, We Were A Nation