Allow us, if we may, to posit a word of caution to Team Trump. Oh, don’t get us wrong – it is a fine sunny day here in NationalistLand, but if you look close there is a storm cloud just over on the horizon, over near 2020. You may think Trump already has this all locked up. But we disagree. In fact, we believe there is one big issue that Trump will either adopt for his own and ride to victory… or he will be run over by it like so much road kill.
That issue is Student Loan Debt. 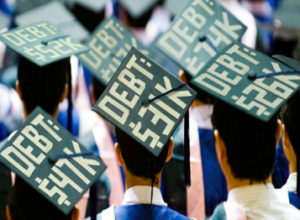 Back in 1995, for you old timers who remember, Bill Clinton was politically dead. He was a zombie. The Assault Weapons Ban was a disaster, and the reaction to it would gut the democratic majority of Congress and hand huge majorities to the GOP. But Clinton himself survived. He survived by adopting the most popular positions his opponents were running on.  The liberal Democrat ran on, of all things, Welfare Reform? What?
That is exactly what Trump needs to do with the Student Loan Debt issue. Right now, today, Trump should challenge the House of Representatives to draw up a bill that would forgive student loan debt. In that one move, Trump would destroy any hope the Left has in 2020. It would rip the DNC Coalition apart, tearing the Millennials away in droves. It would drive a wedge between the educated whites who love them some Democrats and the DNC, because Trump would be waving giant wads of cash in their faces.
This is a critical issue for 2020. Don’t think so? As a nobody, Bernie Sanders took this issue up. Hillary beat him, but today? Today Hillary is selling herself for cash, and Bernie is busy writing the party’s platform. Hillary won the battle. Bernie won the war. Crazy socialist Democrats are getting elected on this issue.
Now, no doubt you’re ready to call us left wing commies. That’s fine. But over the next several weeks, we are going to prove that not only is this the best thing for Trump to do as a candidate, we’re going to show that it is in fact the correct Nationalist position, and well as the correct economic position.
Buckle up, boys. The next few weeks are gonna be a little wild around here.

The Changing College Student And Debt