Virtue signalling is the conspicuous expression of moral values by an individual done primarily with the intent of enhancing that person’s standing within a social group. The term was first used in signalling theory, to describe any behavior that could be used to signal virtue – especially piety among the political or religious faithful. Since 2015, the term has become more commonly used as a pejorative characterization by commentators to criticize what they regard as the platitudinous, empty, or superficial support of certain political views, and also used within groups to criticize their own members for valuing outward appearance over substantive action.
From Infogalactic:  The Planetary Knowledge Core 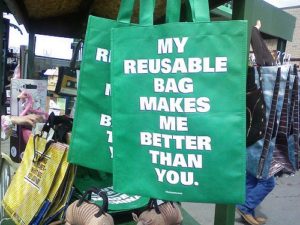 The modern phenomenon of Virtue Signalling has gotten entirely out of control.  A disaster happens, and people change their Facebook avatars to show that they care.  Trump refuses to lump folks who went to the Charlottesville rally because they opposed tearing down statues with white supremacists and people are jumping all over themselves to denounce him (for the twentieth or thirtieth time).   But, I think I have finally found the piece de  resistance of Virtue Signaling.  But, before we take a look, click the link on the Infogalactic Article, so we can be sure that we know what to look for!
Ladies and Gentlemen, I give you:  Thoughts on Confederate Statues from a Southern White Male
Do go read the whole thing.  I’m only going to excerpt the parts that I find interesting.

Growing up in the South, I was told (and unfortunately believed) a number of things about the Confederacy. Of course, I heard the common Southern sentiment that the Civil War was about states’ rights and definitely not slavery, but I was also told that the Confederate generals were upstanding and honorable men, while the Union generals consisted of morally corrupt misfits. I was told that many Southern slaveowners treated their slaves well (aside from the whole “forcing them to be slaves” part, I guess). I even heard that the Northern, non-slave-holding states were just as racist and oppressive as the South (maybe even more so).

The fact that none of this was true didn’t matter. This wasn’t about truth, but rather about instilling and propagating a racist ideology. It’s important to note that this mentality was not limited to extremist groups such as the KKK. This way of thinking permeated the community I grew up in, and I knew no one in the KKK. My teachers, friends, and even some relatives believed this. It was “normal.”

In the opening paragraph, we have The Othering.  He was born IN THE SOUTH, so he knows that all Southerners are RACISTS.  That’s right, the people who he grew up with, his friends, his family.  All irredeemable racists.  They weren’t members of the Klan, but make no mistake – THEY ARE ALL KLANSMEN IN THEIR HEARTS!

Yet, in the previous paragraph to this one, it is pointed out that most of the statues were erected in between 1895 and World War I.  Confederate Veterans were still alive, and these statues were erected by their children, and grandchildren.  The statues honor men who stood up for what they believed in.  A point that is about to be very clumsily made.

If these monuments were about history, we would see statues of slaves being whipped by their owners, black families being torn apart as they were sold to different places, and plantation owners with their black slave mistresses and children. If this was about history and not white supremacy, we’d see a statue of an innocent black man hanging from a tree and a group of happy white people posing for a picture with his lifeless body.

The fact that Southerners didn’t produce art that glorified slavery should actually tell you a lot.  Humans produce art based on things that they are proud of.  The South is filled with Confederate statues, not because of some malevolent attempt to “whitewash” history, but because Southerners felt a need to honor the men who had fallen in a war that stole hundreds of thousands of sons of the South.  And likewise, there aren’t statues of slaves or lynched black men, because Southerners didn’t find it something of beauty or honor.   But likewise, we also need to take an aside to discuss what makes something historically significant.  We have a number of statues of the Greek and Roman gods filling our museums.  They are a part of history.  Should we likewise toss them away because nobody believes that Zeus is going to smite you with a lightning bolt?  Or that Cupid’s little arrows help you to fall in love, and this is not an accurate representation of history?  I think the question answers itself, and that answer is no.  The statues tell us what people of the past thought was important and wanted future generations to remember them by.

On one hand, I agree that dismantling a statue of a Confederate soldier won’t do much to directly combat the racist undercurrent that still runs deep throughout our nation.

But, these statues are symbolic of a mindset that has been tearing at the fabric of America for generations, and bringing them down is at least symbolic of us collectively rejecting that mindset. When we remove a Confederate memorial from a public site, we are saying that it is time to remove the veiled hate that put it there in the first place. I think the time is well overdue.

And there we have it.  The H Word.  Hate.  Only Hatred could drive somebody to build a statue.  Nobody ever puts up a statue out of love, honor, or respect.  How about the Iwo Jima Memorial in Washington DC – is it a monument to hatred of the Japanese – we put them in internment camps you know, dropped atom bombs on them, too.   Maybe it should come down?

Here’s the bottom line.  Southerners have a unique culture, and don’t care whether anybody else likes it or not.  That’s inconvenient for the globalists, so what makes the South unique has to be destroyed.  And that objective is being actively aided and abetted by this virtue signaling pablum that ignores the real issues.  Those Confederate memorials are metal and stone.  They aren’t hurting anybody.  But black people are hurting, while the people who are so frequently accused of racism are not the ones hurting blacks.  But that… is a topic for another day.

The Trashing of Robert E. Lee