In my previous post, I noted that the terms Racist and Racism are getting thrown around so much that they have have lost their meaning.  We have entire groups of people being labeled as racist simply for not falling all over themselves to declare themselves horrible people for the sins of their ancestors.  As I pointed out last time, none of this does anything to help blacks in America – in fact, it causes whites to be resentful because they are being maligned for things that they themselves have never done.  You might say that Southerners have been… racially profiled.
Here are things that I think we can do that will genuinely help. 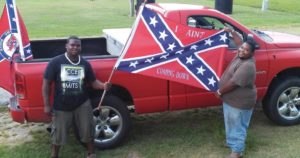 The moral of the story is, it’s time to stop treating blacks as a “disadvantaged minority” and start treating them like our neighbors.   We don’t know what it’s like to be black.  But they don’t know what it’s like to be white.  As the old saying goes, the grass is always greener on the other side.  Everybody has troubles.  Treat people as equitably as you possibly can.  Let the Church do its job and try to help the less fortunate.  Let the Churches band together.  But not buying into the political lefts ideas of “social justice” and identity politics doesn’t make you a racist.
When everything is racist… then nothing is.

Why Would I Bother?

Hymn: Rejoice In The Lord