On July 25, 2019 Snopes attempted to fact check the Babylon Bee… again.  You may recall a while back that Snopes fact checked the Bee’s article about CNN buying industrial washing machines to spin their news stories in as false, which caused Facebook to automatically start to kick them off the platform.  While it was quickly resolved, since the Bee is clearly satire, it left an ominous feeling behind.

This time around, though, Snopes didn’t just “fact check” a satirical story.  They attempted to label the Bee as “Fake News” (which has become a moving target basically meaning anything that the political left doesn’t like).  The Bee has retained legal council.  And we wish them well, because if they manage to label the Babylon Bee fake news, they’ll soon be coming after us all.  There’s a fine line between satire and the opinions and commentary we run on this site. 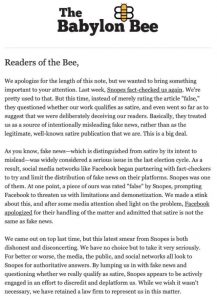 Adam Ford, the founder of the Babylon Bee, laid out his concerns over what Snopes did on Twitter.  And he’s absolutely right about them.

But, if you thought that was bad, it gets even worse.  CNN’s Brian Stelter (formerly of the New York Times) took to twitter to label the Bee as “Fake News”.  This is yet another example of the bias of the mainstream news and CNN in particular.  Not that anybody with eyes needs that pointed out at this point.  But it has become clear that while the Bee started off as just a fun site that we enjoyed visiting to laugh with, they have become a threat.  And they’re clearly being set up for a take down.

We are seeing some of the walls of political correctness start to fall.  And that’s good.  You have to have the unpleasant conversations in life.  If you want to be free, you have to have an absolute commitment to the truth.  And sometimes, the truth really hurts.  But an unpleasant truth is better than a sweet lie – because dealing with the truth makes you a stronger better person.

We live in an age where  a failure to affirm somebody’s lifestyle choices is considered hateful.  The Truth is that if you love somebody, you will let them know when they’re making a mistake.  The Babylon Bee has become a vital resource, because they poke fun at us when we get too full of ourselves.  You have to be able to laugh at yourself.  What the Bee is doing is one of the gentlest ways to correct society when it’s gone off track.  And we can’t afford to lose that.