We are not here to call for restricted immigration policies, though, if those are proposed, we will certain support them.  Anything that moves the ball our way we accept.  It needs to be stated that mere immigration reform is not our end goal.  Our end goal is deportation on a mass scale.   That is one of the primary differences between the Hard Right and mere conservatives.   Conservatives are fine with the current direction of things; they just want it to move a little slower.   We are here to reverse the course completely. 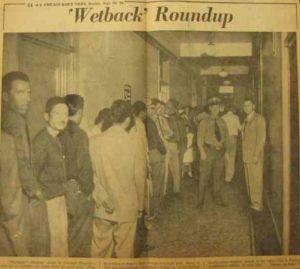 Conservatives are primarily interested in virtue signaling about illegal immigration, while they make sure their housekeeper Maria doesn’t have any problems and their businesses have access to cheap off-the-books illegal labor.  The Hard Right is interested in doing what is best for America and Americans.
Our position is not hard to grasp.  America is not an idea.  America is a people.
You have to go home now.
How then shall we accomplish this goal?  It’s not a hard thing, to be honest.  The conventional method works pretty well.  During the first year alone of Operation Wetback, the United States deported over 1 million Mexicans.  From May to July, 170,000 apprehensions were made.  It is reported that over 500,000 Mexicans fled the US voluntarily, and that’s just from Texas.
Mass deportation not only can be done, it has been done.
There is another, more artful way, however.   There are very real penalties for violating immigration laws of other countries.  Only the US is forgiving enough to simply deport the criminals home without penalty.  It is time for that to change.
The US should apply minimum sentencing for those entering the US illegally, or those here illegally already.   If these criminals faced jail time, their decision process would look quite different.  The self-deportations would dwarf Operation Wetback.  But again.. even this is only the start.  After we see what is left after the self-deportations slow, then we will have to determine how much forced deportation will be required of those who came here legally. But again, they all have to go back.

Video: The Death Of Materialism

We Stand With The Babylon Bee