Hey everyone, I’m not exactly new to Men of the West; they’ve kindly shared my poetry, and we’ll have an exciting announcement for another project pretty soon. But this is my first dedicated piece for their site. Now, if the excessive use of the self-referential personal pronoun bothers you, I was born in 1984. Some sociologists would put me on the tail-end of GenX, but I deny this and shall bear my Millennial cross of woe.

I shared this meme to my Facebook, and it got a decent response: 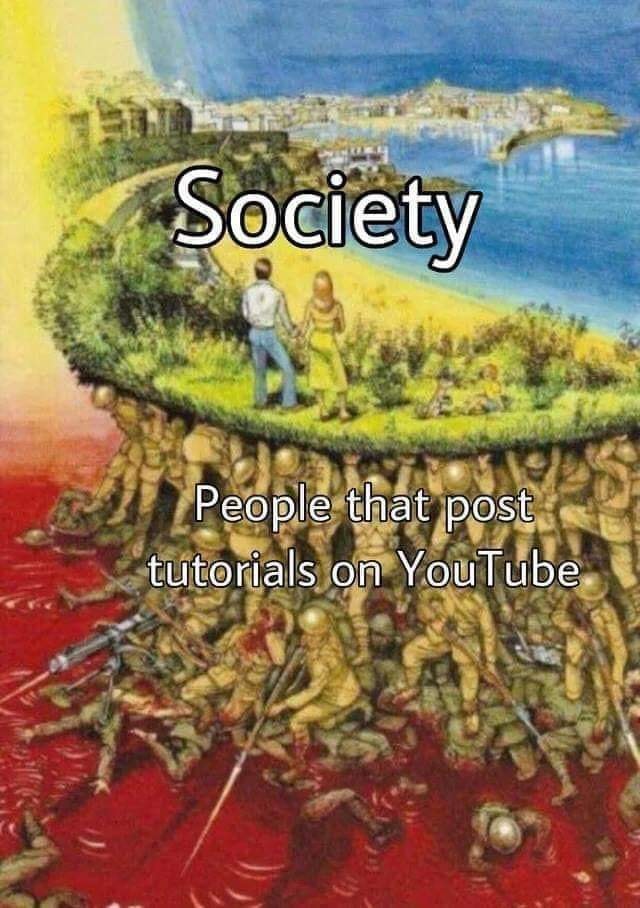 I grew up in the rural South. I was homeschooled. And I had people who cared enough to teach me about practical things while allowing me to indulge in my impractical, theoretical intellectualism. So I have always believed in the Heinleinian theory of “The Competent Man”:

“A human being should be able to change a diaper, plan an invasion, butcher a hog, conn a ship, design a building, write a sonnet, balance accounts, build a wall, set a bone, comfort the dying, take orders, give orders, cooperate, act alone, solve equations, analyse a new problem, pitch manure, program a computer, cook a tasty meal, fight efficiently, die gallantly. Specialization is for insects.” Robert A. Heinlein, Time Enough For Love

There is ongoing debate on the helplessness of Millennials, and while this stereotype is mostly valid, we’ve grown up in an entirely fucked up culture that is absolutely no fun at all whatsoever for any of us who are even homeopathically sane. Rather than bitch at my cogenerationalists, I’d rather see us improve, even on the margins, in any way we can. GenX won’t live forever, after all, and you’re the last ones who remember anything even remotely unfucked– well, we in the Rural South had a few extra years, but we can split hairs later.
One thing you can’t say about Millennials is that we are unwilling to learn if someone is willing to teach. And that brings us to YouTube tutorials. YouTube tutorials are an art form, and are a staple of the Millennial media diet. Now, whether or not Millennials follow them, I don’t know; I’m not a researcher and I took enough statistics to think they’re mostly bunk, but I know that I do follow tutorials.
A couple years ago, in winter, one of the pipes in my house (some of us own houses) cracked because I forgot to leave the water dripping one night. That was a mistake. So the next morning as I was making coffee, I heard a hissing sound from the laundry room. I walked in to find a mess. After the initial moment of mild panic and rage, I threw on a jacket, went outside to my garage, grabbed my trusty meter-key, and proceeded to the meter-box. Why did I have a meter key? The man who did the inspection for the mortgage company told me that it was the first thing I should buy. It’s the first thing you should, too. So I shut off the water from the mains.
Well, that sounds better than it is, it wasn’t quite that simple. The ground outside was frozen, and the cutoff valve was covered in mud since we’ve switched over to the newfangled electronic ones. I had to dig around with my gardening gloves and a spade to free the cutoff valve. That was an exciting morning. So now every autumn, I inspect my meter box and clean it out and ensure that the cutoff valve is visible.
Now, I knew the basics of plumbing because I watched my dad do some repairs around the house a few times when I was growing up, but I didn’t know exactly what I needed. I knew I needed the correct pipe diameter, and because the previous plumber had done kind of a shitty job, I had to work off a poor design. I already had a good pipe-cutter because one of my cogenerationalists and I had spent an evening making PVC didgeridoos once — yes, America, Millennials are weird. I had wrenches that would get the job done because tools remain popular gifts in the South. But even so, the tools and supplies necessary, if I hadn’t already had them, would have cost less than $50.
After I mopped up the water, I wanted to make sure I did the job right. So I looked up some videos. I can’t remember the man’s name, but there was a cantankerous plumber from the Midwest who clearly enjoyed what he did enough to make videos about doing it right (while cussing out the last plumber who’d done the work). He showed how to splice in the pipe correctly, the best kind of cement to use on the fittings, and how to do the job well. In ten minutes, I knew exactly what I needed to buy. So after my coffee, I drove over to the big-box hardware store, and within ten more minutes had everything I needed.
I returned home, found the video again on my phone and kept it handy just in case I forgot a step. But I didn’t. I got the job done. The repair held and I did a better job than the last guy. I figure I saved about $100, and after the initial stress of “oh shit, there’s a burst pipe,” it was fun.
What’s the point?

Do you have a skill? Are you capable of being entertaining? Maybe you should share that with the world. Make a video. Some random Midwestern dude saved me some money, informed me, and entertained me through what would otherwise have been a stressful experience. I can’t recall his name, but I’m grateful. Others have, too, but that was automotive repair. And electrical work and…
Point is, you have things to teach. You probably should.

"The Monarchs of the Andes" by James Orton

Friday Music: A Fistful of Dollars