“Abraham saw My day…”
In the book of John (8:56), we read that Jesus was speaking to a group of people at the Temple, and He said to them, “Your father Abraham earnestly desired to see My day; and he saw, and was 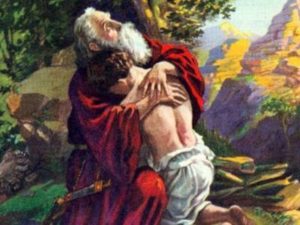 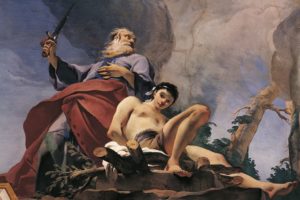 In character with Abraham being an honest, faithful servant of the Truth, we cannot believe that Abraham would intentionally deceive his son into going to his death, unwilling and terrified. In addition, a man of his age would not be difficult to overcome by someone in the prime of his life, fighting to remain alive, as would be Isaac’s natural instinct.
Interestingly, the Hebrew of the Torah states that Abraham “split (divided – bakah) the wood/trees” for the offering.  (In the Bible, the Hebrew word eitz usually translated by English translators as “wood” literally means, “tree”.) The unusual use of the plural, atzei leads the rabbis to conclude that there were two trees used in the wood preparation, in prophetic anticipation of Temple service which God would introduce one day, in which it was possible for the one bringing the sacrifice to bring at least “two pieces of wood” for their offering in addition to the animal which was being sacrificed.
Certainly, the Holy One (blessed be He) did not include anything superfluous in the text, so the mentioning of the splitting of the trees was deliberate and purposeful. Whether we can say it was from two sources or it consisted of two pieces of wood will be a matter of debate for others.
“AND HE CLEAVED THE TREES FOR THE BURNT-OFFERING. R. Hiyya b. R. Jose said in the name of R. Miasha, and it was also repeated in the name of R. Bannaiah: as a reward for the two cleavings with which our father Abraham cleaved the trees of the elevation-offering, he earned that God should cleave the Sea [into two] before his descendants, as it says, ‘And the waters were divided’ (Ex. 14:21)” – [Soncino – ‘Trees’ is in the plural, whence it is deduced that he cut up two logs”] – Genesis Rabbah 55:8
Temptations in the Wilderness
Their destination was Moriah, the future home of the Temple in Jerusalem, the Place where sacrifices would reconcile the Jewish people with their God, the mountain upon which Jesus would also be crucified. It was a three day journey and there was much to consider and to talk about.
According to one midrash, Abraham and Isaac each were tested separately as they traveled on the road toward Moriah.  While this midrashic story possibly was not meant to be taken literally, we can draw a distinct parallel between this “teaching parable” and the literal accounts of the Gospels. According to this legend, they were each tempted as they traveled through the wilderness by none other than ha satan (“the adversary”).

“And while Abraham and Isaac were proceeding along the road, Satan came and appeared to Abraham in the figure of a very aged man, humble and of contrite spirit, and said to him: “Are you silly or foolish, that you go to do this thing to your only son? God gave you a son in your latter days, in your old age, and will you go and slaughter him who did not commit any violence, and will you cause the soul of your only son to perish from the earth? Do you not know and understand that this thing cannot be from the Lord? For the Lord would not do unto man such evil, to command him, go and slaughter your son.” Abraham, hearing these words, knew that it was Satan, who endeavored to turn him astray from the way of the Lord, and he rebuked him so that he went away…”
Having failed to tempt Abraham, Satan proceeds to try to sway Isaac from his willing, resolute decision.  “…And Satan returned and came to Isaac, and he appeared unto him in the figure of a young man, handsome and well-favored, saying unto him: “Do you not know that your silly old father brings you to the slaughter this day for nothing?
Now, my son, do not listen to him, for he is a silly old man, and let not your precious soul and beautiful figure be lost from the earth.” And Isaac told these words to his father, but Abraham said to him, “Take heed of him, and do not listen to his words, for he is Satan endeavoring to lead us astray from the commands of our G-d.”
And Abraham rebuked Satan again, and Satan went from them, and, seeing he could not prevail over them, he transformed himself into a large brook of water in the road, and when Abraham, Isaac, and the two young men reached that place, they saw a brook large and powerful as the mighty waters. And they entered the brook, trying to pass it, but the further they went, the deeper the brook, so that the water reached up to their necks, and they were all terrified on account of the water.
But Abraham recognized the place, and he knew that there had been no water there before, and he said to his son: “I know this place, on which there was no brook nor water. Now, surely, it is Satan who does all this to us, to draw us aside this day from the commands of G-d.” And Abraham rebuked Satan, saying unto him: “The Lord rebuke you, O Satan. Be gone from us, for we go by the command of God.” And Satan was terrified at the voice of Abraham, and he went away from them, and the place became dry land again as it was at first. And Abraham went with Isaac toward the place that God had told him.”  – Louis Ginsberg, “Legends of the Jews Vol. 1”

* * *
Let’s review the main points of this parable. Abraham and Isaac are traveling through the wilderness, and Satan comes to tempt them three times. Each time he is rebuked by Abraham, and the last time Abraham says, in essence, “Away with you, Satan! For God has spoken, saying…” Abraham answers Satan by quoting the words of God.
(You probably noticed above that in the parable, Isaac was referred to as one “who did not commit any violence”. The author of this midrash was directly linking Isaac to a quote from Isaiah 53:9, “He had done no violence, neither was there any deceit in his mouth.” Isaiah was speaking of the coming “servant of Hashem” who would suffer, not for his own deeds, but on behalf of others.
While it may be currently fashionable among skeptics to reason that the “servant of Hashem” in Isaiah refers to the nation of Israel and not to an individual, prior to Rashi (1100’s AD), the rabbis who recorded the ancient oral tradition in the Mishnah and Gemara (100-500 CE) declared unanimously – a rare occurrence – that Isaiah 52 and 53 spoke of none other than the suffering Messiah.
A Willing Sacrifice
“And Abraham took the tree for the offering, and placed it on Isaac his son. He took in his hand the fire and the knife, and the two of them went on together in unity. Then Isaac spoke to Abraham his father and said, ‘Father,’ and he said, ‘Here I am, my son.’ And he said, ‘Here are the fire and the tree, but where is the lamb for the offering?’ And Abraham said, ‘God will see for Himself a lamb for the offering, my son.’ And the two of them went on together in unity.” – Genesis 22:6-8
The Midrash Rabbah, commenting on the book of Genesis, says: ” ‘And Abraham took the wood for the offering and placed it on Isaac his son’ (Genesis 22:6) – likened unto one who carries his own cross on his shoulder.” – Genesis Rabbah 56:3
Remember that according to the rabbis, Isaac was in his 30’s at this time, which means that there was no way that Abraham, a 130-year-old man, could have bound Isaac without Isaac’s consent. Therefore, the rabbis believe that Isaac asked to be bound, lest his courage fail at the end and he try to struggle against his father who was carrying out God’s will.
“When Abraham wished to sacrifice his son Isaac, he said to him: ‘Father, I am a young man and am afraid that my body may tremble through fear of the knife and I will grieve you, whereby the slaughter may be rendered unfit and this will not count as a real sacrifice; therefore bind me very firmly.’ Thereupon, “he bound Isaac”: can one bind a man thirty-seven years old without his consent?” – Genesis Rabbah 56:8
When the text says that they traveled “together in unity”, the word, yachdav implies a unity of purpose and goal.  True unity is not possible when one man deceives another or intends to do him harm. When a willing sacrifice volunteers, only then can unity of purpose be attained.
The Midrash Rabbah also says that at the same time Isaac was bound and placed upon the “tree”, God bound all of the spiritual forces (the principalities and powers) of this world, because of Abraham’s willingness even to sacrifice his son, and Isaac’s willingness to be the sacrifice.

Imagine this scene playing out in your mind. You see a man in the prime of his life, placing two pieces of wood upon his shoulder and climbing up Mount Moriah, in a manner which is compared by the Jewish sages to a man carrying his own cross. He does this solely out of obedience to his father, and does not resist against his impending death, though he certainly has the power to do so. As he is bound and placed upon the tree, spiritual principalities and powers are utterly shaken and deprived of power. What picture comes to your mind as you read this? The parallels from this passage to Jesus’ execution are staggering.  But what does all this have to do with Abraham seeing Jesus’ day?
(To be continued …)

So Goes The Nation (The Brandeis Gambit)