You can find Part 1 here.
A Ram “Behind Him”
“Abraham lifted his eyes and behold, a ram [behind him?] held in a thicket by its horns.” – Genesis 22:13
Usually, this verse is translated to read that the ram was “behind him”. However, the Hebrew word which has been translated “behind him” is achar. Achar does not mean “behind” directionally, but “that which comes afterwards, later, that which follows” – in other words, a direction in time. The well-known Hebrew phrase acharit hayamim means “the latter days” or “the end of days”.
(In this sense, the word can have two understandings when two people are traveling, and one is behind the other. If the word achar is used to describe this situation, one observer might say, “Thus we can see that achar means ‘behind’, one person is behind the other.” But another observer might say, “No, it still doesn’t have anything to do with direction; achar means that where the one person traveled, the other person followed ‘later’.” In English, when an unpleasant event has passed, we say that it is “behind us”. In Hebrew when an event is achar, it is yet to come, at a later time.)
So the correct translation of this verse would be: “… Behold, a ram, afterwards [later on], held in a thicket by its horns.”  Now, what is a “thicket”? In Hebrew, the word savakh, can be translated “a 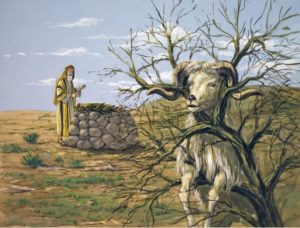 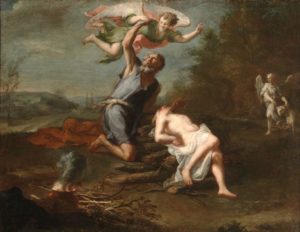 Now to what parable is the writer referring, a parable with which his readers must surely have been familiar? Since he was a Hebrew speaker, writing to the Hebrews, he would at least have been thinking in Hebrew concepts, even if he didn’t actually write the letter in the Hebrew language. So what is a common Hebrew word for a parable? That’s right… it’s midrash.
In the Midrash Rabbah and in other rabbinic writings, there is in fact a parable about Isaac which states that in the terror of the moment, as he felt the knife at his throat, he actually died there on the altar, momentarily. The parable then relates that God then raised him from the dead.
”As the sword touched Isaac’s throat, his spirit fled away; as he heard the Voice from between the two cherubim saying, ‘Do not send forth your hand against the young man,’ the soul returned to his body and he lived, and he stood on his feet. Then Isaac understood that the resurrection of the dead would take place, in the same way as he had been resurrected… and he said, ‘Blessed are You, O LORD, Who resurrects the dead.’ ”  Pirkei d’Rabbi Eliezer 31
In this midrashic parable, Isaac was not only resurrected by God’s power, but he was also seen as the prototype for all future resurrections to come. In 1 Corinthians 15:20, we are told that Y’shua became the “first fruits” of all those who had died and would be resurrected. This does not mean that nobody had been raised from the dead before Him, but was a reference to a sacrificial requirement of offering up the first fruits of the harvest at the Temple before any other harvest could be gathered in. His was the first fruits offering which would allow all others to be resurrected in the end of days.
The Horns of the Ram
According to tradition, the horns of Isaac’s ram were to be used in great events later on in history. The first horn was blown on Mount Sinai, at the time of the giving of the Torah. The other horn, which is the larger of the two and is called the “great shofar” will be blown at the time of the Resurrection, and will signal the ingathering of the exiles and the coming of the Messiah.
”The two horns of the ram are shofars (horns for blowing). The left one the Holy One – Blessed be He – sounded on Mount Sinai, as it is said, ‘The sound of the shofar (ram’s horn) grew louder and louder.’ The right one is greater than the left, and it is destined to be sounded at the Time to Come, when the gathering of the exiles takes place, as it is said [in Isaiah 27:13], And in that day, a great shofar (ram’s horn) will be blown, and the straying ones in the land of Assyria and the expelled ones in the land of Egypt will come to worship the LORD on the holy mountain, in Jerusalem.’ ” – Pirkei d’Rabbi Eliezer 31