Once upon a time, a parenthetical patrician in a black robe imparted a nugget of knowledge that, at the time, seemed to flatter the progenitors of a particular brand of civic nationalism that bedevils us to this day:

“[A] state may, if its citizens choose, serve as a laboratory; and try novel social and economic experiments without risk to the rest of the country.”
— Associate Justice Louis Dembitz Brandeis, 1932

Since it was written, this opinion has laid the groundwork for many destructive forms of progressive misadventure, in stark contrast to its superficial nod to states’ rights (not much room for secession in that laboratory, I see). Today, it is clear that the laboratory for weaponized progressive folly is the Golden(Shower) State of California, intentionally engineered to act as a beachhead for a three-pronged assault targeting the destruction of the market economy, the indiginous middle class, and the heart of a way of life.
Despite its long-standing and well-earned reputation as an incubator of hippies, liberals, and assorted lunatics of every stripe, California had a fairly staunch history of right-leaning politics. Since 1900, the state has only elected four Democratic or liberal governors — and one of them was recalled. California was the land of Reagan, and of Nixon before him. It was the last frontier in America, hardwon by the last class of Americans who saw the conquering of the wilderness as an opportunity for themselves and for their posterity.
In 1988, California’s electors went to Republican George H.W. Bush by a 51%/47% margin; beyond the urban concentrations in Los Angeles and San Francisco, the state’s bicamural legislature was also suburban-conservative. Nothing that would give the South a run for its money, but nothing at all that would foretell the Hell a mere 30 years would bring.
It began with Proposition 187*. 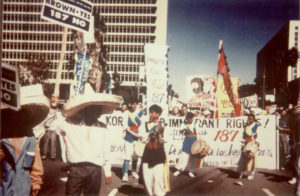 In 1994, Prop 187 (The Save Our State Initiative) was a multi-part voter-created referendum intended to prevent the flow of state money and resources to the aid of illegal immigrants, including schooling for illegal immigrant children, state aid for health care, job training, and a host of other non-emergency programs. Surely to the shock of any effete West Coast millenial reading this now, Californians overwhelmingly approved Prop 187 and vaulted the troubled Republican governor Pete Wilson to re-election, who without embracing this issue would have gone on to defeat.
Then the courts found some more interesting punembras secluded within as-yet-unexplored emanations, and decided somehow that Prop 187 was unconstitutional because it was mean-spirited, and the floodgates opened. As the illegals poured in unchecked, the whites moved away and the blacks were ethnically cleansed, while the Chinese bought everything that was put up for sale with little regard for what it was they were actually purchasing. Now the legislature is a Punch-and-Judy Show without the charm, weaponizing and inflicting every insane manifestion of lunacy imaginable, putting each through the paces before inflicting them on the rest of the country.
This is why the enemies of the West wet themselves in triggered effluvium at every perceived obstacle to wide open borders more than anything else — they know it’s the only chance they have for total victory.
Build The Wall. All along the Colorado River.
Then make it 10 feet taller.
* Of course, the 1986 immigration amnesty set the table for this, as it was intended to; they knew what they were doing.
Share this