And male and female of all flesh went into the ark as God had commanded Noah: and the LORD shut him in.
— Gen 7:16

It is an interesting detail that God himself shut the door of the ark once Noah had entered.
The detail, perhaps surprisingly, is left out of the Epic of Gilgamesh’s remembrance of the event, though what it does recall might lead well into my point:

“I watched the appearance of the weather, the weather was awesome to behold. I boarded the ship and battened up the gate. To batten up the whole ship, to Puzar-Amurri, the boatman, I handed over the structure together with its contents.”
— Epic of Gilgamesh, Tablet XI 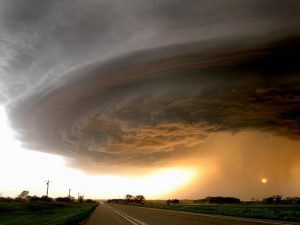 The question immediately arises, “Why did God shut the door himself?” The biblical Noah could have battened up the gate just as easily as Utanapishtim, the Sumerian Noah.
There are a number of reasons, the chief of which is doubtless that the door was a symbol of God’s salvation, an image Jesus revived when he said in John 10:9, “I am the door: if any man shall enter by me, he shall be saved.” The door symbolizes the way to God, that there is only one way to be saved: God’s way. There is only one place we have to go and only one entrance created for us to use. Today it is Jesus Christ, in that day it was belief in the message that Noah preached, which was similar to Jesus’ message (1Pet 3:19-21). This should not surprise us in the least, for our God doesn’t change.
Going through the door is not only symbolic of accepting God’s grace, but it in the case of the ark was a physical necessity. There was no praying the Sinner’s Prayer and sneaking home to catch Jon Stewart. You either entered through the door or you did not. Eight did.
The act of closing the door has a symbolic meaning as well, that of the end of God’s patience. God is longsuffering with us (2Pet 3:9), not willing that any should perish. He takes no pleasure in the death of the wicked (Eze 33:11), and had given 120 years (Gen 6:3) for the antediluvians to turn away from slaughtering one another all over the earth (Gen 6:11). That time was over, and God declared it to be over by closing the door with his own hand. Once that portal was closed there was no more opportunity, no more turning. His patience had run out.
But I think there is also a more pragmatic reason, and it is an insight my wife had while we were discussing these things. We often forget that these men were men just like us. They had like passions, similar weaknesses, they shared our concerns and our sympathies.
When the weather became awesome to behold, when the Earth burst forth in pelagic fury, when the ark began to lift into the waves, it became undeniable to those outside that everything Noah had been telling them was true, and they were doubtless horrified. The crowds who had to that moment considered Noah but a crazy old man swarmed about the ark, pounding on it, tearing at it, desperately seeking an entrance. Their screams of panic and fear echoed within the ark, piercing the hearts of all who were inside.
How painful it must have been for those safely inside to listen to the screams of Let me in! and Take my baby! How guilt must have twisted the guts of Noah and his passengers as those fervent pleas were subsumed by wind and wave. And how tempting to open the door. To save a life. To offer just one more chance. If we imagine Noah was not nearly destroyed by the death that reigned around his rising sanctuary, we do not know the hearts of men who know the heart of God.
But the decision of life or death for the people outside was not Noah’s to make. God had made the decision (Gen 6:17), God’s judgment had fallen, and God bore the responsibility for its consequences, not the old man shaking and sobbing in a pile on the ark’s filthy floor.
God was and is in control – not men – and God closed the door because he is God, and ultimately it was his door to close.
Let us then enter through the door he holds open for us today, Jesus Christ, before we find ourselves in weather awesome to behold, pounding on an ark, a salvation, that is lifting off into the waves.

The Battle of New Orleans

Wallace, the Hero of Scotland