And lo, in 1973 the practitioners of Moloch worship, through power seized through the United States Supreme Court, enacted a law that enabled the establishment of murderous dens of Moloch worship throughout the land.  In Biblical times, these were referred to as High Places.  And President Richard Nixon did nothing to stop the slaughter of the innocent to a bloodthirsty demonic horde.  And so, he left office in disgrace for his failure to uphold the sacred trust he was given.
Nixon was succeeded by Ford, who likewise did nothing to remove the high places from the land. He was challenged by Reagan in the primaries, and lost to Jimmy Carter in disgrace.
Jimmy Carter, despite his claims of being a Baptist, did nothing to push back against the unholy mandate on the land.  Instead, he banned alcohol from the White House, installed solar panels, and told people to put on a sweater.  He was thrown out of office in disgrace by Ronald Reagan. 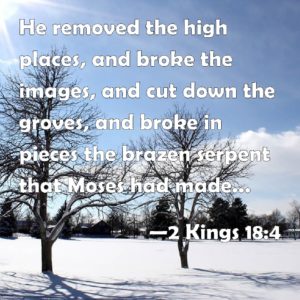 Ronald Reagan tried.  He appointed Supreme Court justices who utterly betrayed him and the American people.  He instituted the Mexico City Policy, which, at the least, prevented Americans from being taxed to fund murder in foreign lands.  But at the end of his term, the high places still stood.
George H.W. Bush, successor to Ronald Reagan, had an abominable record on abortion coming into the Presidency, and his choice for Supreme Court, David Souter, turned out to be one of the absolute worst decisions any President has ever made.  The best that can be said of George H.W. Bush is that he left Reagan’s policies in place before leaving office in disgrace, having lost to Bill Clinton.
Bill Clinton rescinded Reagan’s Mexico City Policy on his second day in office.  And he proceeded to desecrate the country with the blood of unborn children throughout his Presidency, with his policy of “Safe, Legal, and Rare”.  He appointed Ruth Bader Ginsberg to the Supreme Court, who was as bad as David Souter.  Clinton avoided being removed from office by one vote in the Senate after a series of scandals that seriously damaged the country and Presidency.  He not only didn’t remove the high places, he built more of them.
George W. Bush came into office talking a good game.  He immediately restored Reagan’s Mexico City Policy, and he forbade the use of embryonic stem cells in federally funded scientific research.  And this was about all he did.  He stopped (some) taxpayer funds from going to the bloodthirsty demon worshipers.  But the high places still stood.
Barack Obama came into the Presidency and immediately rescinded the Mexico City Policy.  He expanded federal funding for baby slaughter.  He even imposed a mandate that the religious who found it abominable must fund it through his signature “health care” law.
And now we come to Donald Trump. The man that the likes of Erik Erikson despises as being too crass and vulgar for the Presidency.  We were informed that this man was not Christian enough for the Office.  That he was merely using us; he would betray us at the most opportune moment.  That we were fools for trusting him when he said he was pro-life (we should instead have believed the charlatan Mitt Romney).  Donald Trump staked out a position that any appointees to the Supreme Court would despise Roe V Wade, and he would do everything in his power to defund Planned Parenthood.  And the bloodthirsty worshipers of Moloch are terrified because Trump has announced changes to Title X that will destroy their ability to force the American public to fund their depravity.  If Trump can pull this off, his legacy will exceed that of Reagan.  Hopefully, Donald Trump will manage to salt and burn these altars to Moloch that have been foisted upon us.

The Story of the Malakand Field Force (Part 17)