The men that stoned Stephen told him, “Watch our coats while we kill this blasphemer!”
And he thought to himself, “Blasphemers! This whole group needs to be stopped before they destroy Israel from within!” So he began to destroy this new group, entering one house after another, dragging off both men and women and putting them in prison. To the followers of Jesus, it seemed every breath of this man was filled with threats against them. He even went to the high priest to obtain permission to go from Jerusalem to Damascus—over 130 miles as the crow flies—to find and jail these people.
Then just a few years later, we see this same man almost 900 miles from Jerusalem, in Philippi, on a different continent, jailed himself, in stocks—and singing?
What happened? 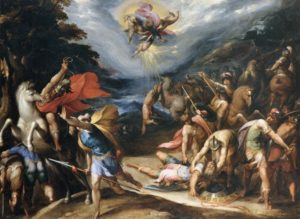 Jesus happened to this man. A bright light, a voice, blindness, healing, baptism, intrigue, fleeing, commissioning, a journey, a dispute, a resolution, and another journey. After being harassed by a demon who had possessed a slave girl, Paul turned and said to the spirit, “I command you in the name of Jesus Christ to come out of her!” And it came out of her at once. The girl’s owners were none too pleased, and Paul and his fellow missionary Silas were jailed. And they rejoiced in their captivity, preaching the Gospel to their fellow prisoners.
This is the power of Christ. The world sees the jailed jailer and thinks he was brought low. We see the jailed jailer and know he was raised up! With the persecutor becoming the persecuted, God had well and truly changed him. Paul called himself the “chief of sinners.” But he knew that the body and blood of Jesus that we see in this meal bought his forgiveness, just as it buys ours today.