Once there was a duck who thought he was a dog.
It happens on rare occasions because of an occurrence in young ducks called “imprinting.”  You see, when a duckling is hatched, its brain takes a “snapshot” of the first living thing it sees; from that point forward, the duckling identifies very strongly with whatever imprinted it.
Usually, a duckling imprints on its mother and spends his young life following her around and his adult life acting just like her. After all, he IS a duck, why would he not act like one?
But one unfortunate duckling did not imprint on his mother. When he was hatched, a friendly dog was close by.  Certain he had found his mother, he followed the dog over to a porch, under which they both lay during the heat of the day.
The duck and his mother spent many days lying beneath the porch. They spent cool evenings swimming in the pond and dark nights howling at the moon.
As the summer passed and the duckling grew, he would stretch out his wings and even flap them. Once he even took off into the air and quite scared himself, as everyone knows that dogs cannot fly.  He landed quickly and hurried back under the porch. He certainly did not tell his mother what he had done.
But as he thought about his adventure, he started to grow confused about himself and his place in the world. Because though he still enjoyed barking at passing cars and running up to whomever climbed out of one with his tail feathers wagging, he also had a strange and growing desire to take flight again.  He also felt drawn by ducks when they landed on the pond, not to retrieve them as dogs are bred to do, but to meet them, mingle with them, and maybe even (gasp) fly away with them. 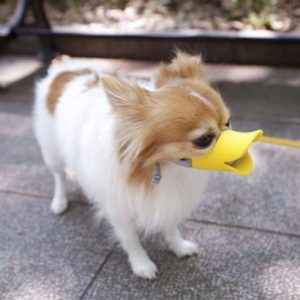 One day, while his mother was asleep beneath the porch, he waddled down to the pond and introduced himself to a trio of ducks that had just landed on it.  They expressed surprise to meet another duck here, as they had flown for days without seeing another of their kind.
“But I’m not a duck at all,” he said. “I’m a dog.”  His new companions laughed at the obvious joke, but when he neither laughed nor smiled, their faces grew confused. So he told them of his life as a dog, lying beneath the porch and barking at cars. He continued explaining until one of the ducks stopped him by raising a wing. It looked exactly like his own.
“Despite your experiences and belief,” one of them said. “You are a duck.  You have feathers and wings and a bill as ducks have but dogs do not.”  His companions quacked their agreement.
“Perhaps some dogs have feathers,” he argued, though weakly, for deep down he knew they were correct. Despite his love for his mother, and despite all the fun he’d had growing up like a dog, he could see the objective fact that he was not a dog at all. He was not even a dog trapped in a duck’s body, as if there could be such a thing. He was merely a confused duck. He could accept his nature, or he could fight it, but he could not truly change it.
Once there was a man who thought he was a woman…

The Land We Love