by Flavius Flav and Rooster

“And this also,” said Marlow suddenly, “has been one of the dark places of the earth.”
– Joseph Conrad, “Heart of Darkness”

The modern Left is nearly infallible in producing the opposite of its claimed desires. So when an article in The Stranger claims to be about “A liberal snowflake gets to know gun culture from the inside,” you might predict that “gun culture gets to know a liberal snowflake from the inside” would be the actual result.
Dawg, you have no idea.
The story itself is a bit of a journey, which you can take by clicking the link. Was the effort sincere? We’ll leave you to decide. Either way, it snakes through the leftist psyche like a main circuit cable 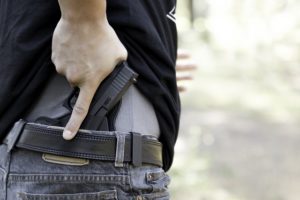 plugged straight into the id. You’ll be wanting an explanation, and for your sins, we’ll give you one. It dives deep, past identity and philosophy into the heart of darkness. And when it’s over, you may never want another. But that is not the end, even in our fallen world. At the end of all things is Grace, if only you have the courage to reach for it.
The journey begins placidly enough: the usual virtue signaling and holier-than-thou whitey trash talk, with occasional concessions to his opponents’ humanity and intelligence thrown in. Then Sean Nelson unveils the classic Black Like Me storyline. Can you spot the key tell?

“My project was simple: Buy a handgun and carry it, loaded, on my person, for some period of time. My goal was even simpler: See how it felt. Prior to this experiment, I had never even held a handgun…. I was a neophyte, verging on phobic. I thought of guns as dark magic, unpredictable talismans, better left alone.
I had no illusion that learning to hold, shoot, own, care for, and carry one would make me an expert in anything, only that it would bring me one step closer to being able to participate in the gun-control debate without having to say, “I mean, I’ve never even held a gun before…. The first step was to apply for a concealed carry permit.”

You probably missed it. Let’s follow the river where it leads.
We’ll start with the easy stuff: identity. After a promising start ripping on Glocks, Sean lets this slip:

“…the idea that a gun could be a thing of beauty is totally alien to me. It’s a gun. It’s a tool. It’s for killing people. How can that be beautiful? I feel the same way about cars, by the way…. I remember boys bringing car magazines to school starting in fifth grade, comparing this or that Ferrari or Lamborghini, and realizing that there were certain aspects of masculine bonding that would never be available to me.”

So “Sean Nelson” is a man, yet he has seen “boys” as an outside group (else he’d be writing “other boys…”) since Grade 5.
Things that make you go “Hmmmm…” What is it with certain white people?
Look, there are two different ways to treat your gun like your dick. One will probably get you killed. The other makes you like this author. Don’t be that guy. “Muh dick!” is stupid. “Muh dickless!” is worse.
If you cannot own your identity in a grounded way, you are vulnerable to others who will own it for you.
Is that the key tell? No. But this level of alienation is often that tell’s foundation. Learn to look for it. It can be a pressure point or a wound that needs bandaging, depending on your mission at the time.
Our next step toward the heart of darkness leads us through philosophy:

“More noteworthy to me is the often unspoken truth that if you’re going to carry a concealed gun on your person, and you really believe you’re doing it as a form of self-defense, you must be prepared to take someone’s life. Not in theory, like if you had a time machine, or some far-flung nightmare scenario, but right now, right here, everywhere you ever go…. I believe living in a state of constant readiness for disaster invites disaster. I believe the presence of a gun invites problems for which a gun seems like a solution.”

Ah, the Rabbit Credo from political r/K theory. Readiness for disaster brings disaster. Readiness for conflict brings conflict. Resources must be free, conflict must be avoided, and the state must be our God so it can bring us these blessings at the point of its guns, while leaving us free from taint.
You can tell that deep down he wants to shoot someone. And he projects and assumes that everyone who is pro gun wants to shoot someone. If you don’t believe that yet, stick with us.
So, is this the key tell? No.
The key tell is unspoken here, though he has referenced it twice now: magick. 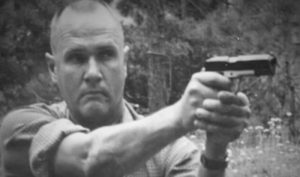 The Rabbit credo’s rationalization is classic negative sympathetic magick, just like their overriding need to appease envy’s “evil eye.” The idol of the state is the talisman that protects the state-worshipers from hostile sympathetic magick, while avoiding the taint of encountering that magick directly.
One of us has a liberal attorney friend who has represented some of the worst criminals in society. He maintains that all people – including the criminals – are essentially good people whose environment caused them to do a bad thing… or maybe it was 20 bad things, as most criminals are frequent fliers.
Now, understand how this transfers. Their subliminal “logic” is that the guns ARE causing people to murder. Because when they are in the presence of a gun, their inherent evil tendencies are made so strongly manifest that they can’t deny those tendencies. So they blame the desire on the gun rather than being self aware.
To recap and extend:

This is Leftism in toto. This is its core.
But the rabbit hole isn’t done with us just yet. Remember Sean’s earlier reference to “dark magic” and “unpredictable talismans”? He wasn’t kidding. Welcome, at last, to the heart of darkness:

“I knew there was an element of this experiment that was playing with fire. I knew I was carrying around the power to kill anyone I saw.
But I also knew the truth of the matter is that there’s only one person I’ve ever wanted to kill.
….The first time I was hospitalized for acting on suicidal ideation, I was 15 years old. It wasn’t a serious attempt—but it was a serious harbinger of the nearly 30 years that have followed. During that time, my feelings on the subject have ranged vastly, from no danger at all to dialing the first two digits of 911. I have envisioned killing myself in styles baroque and anonymous. I have written extensive suicide notes, including personalized messages to everyone I care about. I have pushed the edge of a razor blade until the tip punctured my wrist, and then stopped. But the realistic, recurring fantasy has always involved a gun.
I don’t feel suicidal all, or even most, of the time. I take medication to help…. Though I hadn’t admitted this to myself earlier, it was perhaps inevitable that the very first thing I did when I brought the gun home and was alone with it was to put it in my mouth. Unloaded at first, then loaded (which may account for my difficulty loading the magazine). I danced around this ritual for a long time, several hours in fact, but I knew I had to get up close to it. This was the step beyond the drive-by, beyond the parking, beyond the browsing. This was brinkmanship with the part of myself that insists my existence has no value, that things will never improve.”

Now do you believe us?
For those of you who don’t know, concealed carry permit applications always ask an important question:

SJWs always lie. Even in the process of admitting to uncomfortable truths. Why?
They lie because they cannot face the darkness. That lie leads to all other lies. Those lies pave the path for their false escapes into magick.
And the Father of Lies smiles.
Courage really is the first Virtue. Reasonable pro gun people recognize that all men are by default capable of desiring to do evil, and in fact are capable of doing anything if pushed far enough. So they face that dark truth. They seek to control those desires within themselves, rather than give in or externalize the problem. And they make sure that they have an option when those safeguards fail in others. Because they will not be complicit in the deaths of those they love.
The snowflake has no moral code, so he intuits that he has no reason to control those desires… That he WOULD stick the gun in his mouth and pull the trigger… Or kill someone who committed a minor offense against him.
And his intuition is correct.
And his protective magick is a lie.
And those who hew to him are as sheep to slaughter when the Day of Testing cometh.

Grace is the reward for courage. And there is courage in everyone, if they will seize it. We ripped on Sean Nelson, but he had enough courage to step out of The Cloud People Bubble, confront something that scared him, and publicly admit some hard truths about himself. That’s not nothin.’
The river of his admissions revealed more than he knew, and he stopped before facing the fulness of the truths he had uncovered. We mourn that he stopped. But we celebrate that he started. We teach from his examples, light and dark. And we encourage you to start others on similar journeys while showing a powerful positive example, as Men of the West like Larry Correia have done so successfully. In time, we hope that Sean may complete his journey. Meanwhile, learn from his example. It’s a very old one:
Be a Man of the West. Choose courage. Choose life.


*           *           *
About the guest author:
Flavius Flav says he’s “always happy to fight the power and bring the noise, but my uzi weighs a ton.” Still, if you’re a public enemy of Western Civilization, you’re gonna get yours. He lives the surreal life, chronicling the corplantationopoly.