Everybody knows that the price of college in America is going through the roof.  It has significantly outpaced inflation.  And there are hoards of young people who were sold a false bill of goods by their well meaning parents, grandparents, and society at large.  Unfortunately, the idea of “everybody should go to college” hasn’t worked out for the US.  Not only are we experiencing a shortage in the trades that Mike Rowe has been particularly articulate in pointing out, but many of these young people are now saddled with college debt that they will never be able to repay. These loans are also a debt that cannot be discharged in bankruptcy thanks to the Democrats and Obamacare (yet one more reason why Obamacare must be repealed and John McCain betrayed us all when he kept it alive). 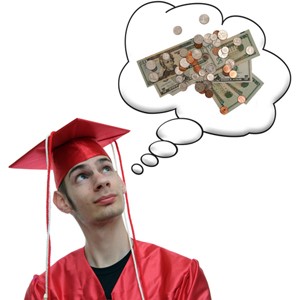 In a sane world, banks would only give college loans based on the earnings potential of the degree.  So, that would make it almost impossible for you to get financing for a Gender Studies degree, but it’s not just a problem for the kids who picked dumb majors.  It’s a problem for kids who have real talent but aren’t good enough at math to be an engineer, but would make an excellent contractor.  But, since the debt now cannot be discharged no matter what happens, young people are signing themselves up for a lifetime of debt-slavery in order to get a degree that doesn’t help them advance their life.  They can’t buy houses and build families because these loans are strangling them.  Further, the easy access to federal money is driving the cost of tuition through the roof.  The best students are the ones who want to be there and are motivated to earn their degrees.  Making college so that it’s affordable for students with a part time job and a little help from their families is important.  Making college a 4-year party because mom and dad said you had to either go to school or get a job is a terrible blight on our society.
Furthermore, the American University System has become completely and totally SJW converged.  Some colleges are better than others, but on the whole,  we would be better off as a country without most of them at this point.  They spend more time on gender studies and liberal social issues than they do on topics of actual value to us as a society.  How many professors are doing something like this in their classrooms?  If you will note, telling her students to lock out Fox News on their parents cable boxes was the least of her very partisan left wing suggestions.  And this is what we are permitting an entire generation to enter into a lifetime of debt slavery to finance.  It has to stop.
So, what do we do about it?
According to Forbes, the current student loan debt stands at about $1.5 Trillion.  George W. Bush’s foolish Troubled Asset Relief Program wound up costing us somewhere around $15 Trillion if this guy is to be believed.  So, we can do something about it.  And the path forward is very likely going to be restructuring those loans to limit the damage that compound interest is going to do to the people who were sold a false bill of goods on the value of their college degrees.  The colleges that benefited from this feeding frenzy also need to face some scrutiny over their continued offering of largely useless degrees for six figure sums of money.
We are going to be looking at this topic more in the coming weeks.

The Changing College Student And Debt