Editor’s note: The following is extracted from Heroes and Hunters of the West, by H. C. Peck and Theo. Bliss (published 1860).

Jesse Hughes was born and reared in Clarksburgh, Harrison county, Virginia, on the head-waters of the Monongahela. He was a light-built, active man, and from his constant practice became one of the best hunters and Indian fighters on the frontier. Having a perfect knowledge of all the artifices of the Indians, he was quick to devise expedients to frustrate them. Of this, the following exploit is an illustration. At a time of great danger from Indian incursions, when the citizens in the neighborhood where in a fort at Clarksburgh, Hughes one morning observed a lad very hurriedly engaged in fixing his gun.

“I am going to shoot a turkey that I hear gobbling on the hill side,” replied Jim.

“I hear no turkey,” said Hughes.

“Well,” said Hughes, after hearing it repeated, “I’ll go and kill it.”

“Well,” said Hughes, “but you know I am the best marksman; and besides, I don’t want the turkey, you may have it.”

The lad then agreed that Hughes should go and kill it for him. Hughes went out of the fort on the side that was farthest from the supposed turkey, and running along the river, went up a ravine and came in on the rear, where, as he expected, he saw an Indian, sitting on a chestnut stump, surrounded by sprouts, gobbling and watching to see if any one would come from the fort to kill the turkey. Hughes crept up and shot him dead. The successful ranger then took off the scalp, and went into the fort, where Jim was waiting for the prize.

“There, now,” said Jim, “you have let the turkey go. I would have killed it if I had gone.”

The lad nearly fainted, as he thought of the death he had so narrowly escaped, owing to the keen perception and good management of Mr. Hughes. 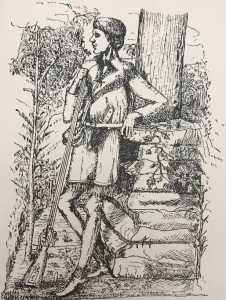 The sagacity of our border hero was fully proved upon another occasion. About 1790, the Indians visited Clarksburgh, in the night, and contrived to steal a few horses, with which they made a hasty retreat. About daylight the next morning, a party of twenty-five or thirty men, among whom was Jesse Hughes, started in pursuit. They found a trail just outside of the settlement, and from the signs, supposed that the marauding party consisted of eight or ten Indians. A council was held to determine how the pursuit should be continued. Mr. Hughes was opposed to following the trail. He said he could pilot the party to the spot where the Indians would cross the Ohio, by a nearer way than the enemy could go, and thus render success certain. But the captain of the party insisted on following the trail. Mr. Hughes then pointed out the dangers of such a course. Suddenly, the captain, with unreasonable obstinacy, called aloud to those who were brave to follow him and let the cowards go home. Hughes knew the captain’s remark was intended for him, but smothered his indignation and went on with the party.

They had not pursued very far when the trail went down a drain, where the ridge on one side was very steep, with a ledge of rocks for a considerable distance. On the top of the cliff, two Indians lay in ambush, and when the company got opposite to them, they made a noise, which caused the whites to stop; that instant two of the company were mortally wounded, and before the rangers could get round to the top of the cliff, the Indians made their escape with ease. This was as Hughes had predicted. All then agreed that the plan rejected by the captain was the best, and urged Hughes to lead them to the Ohio river. This he consented to do, though fearful that the Indians would cross before he could reach the point. Leaving some of the company to take care of the wounded men, the party started, and arrived at the Ohio the next day, about an hour after the Indians had crossed. The water was yet muddy in the horses’ trails, and the rafts that the red men had used were floating down the opposite shore. The company was now unanimous for returning home. Hughes said he wanted to find out who the cowards were. He said that if any of them would go with him, he would cross the river, and scalp some of the Indians. Not one could be found to accompany the daring ranger, who thus had full satisfaction for the captain’s insult. He said he would go by himself, and take a scalp, or leave his own with the savages. The company started for home, and Hughes went up the river three or four miles, then made a raft, crossed the river, and camped for the night. The next day, he found the Indian trail, pursued it very cautiously, and about ten miles from the Ohio, came upon the camp. There was but one Indian in it; the rest were all out hunting. The red man was seated, singing, and playing on some bones, made into a rude musical instrument, when Hughes crept up and shot him. The ranger then took the scalp, and hastened home in triumph, to tell his adventures to his less daring companions.

Jeff Cooper On Failure To Stop