Editors Note:  This article is going to cite some websites that are Not Safe For Work.  The links here are ok, but the sites that they reference can get you into trouble.  You have been warned.

It has come to our attention via a tweet from Tara McCarthy that there is a “March Against Communism” set for December 28 in Charlotte, NC.  If this sounds familiar, it should.   The Idiot Richard Spencer is involved just like the Charlottesville Fiasco.  If you need a refresher, please start with our Thoughts A Week After Charlottesville.  This is the same kind of trap.  A very liberal city with a history of manipulating things for political purposes, in a state that, unfortunately, has a democrat governor.  The exact same thing is going to happen, assuming you get permits to have a rally, the local leadership is going to order law enforcement to fall back and let the commies, who will be bussed in

from all over the country, beat you senseless.  But they’re aware of that, and that is why they are planning to bring guns.

Yes, you read that right.  The group organizing this jolly little adventure refers to themselves as Anti-Communist Action, because referring to themselves as Stormtroopers would apparently be a little too historically accurate.  Now, in the wake of the post cited at the start of the article, they have amended their event page to say the  following (the original was archived and is available here:  http://archive.is/viyU0 )

Bring your torches, gear, and flags! As for guns, we’re waiting on specific info from the police. Make sure you act within local, state and federal firearm laws. Stay nonviolent, and we’ll have a great time. Augustus Invictus, Richard Spencer, Dillon of Vanguard America, and many more will be speaking. Once night falls, we’ll (peacefully) march into downtown Charlotte and show the size our ranks. 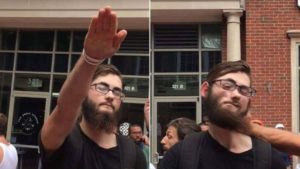 But here’s the problem.  As some of you guys may know, Vox Day is prepping to see if there’s any interest in his Alt-Hero project.  During one of his periscopes somebody asked him if he was planning to put artwork of Mohammed in them.  The answer he gave was pretty good and it applies here.  This is not a game, and you don’t do something like that unless you are prepared to deal with the consequences.  The same applies here.  You DO NOT walk into an enemy stronghold armed without the intention of using those arms.

Let us just put this as simply as we can.

I hope that is sufficiently clear.   If not, I will try to arrange for The Kurgan to explain it in simpler terms.

But while we are on the subject, I want to take a paragraph and address something we’ve seen come out of the Charlottesville rally that is beyond unacceptable.  And that is the flying of the Confederate Battle Flag in conjunction with any kind of NAZI symbolism.  What happened in the South during the Civil War is not comparable to what the Germans did under Hitler.  The South was, by and large, right.   Any of you idiots that want to LARP as NAZIs, leave the Confederacy out of it.  We are not going to let our sacred symbols be usurped by a bunch of third rate alt-retards who would have been killed by the Third Reich for being too mentally inept to keep around.

Thoughts on the NFL protest