As I sit here writing this, it has been a week since the Charlottesville incident.  The whole thing just rubs me the wrong way.  What started as a rally against removing Confederate memorials has been turned into something different.  But, before we get started on the things that bother me, I just want to take a moment to point out that had the people planning that rally read Men of the West, they would have known better than to let Richard Spencer and his traveling circus of undesirables anywhere near their rally.  They should have seen the signs that they were being set up.  They walked right into a trap designed to bolster Antifa and make the political right look like a parade of the biggest boogeymen of the 20th century.
The fact that, in Texas this past weekend, there were a number of similar rallies that didn’t result in violence raises some very large questions.   As we all know, the Charlottesville police department did almost nothing to keep the rally goers and antifa apart.  Why?  We know from Texas that it would have worked.  There’s been a lot of speculation as to why exactly the Charlottesville police did that, most of it centering around the city’s mayor and Virginia Governor (and well known Clinton minion) Terry McAuliffe.  And I very sincerely hope that Jeff Sessions is looking into who told the police not to involve themselves, not just to for the sake of knowing, but for the sake of prosecuting them to the fullest extent of the law for endangering the public as well as a grievous abuse of power. 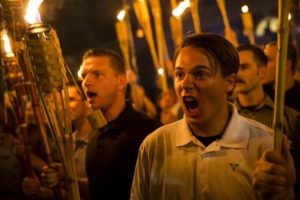 What happened in Charlottesville was so egregious that the ACLU is siding with the rally goers.  That’s how far upside down the world has turned.  Antifa assaulted people.  Heather Heyer wound up dead because of the games these politicians are playing.  James Fields, the guy driving the car, has had his life ruined.  Now, there’s a lot of speculation that the antifas were hitting his car and he could make a legitimate case that he feared for his life.  That won’t take back what happened.  In 2 or 3 years, when the case finally gets resolved, the true perpetrators will be off the hook.  Terry McAuliffe may himself wind up running for President, using this incident to springboard to the head of the line in the Democrat primary.
The Boston free speech rally was a disaster for free speech. Thousands came out to oppose it, having bought the media lies hook line and sinker that they were opposing the National Socialist German Workers Klan. It’s time for anybody who wants to try to win this fight to take a step back, and buy Bill Lind’s 4th Generation Warfare handbook – because the past 2 weeks have been a series of mistakes on the 4th Generation Battlefield.
And for the love of all that is good in the world, when somebody tells you that Socialists Are TO THE LEFT, Listen To Them.