Side-by-side articles on CNN illustrate why liberal appeals to religion always fail.
The first introduces us to a modern martyr:

When John Dominic Crossan was a teenager in Ireland, he dreamed of becoming a missionary priest. But the message he’s spreading about Jesus today isn’t the kind that would endear him to many church leaders.
Crossan says Jesus was an exploited “peasant with an attitude” who didn’t perform many miracles, physically rise from the dead or die as punishment for humanity’s sins. 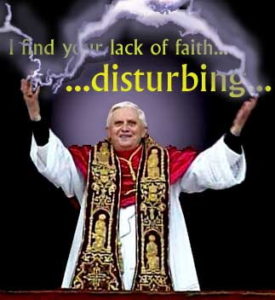 Crossan, the co-founder of the Jesus Seminar*, is a typical modern liberal Christian. Far from being the martyred scholar of the CNN article, he sits right in the mainstream of Mainstream Christianity, that ever-shrinking, fading portion of Christendom that dominates Religious Studies departments across the fruited plain. His Jesus is, not surprisingly, just the kind of guy Crossan imagines himself to be. Liberals always manage to make gods in their own image; they are the kind of gods who would chant at a union rally one day and cry on Oprah the next. But he would never, ever, make someone feel bad**.
The second is like unto it:

A coalition of progressive Christian leaders*** has taken out a full-page ad that asks “What would Jesus cut?” in Monday’s edition of Politico, the opening salvo in what the leaders say will be a broader campaign to prevent cuts for the poor and international aid programs amid the budget battle raging in Washington…
The ad and the broader campaign are aimed mostly at a spending measure passed by the Republican-led House of Representatives that cuts $61 billion from current spending levels, including cuts to Head Start, the Women Infants and Children (WIC) program and international aid programs.

Religious liberals love to de-power Jesus. Being Unitarians to the extent they are theists at all, they eliminated his deity quite early. Being philosophically of the materialist school, they can’t have a god who interferes with the universe, so out go his miracles. Jesus walked on water? Well, that was really ice. A wind parted the Red Sea for Moses. And on and on.
Then once they have cut him down to a first century Caesar Chavez wannabee who lived and died**** in a little backwater province of a defunct empire 20 centuries ago, for some reason they try to appeal to him as some sort of an authority on 21st century American fiscal policy.
Now, let me ask a really stupid question: Why would I give a rat’s ass what some 2000-years dead, exploited “peasant with an attitude” cared about taxes?
* Which discovers the true sayings of Jesus by having “scholars” drop white or black marbles into a bag. This uber-scientific methodology has determined beyond dispute that the only two authentic words in the “Our Father” are, wait for it, “Our Father.”
** unless that person was a Republican.
*** a euphemism for professional religionists who are drawn like loose iron filings to the magnet of political power. Jesus with power? Perish the thought. But a government is the kind of power they can get behind.
**** And stayed dead this time.