Editor’s Note: We are happy to offer another contribution from our friend, Adam Piggott. You can read this (and other) posts on his site, as well.
During my time spent living as a rafting guide in Uganda I had many unusual and extreme experiences to say the least, (documented in my hilarious and gripping first book, Pushing Rubber Downhill. Buy it now; you know you want to.) 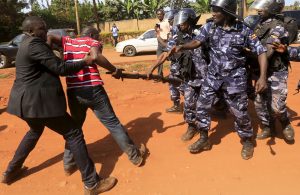 Common to many of the crazy situations that I found myself in was the ability of the locals to morph from seemingly normal people going about their daily tasks, to frothing at the mouth and enthusiastic mass murderers. Actually perhaps frothing at the mouth is not quite accurate. They were almost in a state of rapture. Men, women, and children of all ages would throw themselves into the task of murdering whoever was the unfortunate target of their attentions.
This could happen in many ways. A common event was for someone to cry ‘thief’ in a crowded market and before you could say sam-sam patoke, whoever it was that had been accused, whether justly or not, would have been reduced to a pile of dismembered remnants on the bloody ground.
The truly disturbing thing would be the calm way that everyone concerned would return to their previous tasks as if nothing untoward had happened.
According to historical records this sort of behavior was also common in medieval Europe with the homicide rates being a great deal higher than what we see today. But gradually over the centuries things began to improve. The 15th century was already far safer than it had been 300 years previously, and so it went over many generations.
The point is that it takes a long time to civilize a population. Behaviors are instinctive and hardwired into our DNA. What I was witness to in Uganda is no doubt similar to what attitudes and norms would have been in medieval Europe. This is not surprising when you consider that Uganda was only discovered by the civilized world in the 1860s. The same year that the wheel was introduced to Uganda, the world’s first underground train station opened in London.
The British may have given Uganda an entirely new system of laws, governance, religion, agriculture, infrastructure, architecture, transport, and all the rest, but the underlying DNA of the people was still beholden to their recent past. You do not change hardwired behaviors overnight. It takes many generations.
The progressive delusion of multiculturalism and the accompanying worship of diversity completely fails to take into account these biological realities. The perceived common wisdom is that you can take itinerant peasants from backwards India or Africa and transplant them into a modern western society and that they will somehow overcome all of their ingrained DNA behaviors and somehow immediately adopt our series of western values.
This is commonly referred to on the alt-right as the magic dirt theory:
As an implicit endorsement of diversity, DR3 subscribes to the “Magic Dirt” idea that if we take people from the third world, bring them to our lands and instruct them in propaganda for our system and culture, they will take it up and suddenly become us. This both replaces us and replaces their own culture with ours as a dominant colonial power.
The almost insurmountable problem associated with magic dirt thinking is that it has become so pervasive that most modern conservatives consider it to be a viable norm. This is due to the fact that so many third world migrants have been imported that to think otherwise is too difficult as the conclusions that one must draw are far too confronting.

Recently I attended the launch of Steve Kates’ new book on Trump, The art of the impossible, which was also memorable for the attack on guest speaker Andrew Bolt as he was entering the building. In his speech, Kates described his early years as a leftist and how reading The Gulag Archipelago fundamentally changed his political thinking. He also spoke about how he did an online test to discover what percentage of his political views were shared with Trump’s policies, with the score being 94%.
I agree with Kates on a great deal of what he has to say, particularly in the field of economics. But just as he is not in total alignment with Trump, nor am I with Kates.
An audience member asked Kates a question about unfettered immigration from third world nations to Australia. Part of Kates’ response was the following line:
Anyone can become a Westerner. It’s just a value system.
I am in profound disagreement with this statement as it is pure magic dirt thinking. Kates said it almost as a throwaway, as if it was something so obvious that he shouldn’t have had to even say it. But it is entirely erroneous to believe that western values are so easily transplanted. A value system is not just something that you believe; it is hardwired into your DNA. It is how you will approach a situation instinctively. And it takes many generations to breed it in, or out as the case may be.
The fact is that not anyone can become a Westerner. To say otherwise is to demean the entire Western value system. If it is so easy to adopt then by default it must also be so easy to discard. I did not adopt the Ugandan value system when I lived there and nor did any other Westerner that I knew, and for the simple fact that the Western system of values is far and away superior to both the Ugandan one and any other in the world today with the possible exception of the Japanese.
Immigration in the past relied on people of a similar genetic background who shared the same DNA traits, thus making it far easier for successful results due to the value systems being compatible. Immigrants from inferior cultures were able to be absorbed both due to their small numbers and their willingness and enthusiasm for western culture.
Part of the reason that the left have been so successful in subjugating and infecting modern society is that they have managed to get their ideological opponents on the right to take on aspects of their dogma and regurgitate it as if it were their own. On multiculturalism they have been particularly successful. It is now assumed on the right to be common knowledge that anyone in the world is capable of adopting Western values.
Until this lie is confronted and overcome then the right will continue to lose ground to the left as our societies are swamped by more and more invaders who pretend to hold to our values while it suits them. Identity always trumps politics and DNA is the basis of identity.