Editor’s Note: We offer another thoughtful piece from our  young friend, Jasper Thorsson.
Most everyone talks about marriages being essential, foundational, but the only real metric I have heard thrown down for a successful marriage is personal happiness, or perhaps the numerosity of children, no matter which group of people I consult on the matter. I have found that approaching the union with higher goals than those has led to a greater sense of peace and stability than many of my similarly-aged peers: I desire a productive marriage, not merely a happy one. As a Western man I draw my marital ideology foremost from Genesis, and the idea of a marriage being productive is older even than that venerable book:

“God created man in his own image. In God’s image he created him; male and female he created them. God blessed them. God said to them, ‘Be fruitful, multiply, fill the earth, and subdue it. Have dominion over the fish of the sea, over the birds of the sky, and over every living thing that moves on the earth.'” 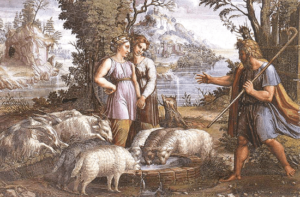 How many marriages in Genesis were about personal happiness, or even based on having the most children possible? A reasonable summary would look at the marriages of Jacob the patriarch: Tricked into marrying Leah (translates to ‘Cow’ by the way) after seven years of field work, he then worked seven additional years to marry Rachel, the beauty that he had set his eyes on in the first place. Both have their faults (portrayed as deception in both cases, which is interesting) and both carry the typical redemption factors suggested as the prime goal of marriage yet neither are praised as better than the other except in Jacob’s eyes; Rachel is his beloved and valued highly, yet Leah is given children to bring peace between her and her husband. Still, the two imbalanced sisters contended ineffectually for years as we see with Naphtali. More to the point, both were unsatisfying because, in the end we see that the only produce of them came from God’s noteworthy and supernatural intervention as the normal bonds of in-laws were transformed into shackles in chapter 31, particularly:

“Rachel and Leah answered him, “Is there yet any portion or inheritance for us in our father’s house? Aren’t we considered as foreigners by him? For he has sold us, and has also used up our money. For all the riches which God has taken away from our father are ours and our children’s.”

Jacob had many children with Leah and a comely and desirable wife whom he loved dearly in Rachel, and his wives desired him and his regard yet back then it was easily understood that an unproductive marriage was frustrating. So how do we avoid that frustration and achieve a truly happy marriage? I present now a few ways that having strong, closely-related roles can turn a marriage that has followed the advice of the multitudinous voices in the marketplace by looking for affection and regard as well as having children into a balanced and fulfilling marriage.
A productive marriage has an external focus, not an inward one. If all your energy is being spent internally, you cannot sally forth from your castle to trade or pillage and bring the profits home; there will always be maintenance, but if your energies end at your walls and gates you will be frustrated at your lack of progress. Our bodies were made to work and hurt and achieve, and then to recover and heal and enjoy. The human animal wants to move forward. You must change your mindset from that of the comfort-seeking addict which is portrayed as the ultimate dream by media everywhere to a goal-setting pioneer. Get an ambition, even if it is only for you or your family: Find a way to monetize a hobby, compete in some competitions, stretch yourself, actually get fit—then set the next goal higher. This type of mindset is not just for the young, disconnected and free agent youth, and is clearly supposed to follow into a close union. After all, what business partners would unite without an ambition? Just like business partners, a husband and wife have other elements to their existence than just business interests, but the business they do feeds the rest of it. Literally. The same rules for surviving on your own apply to a marriage:

“The man said, ‘This is now bone of my bones, and flesh of my flesh. She will be called ‘woman,’ because she was taken out of Man.’ Therefore a man will leave his father and his mother, and will join with his wife, and they will be one flesh. The man and his wife were both naked, and they were not ashamed.”

Put another way, the two saw everything that the other was going through and were not afraid to share it. So should we be, joined. It might be his job to bring bacon and supply the home, but there is certainly work for you to do that directly supports him instead of just the indirect things; seeing to the kids’ development and taking care of the housework might be her job, but there is much you can do to support her efforts and ambitions in her realm. Grow together, expand together. We have all experienced the negative feedback loops of apathy and jealousy, so focus on creating the positive feedback loop of encouragement in achievement just as you would if apathy or jealousy were present in your affection or desire for your partner. Having strong and well-defined roles will allow several ways to maximize your support for your spouse’s achievements. 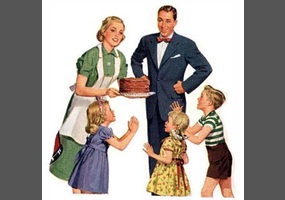 First, strong roles reduce options and prevent you from having your energy sapped as you sift through choices. It streamlines your decision-making. You are by no means limited to cultural or traditional roles in trying to achieve this, though they have likely come about because of a long history and are useful to ease communication of the roles; Still, it is yours to define. Having responsibilities also do not mean that you never help the other out or that there is zero overlap, but rather that it ensures the different areas all receive someone’s attention instead of being lost in the shuffle as you both try to get things done. It cleans up what is on your proverbial plate, and allows you to supply and reinforce instead of worrying about everything yourself. This is a very strong internal change you can make to maximize your achievements.
Second, strong roles minimize the amount of time that is required for coordinating for events and obligations and lowers the amount of energy you need to devote to planning. Going completely alone means you lose the benefits of specialization so there will always be some, even in an ideal scenario, but keeping it to a minimum is important to reduce drag. If you constantly have to reevaluate or get new details instead of simply trusting the other to handle things that are mild, you are slowing down and bleeding energy. Another benefit of the strong rolls is that it makes each of you the point-of-contact by outsiders and people looking to access your family and shared skill pool: They will learn and come to know who to talk to about certain issues, and this means saved time and energy too!
Thirdly, strong roles breed a deeper and stronger sense of responsibility in those who have the roles clearly defined. It allows you to see and manipulate feedback loops and develop tools to take better advantage of your role. This is why it used to be a serious community tragedy when one spouse died while in modern times we tend to focus on the emotionality of the loss instead of the practical loss—we do not specialize as heavily and take on these roles and rely on our spouse as much, in this age of no-fault divorces and footloose natures with carefully-pruned friend groups instead of needing to fit into the organic communities that developed. Essentially, specialization makes productivity go up and makes things get done faster and better. Even God’s judgment that led to mankind being cast out from the garden of Eden was specialized, reflecting the intimate relationship between man and wife.
The time-worn tale of an ambitious person marrying one who has plentiful resources with which to achieve the craved goals is a good indicator of the universality of strong roles on a productive marriage: Both get what they want by approaching the marital union primarily as a business merger. It is a serious consideration: How well will we eat and live together? If this is all there is to a marriage, it goes without saying that a hollow and empty house is undesirable after it has been established, but we have the three elements present that create the wonderful balance in the most important relationship in a person’s life: A spirit of love, progeny as a shield against age and death, and now a fulfilling goal in the immediate moment with the awareness of productivity being key.
What are a few things you have done to help your spouse be productive? What have they done for you? What do you make together, what are you forging and creating?