It is interesting and somewhat amusing to me that a vast majority of so-called Christians miss the most fundamental aspect of Christianity. 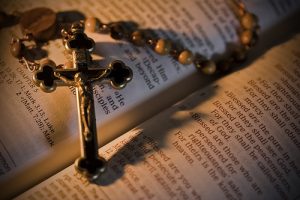 And when you tell them what that is, many of them go off on indignant rants or flat out refuse to “believe” it.
They will sooner accuse you of lying or being wrong than bother to verify this simple fact, which takes ten seconds on google or using any Bible you may have at hand.

And what is this fundamental fact that is so shocking to these faux Christians? Simply this:

This planet, and in my opinion the entirety of what we refer to as the material, physical universe, falls under the domain of the Prince of the Air. The Father of Lies. The Prince of Darkness. The Serpent in the Garden of Eden. The Enemy. The Eternal Psychopath. First of the fallen Angels. Satan. Lucifer. Take your pick, after all, his names are Legion.

I suppose it is to be expected that Churchianity, as opposed to Christianity is so widespread when the current Heretic Pope Francis also seems to be either too stupid to know this, or intentionally trying to obfuscate this fact, as is clear from his answer in the Philippines to the little girl who asked why children have to suffer so much in the world. His reply was that there is no answer and we must learn to cry. In other words, the Pope is a Churchian. And that is being kind, because my personal opinion is that he may well be the Herald of the Anti-Christ if his reply is intentional as opposed to just ignorant. You can see the video of his own words and an analysis by a more “hardcore” Catholic website here: Francis Stumped— Can’t Answer Child’s Question about Suffering, says “There is no Answer.”

Regardless of your possible belief or otherwise in Christianity, if you bother to investigate it enough to get the basic concepts right, it is clearly a logically reasonable position, and as far as I can tell, models and predicts reality far better than any other religion or system of philosophy I have encountered in my life to date. Churchianity on the other hand makes even a child recoil from it as absurd, pointless and defeatist, and that, I believe, is the whole nefarious point of it. To try and make Christianity a bland, grey, meaningless fog of platitudes. Which is the exact opposite of what Christianity, the real thing, actually is.

The progression from Atheist to what I am today (an, as yet, unbaptized, Heathen-Catholic-Sede Vacantist) was not exactly gradual but even when I held agnostic views (most of my adult life) it was clear even just from a cursory observation of the facts that Christianity had been the most powerful civilizing force in the History of mankind.

And while all the brainwashed Atheists, secularists, and other cultural Marxists of various stripes begin to rant at their screens in reading that last sentence, I’ll submit that their arguments are invalid if they have, at a minimum, not educated themselves on the historical facts (as opposed to regurgitated Churchian propaganda we all got fed since elementary school) concerning such topics as:

At a minimum, here are some books to cover the above topics in a way that is precise, factual, very well written (so it’s also quite entertaining) and impeccably researched:

The Crusades – by Harold Lamb
Please note similar titles but this author exist, the book I refer to has no other subtitle and was published in 1942 originally. It is historical, not fictional and researched from source documents of both sides of the conflict.

Bearing False Witness: Debunking centuries of anti-Catholic history – by Rodney Stark (who is not a Catholic, interestingly enough)

So, if you wish to disagree with me on the concept that Christianity has been overall the most important factor in the civilizing of the West, do not bother to darken my metaphorical doorway unless you have, at a minimum, read and understood all of the above.

For no honest man can do so and come away still thinking as your average follower of that midwit, Dick Dawkins.