As I write this, it has been about 24 hours since Trump signed the 2,232 page omnibus spending bill that gave his pals Chuck and Nancy everything they wanted.  And in return, all Trump got was what Secretary of Defense Mattis said he had to have to do his job.  It has been speculated by a large number of Trump supporters that Trump signed this monstrosity because he had to have the military funding in place to be in a position of strength for dealing with North Korea.  Which may be true, but we ordinary people have no way of knowing that.
There is no question that this is a horrible spending bill.  Rand Paul went out of the way to make that abundantly clear.  And Trump at his press conference seemed to agree with Rand.  This bill funds the baby killers at Planned Parenthood with taxpayer dollars.  This bill adds to the obscene and unsustainable debt that the US currently holds.  And this bill does not fund The Wall in any meaningful way. 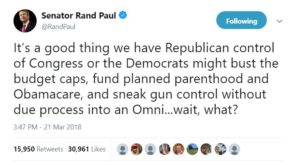 But, even worse than that, it is going to put Trump and the Republicans into a more difficult position come September.  In a year of mid term elections, the GOP is now going to have a budget fight on their hands a month before the election.  And Trump has set down a clear red line, he will veto another disgustingly pork laden spending bill.  Which means that there is almost certainly going to be more “continuing resolutions” which will probably be based on this disastrous porker, or there will be a government shut down, right before the election.
You can say many things about Trump, but he’s clearly willing to go all in.  This is a bold strategy that will either pay huge dividends or will cripple the next 2 years of his presidency.  If the GOP will start working NOW on a real budget, and in turn, be willing to fight the democrats on it, they have the opportunity to inspire their base right before the Congressional elections.  Make the Democrats filibuster for giving taxpayer dollars to baby-killers.  Make them filibuster to stop the wall.  We will see how that works out for them.  At this point, they dare not campaign on DACA, since it was they that torpedoed any DACA deal.  (We do not think that DACA is a good thing.  These people are foreign nationals and should not necessarily be granted citizenship by virtue of merely being here.  The whole concept of DACA is problematic from a Law and Order standpoint, we merely mention it because the Democrats thought that they were going to be able to use it to beat up the Republicans in the upcoming elections.  And yes, we fully realize that expecting shame from a Democrat is about as rational as expecting it to rain gold nuggets).
The only thing we can do is watch and wait and hope that Trump’s big gamble pays off.