Editor’s Note: One of our regular readers has shared some thoughts on the the opportunities before us. We are pleased to welcome The Starving Artist to our ranks of writers.

Opportunity
Noun – “A set of circumstances that makes it possible to do something.”

Grand
Adjective -“Large, ambitious, or impressive in scope or scale.”

A truly grand opportunity has developed.   It is cloaked in cultural shifts, obscured by the mass of information available, and on somedays you have to squint hard to see its outline.  Its magnitude is such that historians will likely be writing volumes of books and articles on its titanic impact upon western civilization, and the radiating shockwaves that proceed out into the rest of the world.
So what is this grand opportunity that I speak of? 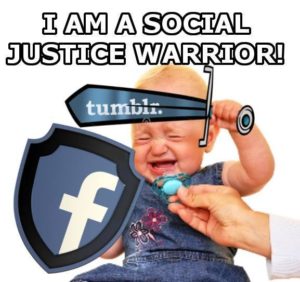 Our intellectual centers of Higher Learning routinely are in the news for their latest forays into the absurd, be it transgender causes, claims that science is oppressive, or childish demands laid at the feet of administrators.   Even worse, the link between the University and the Seminary has ensured that Church in America has also been corrupted and repurposed.  Once the bastion of Western Morality, it now has supplanted Christ with the unvirtuous woman replete with gay female priests that deny God.
America’s economic heart has also been infected with this same disease of Social Justice replacing economic purpose.  Witness the NFL embracing ridiculousness of multimillion dollar athletes protesting their oppression.  Industrial giants such as GE are implementing gender neutrality requirements in each business meanwhile their financial health is currently swirling the drain. Yahoo & Theranos demonstrates the damage that can be wrought on a company by promoting diversity without genuine talent, yet the push for diversity continues despite the cost.
America’s entertainment once a common tie to unite disparate regions of the country, has been corrupted as well.  The rot in Hollywood finally got to the point where even its own moral deprived denizens could no longer tolerate the stench of its evil.  Simultaneously movies, comics, games, and other forms of modern entertainment are fighting to stave off the invasion of Social
Last we even see Americas long standing institutions in the government succumbing.  The military has now fully caught the Social Justice bug, and is reducing standards for entry and training.  At the same time the IRS is still contending with its decision to become an enforcement arm for the Left and just in recently the FBI has revealed it has cast its lot in with that very same.
At this point it would not be unreasonable for most to look at this and despair, or even panic at the loss of a great society going terribly wrong.  It is clear to most that America is in a steep decline, but few acknowledge that this is a cultural death.  But if we do so we miss the truth of the situation.  This steep decline and eventual death is due to the society attempting to embrace contradictions, and the decline and eventual death is the logical outcome.  This cultural death, brings with it a clearing of what once was and fertile space for something else to be put in its place
This is the grand opportunity.  We on the Hard Right need to embrace this to the fullest extent.

Man of the West: Ferdinand Magellan