Some years ago I saw an interview with someone whose name I didn’t bother to record. What I did take down was their statement. This is what was said: 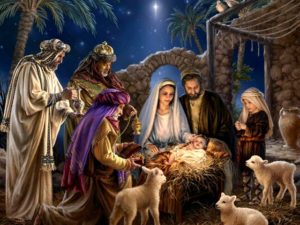 “The Nativity Scene, basically, is an insult to human nature. That we are all doomed and damned and deserving of eternal torment unless we bend our knees before this master in the Lord. What an insult that we are degraded, depraved, human beings. That Jesus created hell.”

In the book of Luke chapter 2 verses 8-11 we are told, “In the same region there were some shepherds staying out in the fields and keeping watch over their flock by night. And an angel of the Lord suddenly stood before them, and the glory of the Lord shone around them; and they were terribly frightened. But the angel said to them, “Do not be afraid; for behold, I bring you good news of great joy which will be for all the people; for today in the city of David there has been born for you a Savior, who is Christ the Lord.”

The shepherds were going about their lives, the daily routines which filled the hours day after day. This particular night watching over the flocks was no different than so many before, when suddenly an angel stood before them and the glory of the Lord shone around them. Their first reaction was fear. Why? A light from nowhere shining all around them. A being standing before them. This is often portrayed as a being in a flowing gown with wings. Why would this frighten the shepherds? Perhaps it is because the angel looked like the one from Numbers 22:31, with sword in its sheath. Perhaps it was the realization of who they are in the light of the Lord. Either reason is a fine topic for another time. What matters is what the angel tells the shepherds. “Do not be afraid.” Easier said than done. The important part again is, why. Why did the angel tell the shepherds not to fear? “I bring you good news of great joy.” Now it is one thing to say, I bring you good news. The question again is, why? Why is the birth of this child good news? Why is the birth of a Savior good news?

If you think that humanity is uncorrupted, blessed, deserving of eternal reward just as we are; that we are all, each and every one, sanctified, unbroken human beings; that heaven is within our grasp, then you can see the birth of a Savior as irrelevant. If however, you recognize in your heart that you are at least a little broken, bent and deserving of punishments for wrongs you have committed, then the reason Jesus created hell is perfectly clear. The need for a Savior to provide a path for you to avoid this punishment you deserve is a welcome word. It is truly good news.

After telling the shepherds where to find the babe, something else happened. Luke 2:13-14 tells us, “And suddenly there appeared with the angel a multitude of the heavenly host praising God and saying, ‘Glory to God in the highest, And on earth peace among men with whom He is pleased.’” Why? Why does this birth bring glory to God?

The Nativity isn’t about punishment, deserved or not. The Nativity is about the path to escape punishment. The Savior isn’t about what is wrong with humanity. It isn’t about what you or I have done wrong to others. The Savior is about what God has done for us. Michelangelo painted God stretching out, reaching out with all He has to touch Adam. This is the same message we should be getting from the Nativity. In order to have a relationship with mankind, the God creator of the universe sent His only son to die for all mankind. The thing is, before one can die, they must first live. The Nativity is the beginning of the final sacrifice that would save humanity for all time. The sacrifice that must be made so that humanity can be in the presence of God.

Peace on Earth. How can that be the case? We all know that peace is certainly not what is happening now. The number of wars throughout history shows that peace is certainly not what the Nativity gave us, right? If however, the peace that is being spoken of is not an earthly peace, but instead it is a peace of spirit, heart and mind, then the peace that transcends all understanding is what is being announced by the angels. A peace that is with you when your circumstances seem unbearable. A sense that you are not alone, even when dreadful things have befallen you or your loved ones. A comfort in the raging storm, a voice that whispers, “I’ve got you, my child.” This is the good news that we who claim the name of Christ as our Lord know to be real. That is the good news which the angels speak of in Luke.

How one views the Nativity says a great deal about that person. If you either do not believe that you are a flawed and broken creature, or you can’t stomach having this pointed out to you, then you will respond negatively to the scene of a Savior coming to earth to redeem mankind. If you can look around you and see the destructive nature of others, and yourself, then you will respond to the Nativity as the beacon of hope that the angels spoke of in that field.

In John 3:17 Jesus tells Nicodemus, “For God did not send the Son into the world to judge the world, but that the world might be saved through Him.” The birth is about hope. It is about redemption. It is about the saving gift of grace offered up by our Heavenly Father. Your perspective on the birth of this child can be seen as a reminder of humanity’s broken and sinful nature. That is not how I believe God sees it. I believe that God sees it as a hopeful sign of great, wonderful and amazing things to come. How do you see it? The choice is yours.

The Battle of Flores