“Be Prepared” is the motto of the Girl Scouts of the USA. While I understand that this organization is a shadow of its former self, this is an excellent motto for anyone to use as an individual, and especially for a Man of the West. With so many natural disasters happening in 2017, perhaps it is a good time to re-examine this “old fashioned” idea. 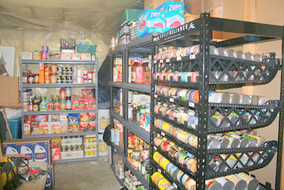 There is a lot of derision directed at the “Prepper Community” in the Main Stream Media. When they did a series for TV, they found the people who talked about things like, space alien invasion, solar flares and I think they even had some folks that warned about “our government turnin’ commie!” I didn’t bother to watch the series after the reviews came out and it was clearly an attempt to make anyone who claimed to be a “prepper” a tin foil hat wearing crazy person. Why?
No, really. What purpose does it serve to make those who appear to be concerned about being prepared for bad things that might happen into “those people you don’t want to be around”? The purpose is simple, and we can see that purpose played out in just the last few months. Let’s start with Harvey, go to Irma, and finally follow up with Maria.
When Harvey was headed to Texas, a variety of things happened. Gov. Abbot declared a state of emergency and all the weather predictors said, “Nothing to see here, it won’t hit Houston.” Corpus Christi was going to be hit directly by a Cat 2 or 3 storm. Nothing much to worry about. The mayor of Houston did not give the order to evacuate. A couple of days later, Harvey skirted Corpus, built up to a Cat 4 and slammed into the surrounding areas and did a lot of damage. Then he went back into the gulf, regrouped, and sat down on Houston for 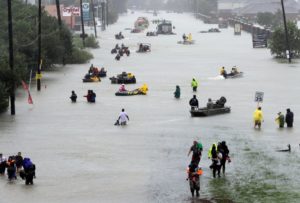 almost a week. The mayor of Dickinson, TX called for “anyone with a boat or lifted vehicle” that wanted to come help with the rescue effort to “please come as quickly as you can.” The Cajun Navy and many individuals swarmed the area and began to help evacuate those who were trapped in their homes.
Irma ripped a path across the Caribbean, beating mercilessly on Puerto Rico, Key West and much of Florida. Thankfully, when people were warned to evacuate the Florida Keys, the people on those islands left and attempted to find a safer location to wait out the storm. The path of the storm was so unpredictable that people as far north as Georgia and South Carolina were being told to evacuate. No major flooding was reported with Irma, but she did a great deal of damage before she quieted down. Maria followed Irma and lashed the islands of the Caribbean once again. This time Puerto Rico got the brunt of her wrath. Power lines were demolished all over the island. Homes and businesses were destroyed. Communications towers and lines were disabled.
Today, Houston is back up and going. She may not be 100% recovered, but within days of being allowed back to their homes, the rebuilding process was up and running. Businesses were opening their doors again. Professional football and baseball games were being played on schedule. Some of the more interesting stories coming out of Houston were the people who’s power did not go out during the storm. The houses were flooded, but lamps were still on, even though submerged in water.
Florida is also back up and going. Professional and college sports are taking place on their normal schedules. Businesses are open, people are in their homes. Life is very much back to normal. Puerto Rico is still without power through much of the island. Communications are down, still. Supplies were pilling up on the docks and not making their way to the people.
Now, let’s revisit the question from earlier, what purpose does it serve to make those who appear to be concerned about being prepared for bad things that might happen into “those people you don’t want to be around”? The purpose, as you can see in the news coverage, is to use these people who are helpless after a natural disaster to further a leftist agenda. The media used the tragedy of Katrina to paint George W. Bush as a bad president who didn’t care about the little guy. They were using Irma and Maria to paint Donald Trump as a bad president who hates brown people. Neither of these spins on the aftermath of the storms is accurate.
The truth is that many people in all these locations had emergency plans in place. They had generators and fuel to run those generators. They had food, water and medicines at hand that they knew they would need if they couldn’t get to the store for a few days. Many had built their homes, businesses, and outbuildings to withstand the hurricanes they knew were probably going to hit them. Yes, even in Puerto Rico there were buildings that withstood both the storms that hammered the island. The people who were prepared do not make the news after a storm. The people who thought ahead, and put a plan in place to prepare for the storms that they knew would one day come, they don’t get to talk to Anderson Cooper and his ilk.  Those people can’t be used as pawns by those who want to make villains of their political enemies. 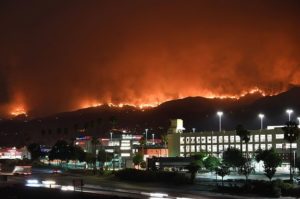 Wildfires west of the Rocky Mountains; Tornados, hail and wind storms throughout the Great Plains; Blizzards in the Great Lakes and Appalachians; Hurricanes from Texas through the gulf up to North Carolina on the east coast.  This is just a quick list of what has been going on in these areas for years.  What can the Men of the West take away from all of this? Simple, be prepared.
If a wildfire threatened your home and family, where would you go? How do you get there? What if your first choice is also threatened by the wildfire? What if your family is not all together? These answers are important to have before something happens.
Look around you and think about your environmental hazards. Anything but a fire, flood or a direct hit by a tornado can be addressed by having extra drinking water, food and a plan for how to prepare it without electricity. Basic ideas about, how would you get home, or to a back up prepared place for safety if you can’t get home. Communicate these things with your family. Get their input on what they are comfortable with doing. It may be better for your wife and younger children to meet you at grandma’s, rather than all of you trying to meet somewhere before going to grandma’s.
If you decide to take up the motto, “Be Prepared”, don’t be surprised if no one jumps on board with you with reckless abandon. It is much, much easier to just assume that things are going to keep on going like they have been.  Don’t fall for this trap. Bad things happen all the time. It is not easy to prepare, sometimes it is expensive to buy that generator and fuel. The alternative may end up being much, much more expensive.
There was a time in our history when we were taught to put a penny away for a rainy day. We were told to be like the Ant, not the Grasshopper in the fairy tale. Today, those ideas are dismissed as out dated, old fashioned, and quaint. The truth is, those ideas still hold true. Mother Nature is still doing what she has been doing for as long as there has been an earth. We would do well, to prepare to be on our own for a few days to a few weeks, or a few months. Ignore those who don’t understand what you are trying to do. God has given Men of the West responsibility for their family.