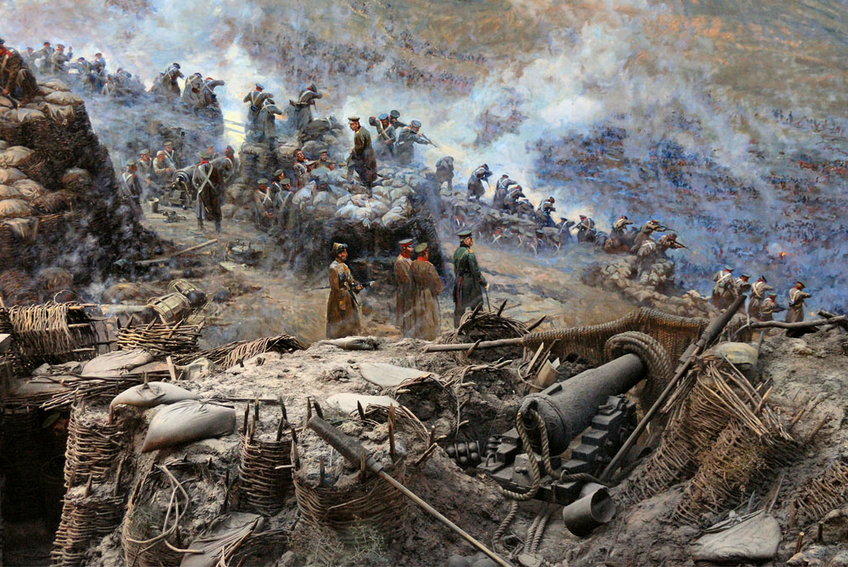 Editor’s note: The following is extracted from Our Soldiers, by W. H. G. Kingston (published 1863). All spelling in the original.

On the 17th of October commenced one of the most extraordinary sieges to be found recounted in the page of modern history. Five bombardments took place; three sanguinary battles were fought under these walls, and numerous sorties and skirmishes occurred. Sixty guns and mortars were landed and brought into position by the British; but the Russians were not idle, and not only was the Malakoff tower strengthened, but the Redan and other formidable batteries were thrown up. The French were on the left, and had fifty-three guns and mortars in position.
At half-past six a.m. on a beautiful morning on the 17th of October, the English and French batteries suddenly opened, completely taking the enemy by surprise; but though the guns from the top of the Malakoff tower were overthrown by the English guns, the Russians kept up a steady fire from the earthen batteries round, and from the Redan and Barrack batteries.
The French siege-guns were, however, of less use, and totally inadequate for the work; consequently at half-past ten a.m. they ceased firing, one of their magazines also having blown up, and killed or wounded 100 men. This undoubtedly was one of the main causes of the failure of the attempt. The fleets at the mouth of the harbour were warmly engaged, and suffered considerably.
The Russians lost Admiral Kermileff, killed, and Admiral Nachimoff, of Sinope celebrity, was wounded, with about 500 men killed and wounded.
The English lost 44 killed, and 266 wounded.
The French were greatly in want of guns, whereas the Russians had the means of increasing their garrison to any extent; and, by sinking their ships, they added 500 to the fortifications and obtained their crews to work them. Sickness and fighting had sadly reduced the English forces, who now numbered only 16,000 men, though the French had still 35,000 fit for service; yet they also soon suffered greatly from sickness and want of food and shelter.
To those who have not before them a plan of Sebastopol, a slight description of the place and the surrounding country will be necessary. It is situated on the south side of an inlet of the sea, with another smaller inlet running up on the east side called Dockyard Creek, and one on the west, some little distance from the intrenchments, called Quarantine Bay. Thus it has water on three sides. Ships of war were stationed in each of the smaller inlets, with their guns bearing on the ravines leading down to them. On the north side of the harbour, at the mouth, was Fort Constantine, with several batteries, and farther inland the Star Fort, while across the harbour’s mouth was a line of powerful ships of war.
Only one side, therefore, remained open to attack. At the commencement of the siege, on the east was a round stone tower, built on commanding ground, and mounting four guns, called the Malakoff, and on the west a crenelated wall terminated by another tower overlooking the Quarantine Harbour; and between them, at one or two intermediate points, there were a few earthworks not completed, and apparently not armed.
Now these defences do not appear to be very formidable, and it is probable that, had the allies left their sick and wounded to the tender mercies of the Cossacks, and pushed on at once after the battle of the Alma, they might have entered the city; but they would have entered a trap in which they would have met certain destruction. The Russian fleet commanding the town would have thundered down on them, and they in their turn would have been subjected to an immediate attack from the powerful Russian forces hastening towards the place. It was therefore decided by the allied chiefs to wait till their siege-trains were landed, and then to lay regular siege to the place.
The river Chernaya ran into the head of the harbour from the east, passing under the heights of Inkerman. A range of hills and high ground extended from its mouth to the town and small harbour of Balaclava, with a broad valley intervening, in which the British cavalry was encamped, with a line of Turkish redoubts in their front, and the village of Kadikoi on their right. On the northern end of this range of heights above Inkerman, the Guards with the 2nd division were posted; while the French, under General Bosquet, were encamped extending along the whole line of heights, till they were terminated by the valley where the cavalry camp was pitched. The other three English divisions faced Sebastopol itself. Balaclava harbour is surrounded by heights, on which some powerful batteries were placed, and only one mountain road led up to them near the sea. Some way below them was the village of Kamara. The weakest points of the position were at the two ends of the long range of heights at Inkerman and Balaclava, and on both these the Russians made their fiercest attacks.
In the valley the only infantry regiment was the gallant 93rd Highlanders, posted in front of the village of Kadikoi.

The enemy had for some days before the 25th of October been observed hovering in the neighbourhood of Balaclava; and on the morning of that day, reinforcements of 20,000 infantry, 40 guns, and a strong force of cavalry arrived, under General Liprandi. The heights above Balaclava were now garrisoned by the marines landed from the fleet; and they, with the 93rd and a few detachments from other regiments, were under the immediate command of Sir Colin Campbell. Early in the morning the Russians, in great force, attacked the Turkish batteries, which they succeeded in capturing,—the English gunner in each, with noble self-devotion, spiking the guns before he attempted to escape. One large body of the enemy now attacked the 93rd, under Lieutenant-Colonel Ainslie, but were bravely repelled. Another, and the most powerful, turned towards the cavalry. As they did so, Lord Lucan ordered General Scarlett to charge, although the ground was far from favourable for the operation. It was the moment every trooper ardently longed for. Nothing could stop their impetuosity; but all descriptions would be tame after that of Mr Russell, for never has there been sketched a more vivid picture. “As lightning flashes through the cloud, the Greys and Enniskilleners passed through the dark masses of the Russians. The shock was but for a moment. There was a clash of steel, and a light play of sword-blades in the air, and then the Greys and the redcoats disappeared in the midst of the shaken and quivering columns. In another moment we saw them emerging with diminished numbers, and in broken order, charging against the second line. It was a terrible moment. ‘God help them, they are lost!’ was the exclamation of more than one man, and the thought of many. With unabated fire the noble hearts dashed at their enemy. It was a fight of heroes. The first lines of Russians, which had been utterly smashed by our charge, and had fled at our flank, and towards the centre, were coming back to swallow up our handful of men. By sheer steel and sheer courage Enniskilleners and Scots were winning their desperate way right through the enemy’s squadron, and already grey horses and redcoats had appeared right at the rear of the second mass, when, with irresistible force, like one bolt from a bow, the 4th Dragoon Guards, riding straight at the right flank of the Russians, and the 5th Dragoon Guards, following close upon the Enniskilleners, rushed at the remnant of the first line of the enemy, went through it as though it were made of pasteboard, and put them to utter rout. The Russian horse, in less than five minutes after it met our dragoons, was flying with all its speed before a force certainly not half its strength. A cheer burst from every lip. In their enthusiasm, officers and men took off their caps, and shouted with delight, and then, keeping up the scenic character of their position, they clapped their hands again and again. Lord Raglan at once despatched Lieutenant Curzon, his aide-de-camp, to convey his congratulations to Brigadier-General Scarlett, and to say, ‘Well done!’”
We may suppose the heights overlooking the plain or valley crowded with eager spectators—the enemy below—the Russian hosts beyond.
This was not that desperate charge known as the “Balaclava Charge,” which took place soon afterwards.
(Go back to previous chapter)
(Continue to next chapter)