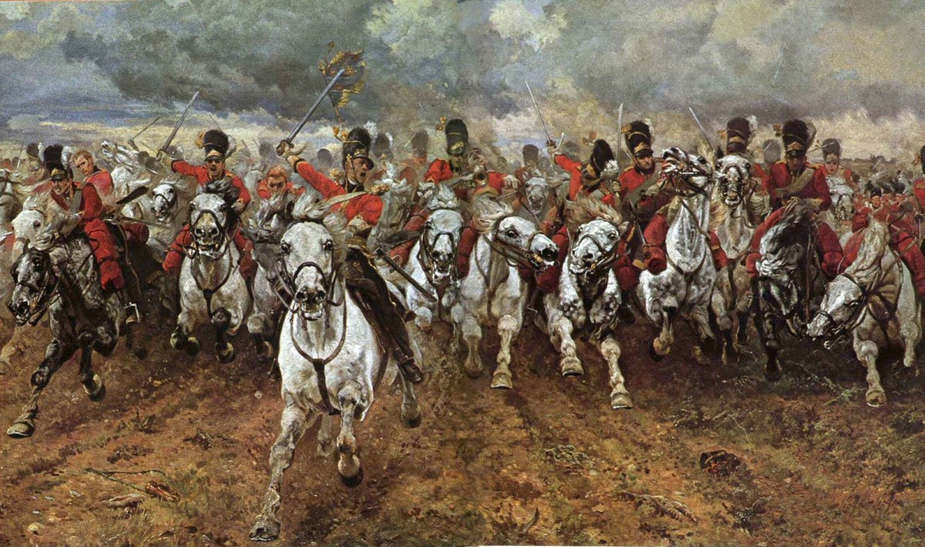 Editor’s note: The following is extracted from Our Soldiers, by W. H. G. Kingston (published 1863). All spelling in the original.

The Charge of the Light Brigade

That the reader may understand the circumstances which led to that terrible charge, a description of the ground must be given.
From the lofty plateau of the Chersonese, on which the British army was posted, a long ridge of elevated ground extends to the eastward, on the top of which runs the Woronzoff road. Along this ridge was a line of forts armed with carriage guns, which had just before been captured by the Russians from the Turks who had garrisoned them. To the south was the broad valley, with the heights of Balaclava on the farther side, in which the charge of the heavy cavalry, under General Scarlett, took place. On the north side of the ridge was a narrower valley, with the Fedhoukine hills to the north. 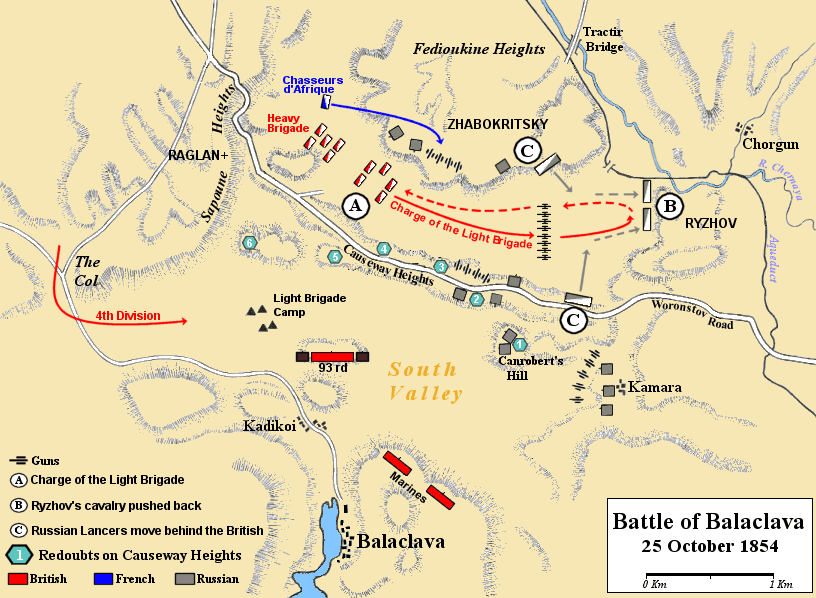 It was towards the latter part of that memorable day, the 25th of October, that the British cavalry were drawn up under Lord Lucan at the western end of this narrow valley directly under the steep heights of the Chersonese. On the summit, at the very edge of the heights, Lord Raglan with General Airey and other officers had taken their post, so as to overlook the Woronzoff ridge and the Fedhoukine hills with the whole of the intermediate valley. The eastern end of the valley was occupied by some powerful batteries of Russian guns, supported by large bodies of cavalry and several regiments of infantry, while the heights on both sides were crowned by Russian artillery and infantry. Lord Raglan, perceiving that it was the intention of the Russians to carry off the guns they had captured from the Turks, ordered up General Cathcart’s brigade to prevent them from effecting their object. Some delay occurred before the brigade began its march; and the Commander-in-Chief, seeing that the Russians would succeed in carrying off the guns if not at once attacked, despatched Captain Nolan, an officer on General Airey’s staff, with a written order to Lord Lucan to charge the Russians with the light brigade of cavalry commanded by Lord Cardigan, and to recapture the guns. Lord Lucan and Lord Cardigan saw only the heavy guns in their front—those to which Lord Raglan referred being concealed from their view by the high ground. They, therefore, supposing that they were to attack the guns which they did see, naturally demurred about performing an act which might prove the destruction of the whole brigade, while the aide-de-camp, who thought only of the guns on their right, insisted in strong language that the order must be obeyed. Supposing that the order was understood, Captain Nolan then placed himself on the left of the light brigade, intending to charge with it. Lord Cardigan, still under a wrong impression, obedient to the order which he conceived had been sent him, placed himself at the head of his gallant light cavalry, and gave the order to advance. Instead of wheeling with their left shoulders forward towards the slope on their right front, as the Commander-in-Chief expected them to do, the cavalry continued straight down the valley, Lord Cardigan, on his tall charger, at a distance of some five horses’ lengths in front of the line, leading them.
Scarcely had they gone a hundred paces when Captain Nolan, dashing out from the left of the line, galloped diagonally across the front, waving his sword and pointing eagerly towards the Russians on the right. There might yet have been time to remedy the fatal error into which the cavalry guards had fallen, but at that moment a shell burst close to the brave aide-de-camp. His sword fell from his hand, while his arm still remained extended; his horse wheeling, dashed back towards the advancing ranks, passing between the 13th Light Dragoons, and he fell to the ground a lifeless corpse.
Steadily on went those 600 men, almost to certain death, a perfect marvel of discipline and heroic courage. From the Woronzoff heights on the right, from the Fedhoukine hills on the left, came showering down upon them shot and shell and rifle bullets, thinning their advancing ranks. Each gap made by the deadly missiles was immediately filled up. On went the devoted band. More and more dropped. Riderless horses galloped back, some falling in their course, others uttering cries of agony from the wounds they had received. Here and there human forms could be distinguished lying in the quiet of death, others writhing on the ground, or endeavouring to drag themselves back up the valley. As the brigade, still as steady as if on parade, dashed forward, the guns in their front opened their fire, filling the air with dense masses of smoke. Right up to them they charged, Lord Cardigan still leading. Amid the guns they forced their way, cutting down the gunners, who either fled or endeavoured to find shelter under the carriages. 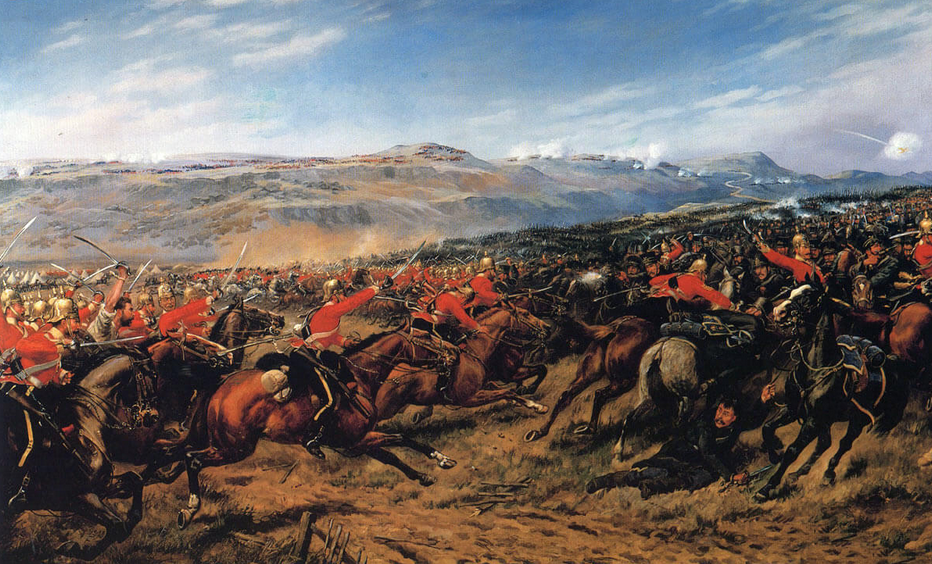 Lord Lucan, in the meantime, followed with the heavy cavalry to support the light brigade, but having lost many men, he judiciously retired, at once seeing that his brigade would be destroyed before they could even reach the guns, and they were now compelled to remain inactive while the action continued, as their brethren in the light cavalry had been in the morning. At this juncture a portion of the French cavalry—the famous regiment of D’Allonville—moved forward, sweeping round the western base of the Fedhoukine hills, up which they charged, rushing forward as fast as the uneven nature of the ground would allow them, on the Russian artillery and infantry posted there, and which had caused such fearful loss to the light cavalry as they passed. As the French approached, the artillery limbered up and galloped off to the eastward, while the infantry quickly retreated, although not until many a gallant Frenchman’s saddle had been emptied. Some minutes of awful suspense had passed since the last of the red line of cavalry had been seen rushing into the smoke. Those posted on the height of Chersonese could discern, as the smoke cleared away, a dark mass in the distance, and the glittering of sword-blades, while the sounds of musketry and the confused murmur of voices which came up the valley indicated that the fight was still raging. The guns which had dealt death into their ranks had ceased to roar. They had fought their way through, attacked, and put to flight the Russian cavalry. Then breaking into several bodies, after enduring a heavy fire from the rifles of the infantry, had wheeled round and were making their way back towards the point from which a few minutes before they had set forth in brilliant array. One body had to encounter a whole regiment of lancers drawn up on their flank. Although the Russians thrust at them with their long spears, every blow was parried, and they passed by unscathed. At length, here and there a single horseman was seen moving slowly back, he or his charger sorely wounded. Now more and more appeared, several dropping as they returned, the whole centre of the valley, as far as the eye could reach, being strewed with bodies of men and horses. The number of those coming up the valley now increased. Among them appeared the tall form of their leader, he and his horse uninjured; then came larger parties, followed by single horses and men on foot, still exposed to the fire from the Woronzoff ridge. Presently a number of Cossacks came galloping up after the retreating cavalry, spearing some, and taking others prisoners; but the Russian guns on the causeway again opening fire, the Cossacks, to avoid being struck by their friends, were compelled to abandon the pursuit, many of those they had surrounded making their escape. Among the last who came in was Lord George Paget, who with Colonel Douglas led out the remnant of the 4th Dragoon Guards and a portion of the 11th Hussars. Of the Gallant Brigade, which half an hour before had numbered 600 horseman, not 200 now remained fit for duty. 113 officers and men had been killed, and 134 wounded, while upwards of 400 horses were killed or rendered unfit for service. Although the Russian batteries still kept up their fire, many of the troopers who had themselves escaped dashed back to search for their wounded officers or comrades, and several were thus saved from perishing on the battle-field.
The Russian loss was far greater. Sir George Cathcart, with the 4th division, coming up, the enemy fell back, and abandoned the attempt to carry off the guns. On the next day, the 26th of October, the Russians made an attack on the 2nd division, that part of the British force which was posted above the ruins of Inkerman.
About 8000 men, supported by artillery and skirmishers, advanced against this division; but so admirably did they sustain the attack, that when General Bosquet led up some French troops, they retreated, and were chased down the ridge towards the head of the bay. This attack has been called the Little Inkerman. 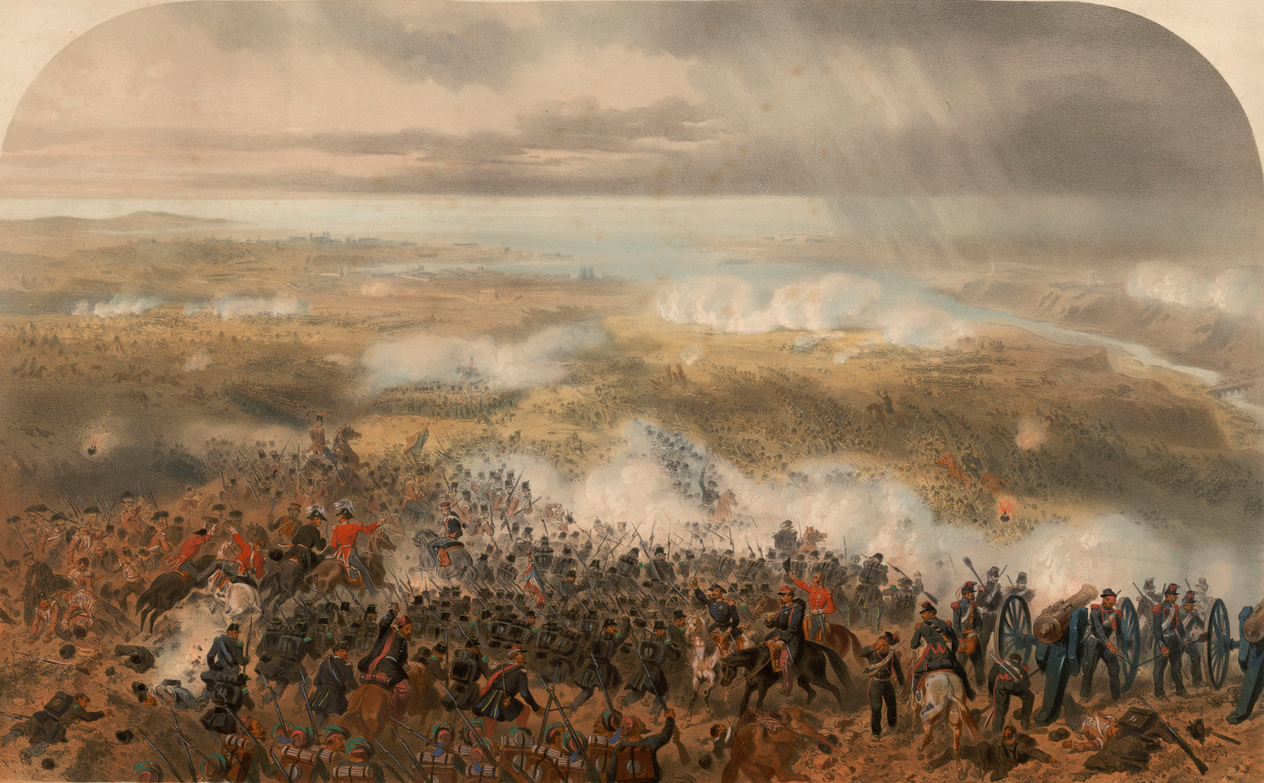 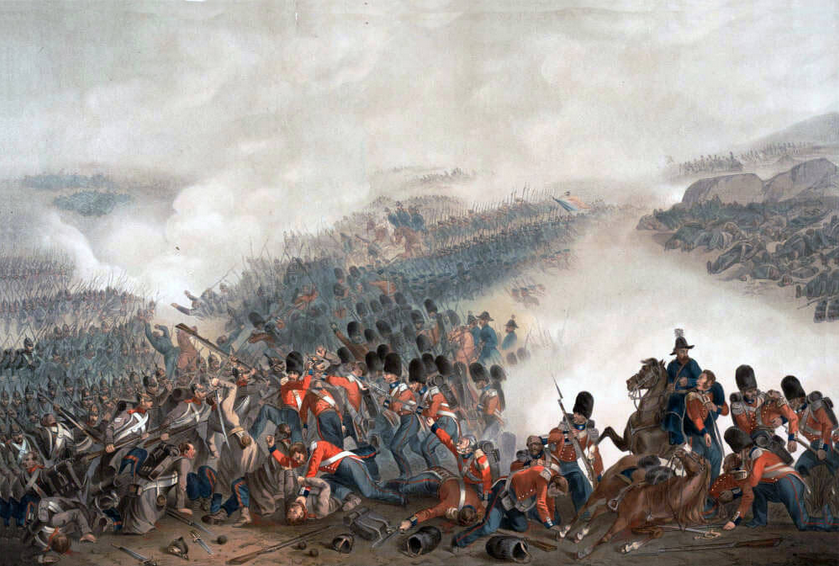 The conduct of the English infantry is immortal. Although enfeebled by previous fatigue and constant night watches, still, on the day of trial, for hours did 8000 men resolutely maintain themselves against successive columns of attack of vastly superior numbers; and at last, when almost overpowered, they found an ever ready and gallant ally at hand to save them in their hour of need.
This battle, too, brought out conspicuously the sterling courage and unmatched steadiness of the English artillery. Repeatedly were the Russian columns close to the muzzles of the guns, and were driven back by volleys of case. In some instances the batteries were actually run into, and the gunners bayoneted at their posts. Their carriages were repeatedly struck, and their loss was 96 men and 80 horses killed. 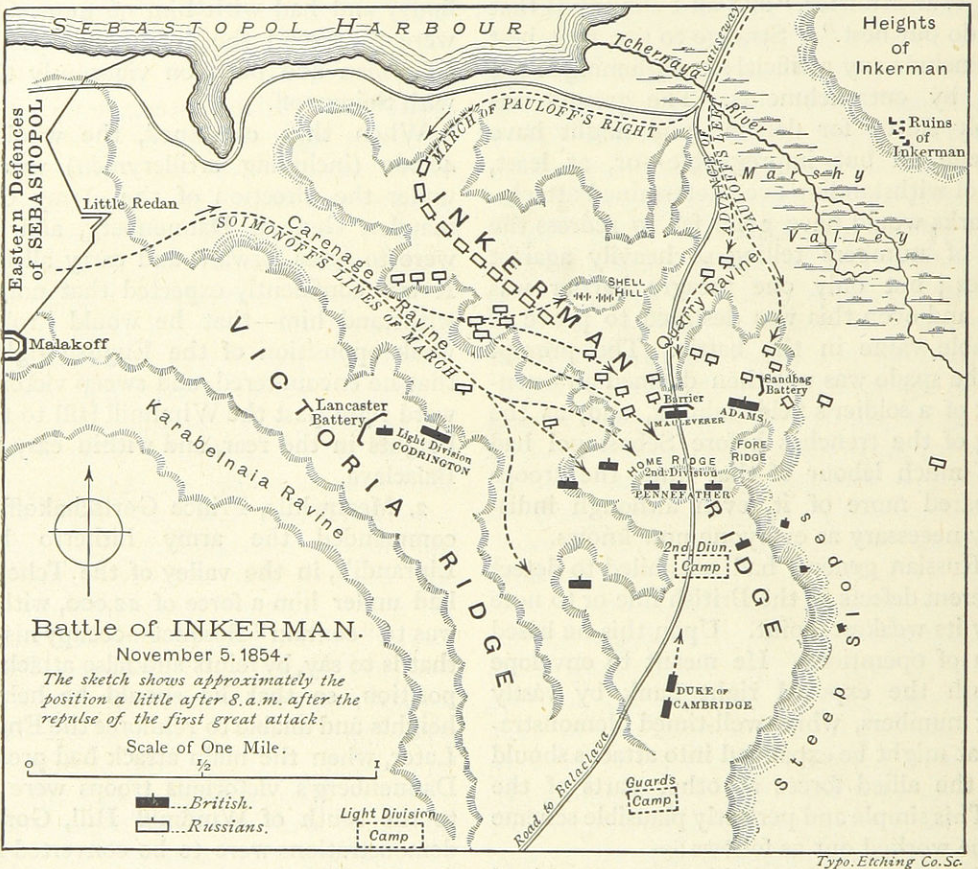 The casualties of the British army amounted to 2590. Of these, 43 officers and 416 men were killed, and 101 officers and 1332 men were wounded, while nearly 200 were missing. The Russians lost fully 15,000 men.
That of the 25,000 British infantry landed in the Crimea, only 8000 should have been forthcoming to take part in the battle, may seem surprising; but so it was. Three thousand had been killed, 5000 were sick, 3000 were in the trenches, and 6000 of the 3rd division were at Balaclava. Of those present, the Guards had 1300; 2nd division, 2500; light division, 2000; and 4th division, 2200.
And now let us do justice to the memory of as gallant a soldier as ever led the armies of Old England to victory, by looking at the difficulties by which Lord Raglan was surrounded.
Of his already diminished numbers, 2500 men were lying on the field of battle—eight of his generals had fallen—the hospitals were full—cholera was in his camp—no recruits were coming—winter had arrived—the men had no shelter—no transport to bring them food—no clothing, for the Prince, with 40,000 greatcoats, and stores of all sorts, had gone down. Never did an army with more heroic courage and endurance persevere to finally conquer, though its brave General sank under the load of anxiety pressed on him, and the unjust accusations brought against his fame.
(Go back to previous chapter)
(Continue to next chapter)