“But about that day or hour no one knows, not even the angels in heaven, nor the Son but only the Father. As it was in the days of Noah, so it will be at the coming of the Son of Man. For in the days before the flood, people were eating and drinking, marrying and giving in marriage, up to the day Noah entered the ark …” (cf. Matthew 24:36-38)

From time out of mind people have speculated about the end of the world, when it will take place and what it will look like. Many look to celestial events such as blood red moons and solar eclipses as clear signs that the end is near.  Even as recently as this last month, when we experienced a rare solar eclipse that captivated large numbers of people, there were some who thought it may be a dire harbinger of things to come.
That’s all fine and good, and the Bible certainly speaks of signs in the heavens which portend the winding up of this age and the dawn of an eternity to be ushered in by the Messiah. But that is not all. When Jesus was asked a question about the circumstances surrounding His return, he answered with the words in the passage quoted above in Matthew 24. He indicated that the time of His coming would be likened to the “days of Noah.”
That being said, perhaps it would behoove us to consider what characterized the days of Noah just before the flood. If we were to look back in Genesis, we would discover that two primary elements characterized the days of Noah: (1) the earth was corrupt before God’s countenance and (2) filled with wrongdoing, sometimes translated violence or robbery.
Let’s begin with the idea that the earth was corrupt. In Hebrew, the root word for corrupt is shachet and denotes ruin in the sense of corruption rather than destruction. It is that which ruins an otherwise healthy and sound condition. In other words, shachet impedes the progress of something that it is intended to flourish, something that transforms success into failure. The most basic meaning of shachet is “a pit.” 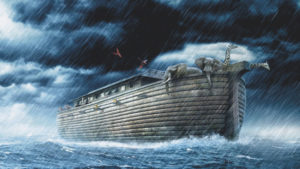 One who digs this kind of pit, however, does so for evil and not for good – his intention is to place an obstacle in the path of someone to prevent him from reaching his destination, hoping to bring him to ruin. Shachet is related to shached, the root word for a bribe. The idea is that a bribe ‘digs a pit’ in the path of a judge who is on his way or on the path to delivering a just verdict, but the bribe blinds him, stops him in his path, and prevents him from reaching his goal by placing a stumbling block before him.
And so, the idea is that the whole earth was corrupt before God and that people were digging pits and placing stumbling blocks in the paths of one another, because their primary objective was to bring others to ruin. Their only goal was to ruin and destroy that which was healthy and sound, that which was flourishing. Their main objective was to turn the success of others into failure and to prevent those who were on the path of righteousness from ever reaching their destination by impeding their progress.
But this is only half the story. The text also says that the earth was not only corrupt before the Lord, but filled with wrongdoing or violence. The word in Hebrew, rendered robbery or violence in most standard translations, is quite fascinating and suggestive. The word is hamas.
Hamas is a form of robbery which cannot be recovered through legal proceedings. One who perpetrates hamas is not penalized by any human court; if left unchecked and perpetrated over and over again, hamas gradually leads to the ruin of one’s fellow man. A couple of examples which serve to illustrate its usage in other passages:
When a vine sheds unripe grapes, it is said to have committed hamas against the fruit, since the hamas is not committed all at once; but instead, the fruit’s drawing of sustenance from the vine is slowly but surely stopped, until the fruit finally drops off (cf. Job 15:33). A similar verse in Lamentations 2:6 describes the relationship between a garden and its hedges, where the pressure of the garden’s growth causes the hedges to wither, slowly over time. Interestingly, hamas is also related to vinegar, since wine does not sour all at once, but gradually and over time as well.
And so, according to the text, moral corruption comes first, sins about which society is not too concerned. Even though married life deteriorates and the young behave disrespectfully, etc. people in a society are wont to think that life can proceed as it always has; that trade and commerce will continue to flourish, and that business relationships will remain honest. What most people fail to realize and understand, however, is that once the world is corrupt before God Himself, all the laws and institutions in the world will not be able to preserve society from the ruin it is determind to bring upon itself.
The world may withstand outright robbery and the penal codes and prison terms may help a society protect itself from such crimes, but hamas – wrongdoing that is facilitated by cunning – will eventually bring a society to its knees and utterly destroy it. It’s the proverbial death by a thousand cuts, as it were. The idea is that there can be no protection against hamas when a man’s conscience is no longer admonishing him before God. For it is moral corruption which eventually destroys a man’s conscience.
Things that were once considered sin to a man are no longer considered transgressions worthy of condemnation, but have morphed into virtues to be celebrated and championed in a so-called progressive society that is corrupt before God and filled with hamas. The welfare of a society is destroyed in the wake of wrongdoing which has been facilitated by cunning i.e. hamas. On account of hamas, a society is going to sour and decay.
It is at this juncture which God declares:

So God said to Noah, “I am going to put an end to all people, for the earth is filled with violence because of them. I am surely going to destroy both them and the earth (cf. Genesis 6:13)

The sense in the Hebrew is that if God does not intervene, the end will come of its own accord. In other words, if the present state is allowed to continue, mankind has no future; destruction is therefore necessary, destruction not for the sake of annihilation, but destruction for the sake of salvation.
How did we arrive where we are today? Gradually, slowly, over time, one compromise at a time. Are we not witnessing hamas that is filling the earth more and more as the Day approaches? Have we ever witnessed a time in our history when so many are so virulently committed to bringing ruin to their fellowman and busier than ever digging pits and setting stumbling blocks in the path of everyone who gets in their way or opposes their nefarious agendas?
How has homosexuality and transgenderism frenetically achieved the exalted status that it has in our society and with such alacrity? Has it not been facilitated by cunning? Has this agenda not been piped into our living rooms through popular culture, movies, television and so-called social media? Have these lifestyle choices not been enshrined in our labor and anti-discrimination laws?
Has this deviant and abominable agenda not been perpetuated in our schools so that the very young, under the influence of authority figures whom they respect and admire, will grow up with perversity being repackaged and presented to them as the new normal, while enjoying immunity from the condemnation it deserves, even though we all instinctively know these things to be inherently wrong?
Are not groups such as Antifa and other various denominations of so-called social justice warriors from the SPLC and the ACLU to the ADL committing wrongdoing against society that is facilitated by cunning? As we watch monuments destroyed in the name of stamping out racism and the black stain of slavery, are we not witnessing wrongdoing facilitated by cunning which is meant to divert our attention from the real agenda that is afoot? From transgenders serving in the military to tolerating people who are openly and avowedly committed to our destruction, to guarding and policing our speech with everyone we meet, whether in person or in cyberspace, for fear of offending the so-called sensibilities of someone, anyone, and everyone, are we not impeding all that God intended to flourish in a free society?
In one sense it can be quite discouraging and disheartening, yet in another sense it is quite exciting and even comforting: these are clear signs that His coming is nigh and with it our final redemption; confirmation that His words are trustworthy and true; that God will, on a Day known only to Himself, intervene once again and once and for all so that we will not be remembered as the authors of our own destruction. It will be as in the days of Noah, whose name in Hebrew means comfort, for he was a righteous and upright man, a preacher of righteousness who comforted his generation.
Noah managed to walk with God amidst the changing generations, when moral corruption and hamas were trending. Foregoing the companionship of those who mocked and ridiculed him, Noah remained committed to God and held fast to Him and bequeathed to mankind a new future. I think I speak for everyone here when I say that this is exactly the primary purpose of the Men of the West, to live and act in such a way that provides a new future for mankind, a future that is incorruptible and marked by every man speaking the truth to his neighbor, rather than leading his neighbor to ruin at every opportunity.
The Scriptures say that Noah found favor in God’s eyes and this means that Noah had reached the highest perfection a man could reach in the eyes of God. In these times, can we afford to strive for anything less? Do we dare strive for anything less? We find ourselves living in treacherous times that are only growing more and more treacherous as the Day approaches. May God preserve us and strengthen us to overcome the challenges we will face and are facing even now. Let us get our spiritual houses in order today, this very minute, may we not put it off until tomorrow, because if we are really honest with ourselves, tomorrow never comes.

Therefore, since we are surrounded by such a great cloud of witnesses, let us throw off everything that hinders and the sin that so easily entangles. And let us run with perseverance the race marked out for us, fixing our eyes on the Messiah, the author and perfecter of faith.
For the joy set before him he endured the tree, scorning its shame, and sat down at the right hand of the throne of God.  Consider Him who endured such opposition from sinners, so that you will not grow weary and lose heart (cf. Hebrews 12:1-2).

A Prayer For Those in Harm's Way in Texas, and, shortly, in North Carolina