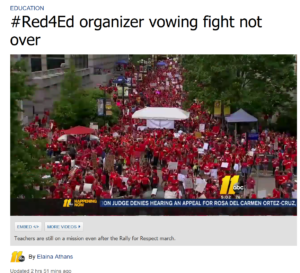 This past Wednesday, the North Carolina Association of Educators staged a rally for the opening day of the North Carolina General Assembly.  They published a list of demands, and I think we should go through them.   The following list of demands is taken from their official webpage May16.org under the Frequently Asked Questions section.  (here is the archive.is saved version in the event that the page is removed)

Increase per-student spending, which is currently 39th in the nation and about $2,400 less than the national average.

So, I’ve seen a couple of variations of this one, this one focuses on “per student” spending.  There’s also a similar one about teacher pay.   All of them are in the high 30’s though.  Notice the way that this is phrased, using the National Average as a point of comparison.  That doesn’t take into account the income of the people in the state or the tax revenues that the state takes in.  North Carolina is presently ranked 41st in Median Household Income and 34th in Per Capita income.  What this means is that being ranked 39th in spending on something is pretty well in line with the amount of money the citizenry of North Carolina is making.  You can certainly make the case that there should be more spending, but unless the average person’s take home pay is going to jump up to the national average (which according to the linked table is sitting between position 20 and 21) you’re not going to get very far.  In fact, the pay scale that is already in the North Carolina budget is already pushing teacher pay rates up through the year 2020.   So I think this demand is disingenuous at best.

Increase pay for educators with a plan to get to the national average and immediate across the board pay raises for all state employees. This can be paid for by repealing an upcoming corporate tax break.

We have just discussed why the “national average” is a disingenuous number to use.  And considering that teacher salaries are a part of per student spending, we have a little bit of a redundant demand.  We also have the teachers demanding a pay hike for all state employees and the cancellation of what they refer to as a “corporate tax break”, which is in and of itself a lie.  The actual tax changes lower both personal and corporate taxes (I suppose the teachers may merely wish to cancel the corporate part of the tax adjustment, but that’s unclear in their demand).  The political left has been foaming at the mouth since the GOP took over and instituted tax reform.  Unfortunately for them, they also significantly increased education spending when they did so.  The tax reform has greatly benefited the North Carolina economy to the point that the Democrats were reduced in the last election cycle to picking fights over letting men into the women’s bathrooms.  My conclusion: this is redundant where it relates to education and irrelevant past that.  The demand to cancel the changes to the tax code is partisan hackery at its worst.

This is three demands in one, so let’s break it down into 3 responses. 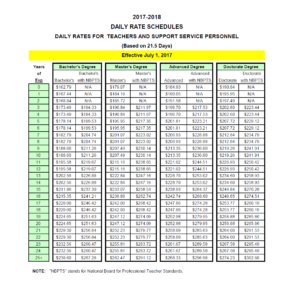 Freeze any increases in health care costs for public employees, which requires no additional resources from the state.

This one is pretty straightforward.  Everybody has seen their health care costs rise, courtesy of Obamacare.  In North Carolina, teachers are on the state health plan, so they get the same coverage as the other state employees.  And the taxpayer also has a stake here.  It is not fair to expect the average taxpayer to shoulder his rising healthcare costs and the rising healthcare costs of all government employees.  Employer provided health care is a part of the overall compensation package, and this is basically just another demand for more money.  And we have already pointed out above that the teachers in North Carolina are being paid basically in line with the amount of money the taxpaying citizens bring in and pay taxes on.  So there’s no compelling case here to adjust their compensation package in a significant way.

Aside from being a budget buster on the state level, this has absolutely nothing to do with education, teacher pay, or why the teachers were supposedly rallying.  But why should a group of socialists ever give up an opportunity to meddle in people’s health care?

Stop the attacks on public schools by placing a moratorium on new charter schools and private school vouchers.

And here we go, charter schools and school vouchers are “attacks” on public schools.  Charter schools and school vouchers have become necessary squarely because the Supreme Court of the United States prohibited the Bible and banned prayer from public schools.  Frankly, the religious should not be taxed in order to finance the dens of atheism that the public schools have become.  As long as these Supreme Court rulings stand, along with God only knows how many rules from the Department of Education and threats of litigation from the perpetually offended, there is simply no way to fix the problems in the public schools other than to fund charter schools and allow school choice programs.  It is merely an unfortunate reality.  If teachers want reform, they should start by focusing their ire on the authors of these disasters, many of whom presently work for the groups that organized this rally.
All that being said, it is still the official policy of The Men of the West to Homeschool or Die.  Nobody other than God Himself loves your kids more than you do.   You shouldn’t outsource their education to a bunch of purveyors of Marx’s Labor Theory of Value.

The Story of the Malakand Field Force (Part 12)

Hymn: All To Jesus I Surrender