“You cannot be civil with a political party that wants to destroy what you stand for, what you care about,” Clinton told CNN’s Christiane Amanpour. “That’s why I believe, if we are fortunate enough to win back the House and or the Senate, that’s when civility can start again.”

On Thursday, October 11, 2018, Bleeding Cool News published an interview with Vox Day that was very well researched and probably the most fair interview that has been done with the man in years.  The article was written by Mark Seifert, who was one of the founders of Bleeding Cool.  Unfortunately, you can no longer read this article at Bleeding Cool News’ site, as it has been taken down in a fit of SJW rage and replaced with a smarmy apology.

Fortunately, you can still read the original article courtesy of the fine folks at archive.today.  And I suggest you do.  Despite the fact that Seifert clearly doesn’t agree with Vox, he asked fair questions and reported Vox’s answers accurately.  This is better journalism than 95% of the media outlets out there.  And certainly better than Amanda Robb’s hackery.  And what did Mr. Seifert get for his trouble?  Apparently, a coup.

In a first step towards that end we are announcing, effective immediately, I am stepping into the role of Editor-in-Chief and will be implementing new review policies across the Bleeding Cool teams. Yesterday an extensive interview was run with publisher, author, and political figure Vox Day.
-Kaitlyn Booth “An Apology Concerning Vox Day: We Made a Mistake” October 11, 2018

If one cannot even run an article with professional civility with those you disagree with, how do you expect to share a world, a country, a state, or a city with them?  It is clear that there is certainly 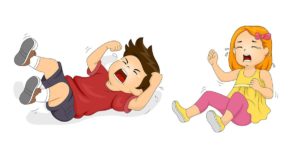 a lack of civility in politics and in the culture.  But fortunately, the Kaitlyn Booths and Hillary Clintons of the world have made it perfectly clear which side lacks civility.  And it isn’t the Hard Right.  It’s the riotous, insane, left who cannot even tolerate an interview with someone whose opinions they disagree with.
At the end of the day, the only thing this has changed is this article.  Before the retraction, this article was going to be one comparing and contrasting Mr. Seifert’s work with what Amanda Robb did and strike a hopeful tone that maybe we could somehow make it back to the days when you could disagree with somebody and still remain civil.  However, they have simply confirmed what we already knew.  There is no peacefully co-existing with these maniacs.  Which is why the more Trump offends them, and the more they shriek, the better off the world will be.

How A Poor Man Raced With The Emperor's Daughter