Editor’s Note: From Hoosier Hillbilly: From the same collection as before. Even the medieval writers were not above swiping from previous sources, as this is only a very slight variation on the Greek story of Atalanta. But, as was the wont of the Medieval writers, Christian morality was grafted into the story and gives us the tale below.

How a Poor Man Raced with the Emperor’s Daughter
Pompeius was a wise Emperor reigning in the city of Rome, who had a fair daughter names Aglaes, and she had two virtues over all other maidens. The first was, she was fair of face and pleasant to the eye of men; the second was, she was so nimble of foot that no man might run with her for a great space but that she would come to the mark long before him. When the Emperor saw these two virtues in his daughter, he rejoiced and was glad in all his heart; and he made a proclamation in all that land, that whosoever would run with his daughter and come to the mark before her, he should wed her with infinite goods; and if there were any that would proffer himself to run with her and might not win over her, he should lose his head. Therefore lords of estate, dukes, barons, and knights came thick and offered to run with her, but there was no one who might hold foot with her; therefore each one for his failing lost his head, as the law was.
Now there was in the city a poor man, who thought to himself, “I am poor, and come of low kindred; and a common cry is made that if any man might by skill or sleight pass in running the daughter of the Emperor, he should wed her, and be greatly advanced. And therefore, if such a poor fellow as I might overcome her by cunning, whereby I and all my kin might be raised and honored, truly it were a good turn.”

Then went he forth and provided him with three cunning devices: a seemly garland of red roses, in royal array; the second device a silken girdle, subtly made, for the damsel really loved such fantasies; the third a subtle purse made of silk, adorned with precious stones, and in the purse was a ball of three colors, and it had a superscription that said thus, Qui mecum ludit, nunquam de meo ludo satiabitur, which is to say, “He that playeth with me shall never have enough of my play.” He put up in his bosom these three toys, and went to the gate of the palace, and cried and said, “Come, fair damsel, I am ready to run with thee and to fulfill the law in all points.”
And when these words were carried to the Emperor, he commanded his daughter to run with him. The damsel looked out of the window, for to see him; and when she had seen him, she defied him I her heart, and said to herself, “Alas! That I who have overcome so many noble men, should now run with such a churl’s son as thou art; nevertheless I must fulfill the will of my father.”
She went and made her ready to run with him, and she came to him and both stood together for to begin to run. And when they had run a while, the maid had run before him a great way. When the other saw that, he cast before her the fair garland; and as soon as she saw the fair garland before her, then she turned and took it up and set it on her head and made such great delight in it, that the other ran before her. When she saw that, she wept bitterly and in great wrath cast away the garland, and ran and overtook him. And as soon as she was by him, she took up her hand and gave him a great buffet on the cheek and said, “Ignorant wretch, well beseemeth thy sire’s son to wed me!” And she ran on far before.
And when he saw that, he took out the girdle and again in the same manner cast it in front of her; and as soon as she had a sight of it, she bowed down and took it up and girt her therewith; and she had such great pleasure therein that she stopped running, and by that time he was far before her. When she cast up her eyes and saw him, she made great lamentation, and took the girdle in anger and bit it with her teeth in three parts; and she ran again with all the might that was in her and overtook him, and gave him a great buffet and ran from him and said, “What, rascal, thinkest thou to overcome me?”
That other one was wily and would not cast the purse until the time that he came near the mark; and then he cast the purse, as he did the other thing. And then she stopped again and took it up and opened it and took out the ball and read the superscription. And then she began to play with the ball so long, that the trickster was before her at the mark. And then she made great lamentation; and he wedded her and head great riches, as the law decreed.
Morality
Dear friends, this Emperor is out Lord Jesus Christ; the fair daughter is the soul of man, made like Himself, and cleansed from original sin by baptism; and it is swift in running, while it is in innocence, and is so swift that no deadly sins may overcome her; and so they lose their heads or their power, when they cannot overcome her.
The poor man, who thought up these devices, is the Devil, who studies night and day to overcome innocence; and therefore he provideth him with three devices, the first a garland. By the garland we may understand pride and for this reason, for the garland is not set on the arm, nor in any other part of the body. It is set upon the head, because it should be seen. In the same wise will the proud man be seen and spread his fringes; and therefore saith Augustine, Cum superbum videris, filium diaboli esse non dubites. This is to say “When thou seest a proud man, doubt not thou seest the son of the Devil.” Therefore when the Devil casteth this garland of pride in thy eyes, weep, as did the damsel; and do off that garland of pride and cast it in the ditch of contrition, and so shalt thou give the Devil a buffet and overcome him.
Then when the Devil seeth that he is overcome, he tempteth a man in another sin, and casteth before him a girdle of lechery; of which kind of girdle saith Gregory, Cingite lumbos vestros in 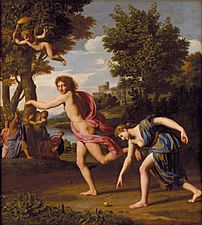 castitate. This is to say, “Gird your loins in chastity.” For whosoever is girt with the girdle of lechery, certainly he leaveth the running of the good life and is overcome of the Devil. As the Apostle saith, Nullum opus bonum sine castitate. This is to say, “There is no good work without chastity.” And therefore do as she did; smite the girdle in three (with prayer, fasting, and almsdeed), and without doubt, then shalt thou overcome the Devil.
After this the Devil casteth forth a purse with a ball. What is that? Ye know well a purse is open above and shut beneath, and betokeneth the heart of man that should ever be open to heavenly things and shut to earthly things. The two cords that serve to open and to shut the purse, signify the love of God and of thy neighbor; the ball that is round and colored so diversely betokeneth the vice of covetousness that moveth in the old as in the young; and therefore the saying that is written above is true, where it is said, Qui mecum ludit, nunquam satiabitur; for the covetous man can never be filled.
And therefore let us beware that we play not with the ball of covetousness, as she did; for if we forsake God and give ourselves to transitory things and vanities, truly we shall never then come to the glory of everlasting life.

Video: Eat Keto On A Budget

The Demise of Civility