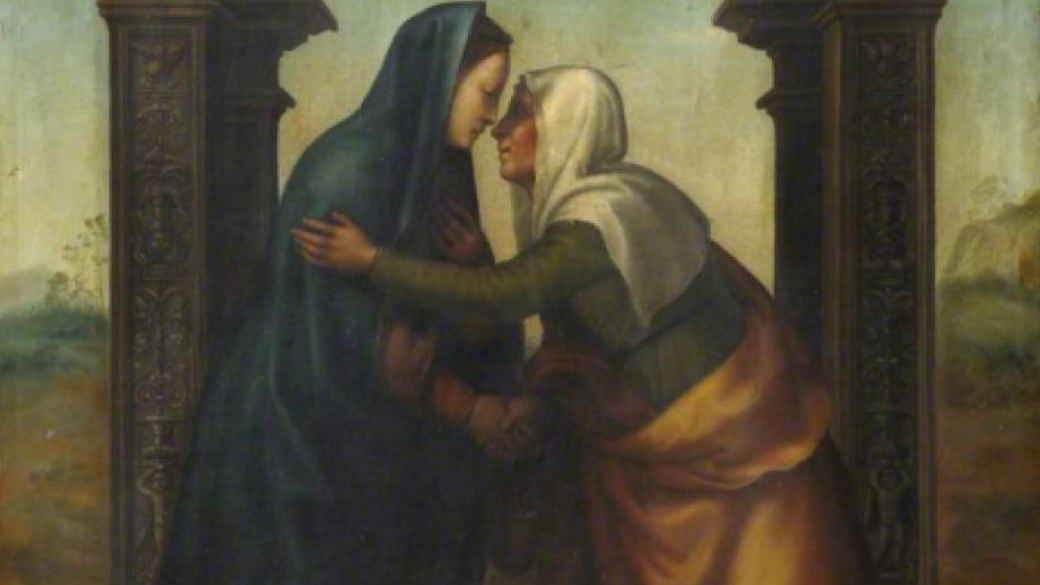 Editor’s note:  The following comprises the second chapter, third part, of The Gospel of Luke: An Exposition, by Charles R. Erdman (published 1936).  All spelling in the original.

My soul doth magnify the Lord,

47 And my spirit hath rejoiced in God my Saviour.

48 For he hath looked upon the low estate of his handmaid:

For behold, from henceforth all generations shall call me blessed.

49 For he that is mighty hath done to me great things;

And holy is his name.

On them that fear him.

51 He hath showed strength with his arm;

He hath scattered the proud in the imagination of their heart.

52 He hath put down princes from their thrones,

And hath exalted them of low degree.

53 The hungry he hath filled with good things;

And the rich he hath sent empty away.

54 He hath given help to Israel his servant,

Toward Abraham and his seed for ever.

56 And Mary abode with her about three months, and returned unto her house.
__________________________________________________________________________
The Magnificat, the lovely lyric which comes from the lips of Mary, has been sung during many centuries as one of the chief canticles of the Christian Church. Its occasion was a visit paid to her kinswoman, Elisabeth, by Mary shortly after she had received the promise of the birth of a son. Elisabeth on hearing the salutation of Mary addressed her in high spiritual ecstasy, declaring her supremely blessed among women because of the Son to be born, and wondering at her own honor in being thus visited by the mother of her Lord, by which phrase she means the mother of the Messiah; it is to be noted that the Bible does not contain the phrase “Mother of God.” Elisabeth congratulated Mary upon her faith and assured her that the promise upon which Mary relied was certain to be fulfilled.
The name of the song which Mary then sang, the Magnificat, has come from the first line in its Latin form, Magnificat anima mea Dominum. The model is that of the ancient hymn sung by Hannah when her heart, like that of Mary, was rejoicing in the promised gift of a son. The verses form a perfect mosaic of Old Testament quotations. The hymn was not addressed to Elisabeth or to the Lord; it is rather a meditation upon the mercy and grace of God.

According to the common division the song is composed of four stanzas of four lines each, except the third stanza which contains six lines. The general movement of thought seems to be from the goodness of God to Mary as an individual, to his consequent kindness to Israel as a nation.
The first stanza, or strophe, vs. 46-48, illustrates, as do those which follow, one of the chief features of Hebrew poetry, namely, the expression, in successive lines, of thoughts which are parallel or closely related. In her “soul” or “spirit” or innermost being, Mary praises or magnifies the Lord and rejoices in him as her Saviour. This salvation is not only for her people, but particularly for herself; it is not only political but also spiritual. It is to be wrought out by the gift God is granting to Mary. He has chosen her, an obscure village maiden betrothed to a poor carpenter, and has bestowed upon her such honor that all future generations will call her “blessed.” While realizing the honor she dwells most upon her unworthiness while recognizing what it may cost her, she declares her submission as a true “bondmaid” or slave of the Lord. Humility and faith could hardly be more sublime.
The second stanza, vs. 49, 50, centers the thought upon the character of God as revealed in his gracious gift. His power, his holiness, his mercy are praised. In his goodness to Mary he had shown his divine power, yet in accordance with the moral perfection of his revealed nature and in order to bring blessings to countless generations who would trust and reverence him.
In the third stanza, vs. 51-53, is an illustration of another feature of Hebrew poetry; not only is there striking parallelism, but here past tenses are used to describe future events; the results of the coming of the Messiah are stated as though already achieved. In contrast with the blessedness of those that fear the Lord, “the proud,” the rebellious, and unbelieving are pictured as “scattered” like the hosts of a defeated army; the oppressed are exalted while tyrants are dethroned; the hungry are filled and the rich are sent away “empty.” These results are to be regarded as spiritual as well as physical. Such reversals are certain to occur where Christ is accepted and those who receive blessings from him are the humble who are conscious of their need.
The last strophe, vs. 54, 55, emphasizes the faithfulness of God to his ancient promises which Mary sees fulfilled in the birth of her Son. In this saving help given to Israel, God is showing that he has not forgotten the mercy “toward Abraham and his seed” promised to the “fathers” of old. Only in Christ Jesus can be realized all the promises to Israel, all the hopes of the ages.
(Go back to previous chapter)
(Continue to next chapter)

Sermon: A Preparation for Christmas